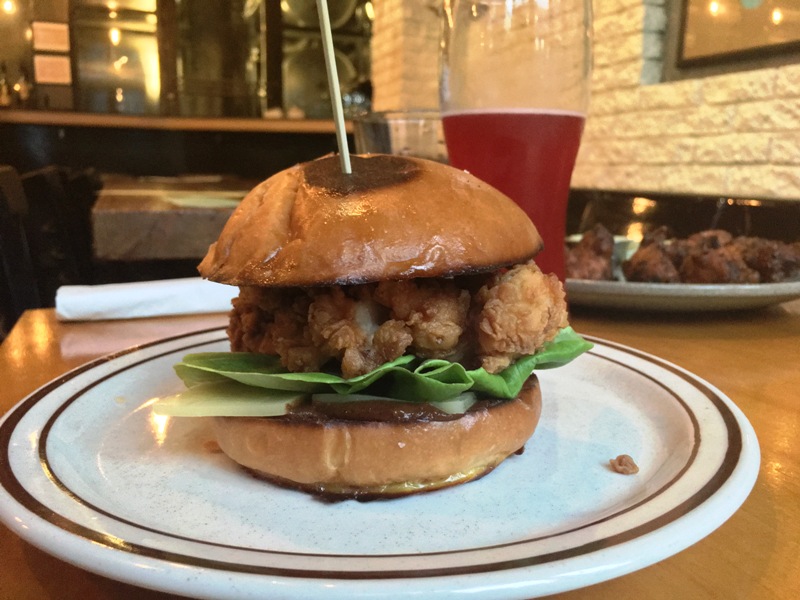 Few things evoke summer as much as beer and brutish bites, the heavier foodstuffs that bubble and sizzle. I’d suspect that chef Marc-Alexandre Mercier had this in mind for Réservoir, tapping into memories of open grills and ice-choked coolers to better couple the dinner menu with this bar’s primary draw: the taps. Why not adapt the menu to the food most loved by a beer-drunk crowd? Carbs and proteins abound.

I’ve relied on Réservoir for great beers for a while now, and its brewmaster Michel Zabitsky does good by us with a shifting selection of choices like IPAs, sours, whites, stouts and pilsners; never gimmicky, at most a fruity beer to greet the equinox with. This time, however, I wanted to see what was now happening since the kitchen came under new management. Mercier was known previously for a restaurant called Hôtel Herman, once located around the corner in a space that’s been emptied ever since that closure. The media has since tried to speak with the landlord since the closure was unexpected, and while I never got to try the place when it was action, I heard the collective sigh of relief when it was announced that Mercier was coming to Réservoir.

From what I’d seen and heard about Herman, this “new” venture was more pared-down. No seating, no reservations necessary and not much in the way of table service — I was nursing a beer well past the time it took me to look over a smallish menu of 20 items. It was definitely enough time to decide precisely what it was I’d be eating, as the server wasn’t much help in making recommendations or determining what was what. Fend for yourself. One tip: I simply ran my finger down the menu and asked for whatever it touched, which turned out to be a mess of having every plate shot to my table too quickly. Take your time.

There’s three menus here, brunch, lunch and dinner. The former two offer a lighter variety, but the dinner’s a different game. Not every option at Réservoir’s a heavy choice, as their snacks are lighter beginnings with cups of nuts or olives and the like, an oyster here and there. Appetizers are bright and fresh, but it’s the mains that are a good gamut of fried and saucy offerings.

Take the haddock accras with coriander mayo ($13) — Caribbean fritters with a crunch that gives way to an airy interior and a level of grease assuaged by its crisply spiked condiment. I would’ve dealt out more lime wedges with this one to cut through the oily qualities of both the sauce and salt, but nevertheless it was a great opening act.

Suppose it was luck of the draw that the whelks with jalapeno and iceberg lettuce ($13) arrived next to refresh an oiled tongue. For anyone not quite comfortable with the idea of sea snails, this dish might not do too well in terms of temptation, with the chewy molluscs rolled in a light sauce and hidden below chopped greens au naturelle. However, the slight spicy kick and seawater chew from the snail comes together surprisingly nicely, although its croutons of crumbled tortilla didn’t do too much for it.

As for the mains, the first to arrive was curry shrimp rolls with coconut and peanut ($16 for two). Buns flattop-fried to a golden hue, all of its ingredients could’ve been amped up just a touch; the shrimp was fresh and juicy, but were the most prominent note. That curry was lacking most of all, however this dish faced the challenge I find in a lot of seafood rolls where the bread will overshadow its contents.

The fried chicken sandwich with mole ($14) was suffering from somewhat of a similar situation, as the bread-plus-breading was the element a given bite would sooner focus on. Sure, the chicken was tender, the mole was rich — that is, when you tasted it. The accompanying slice of cheese was far from pungent enough to add anything, and that slice of lettuce seemed more a garnish than an element. Like the accras’ lime wedges, a slice or two more of something green might’ve changed the circumstances.

Whatever mumbling I might have been doing over the last two dishes went away immediately when it came to the frog legs and roasted Cipollini onions in a cream and sherry sauce, served with a thick slice of toasted bread ($15). What a dish: artful in its plating with a charcoal dusting, tender meat rolled in a rich and luxurious sauce and crust to lick the entire plate clean. For its price and execution, the whole thing felt like a steal, a dish that made me wonder if I was still in a bar. When it’s done this well, frog legs will supersede chicken wings any day, and as for the skeptics, it sure as hell tastes similar.

Misgivings about sandwiches aside, when pitting the quality of service against the quality of food in my mind, I wonder if Réservoir’s totally aware of what they have on their hands. Maybe it’s intentional; if this spot put more effort towards an identity as a restaurant, it could very well overshadow its identity as a bar. Either way, things are likely not to change at Réservoir, and we’re all the luckier for Mercier having found a spot to forge more menus. Given the brews and now the bites, this is a jackpot. ■