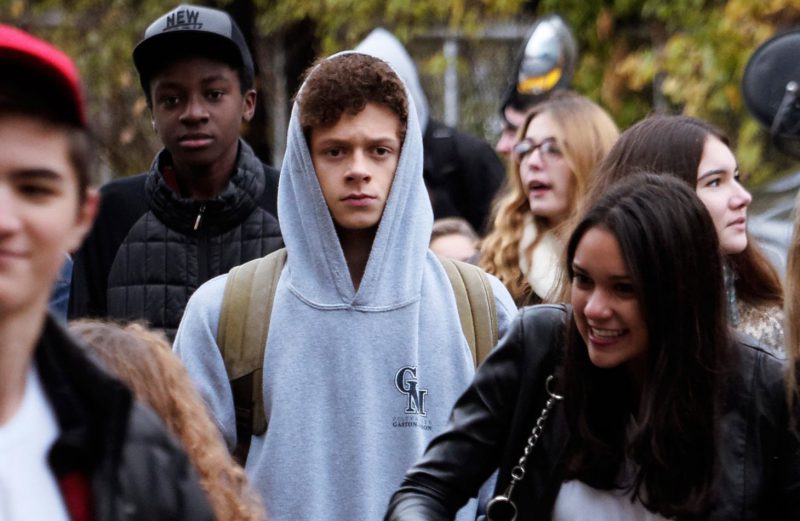 Quebec doesn’t have much of a tradition of teen movies. More often than not, it’s TV that took on the task of entertaining the 13–18 bracket and telling their stories, often through the time-heralded tradition of 27–year-old teenagers and their unbelievably dramatic tribulations. Our industry is no stranger to films starring teenagers, but they’re rarely (if ever)  of the high-school-movie breed, that traditional exploration of angst. The lack of a breakout Lemon Popsicle / American Pie / Porky’s / whatever else and the ubiquitous presence of cheesy shows like Watatatow and Ramdam has put filmmakers in a very particular position: they have all the room in the world to make honest movies about teenagers at a time when the rest of the world has already more or less covered that extensively.

La chute de Sparte therefore occupies territory that has only recently been explored in Quebec cinema. Based on a novel by Loco Locass’s Biz, La chute de Sparte follows the last high school year of Steeve (Lévi Doré), a sullen St-Lambert teenager who attends a high school where football players are king. Steeve has little interest in sports, choosing to escape in poetry, music and spelunking (!). He fantasizes about Véronique (Lili-Ann de Francesca), the head cheerleader, but her past relationship with Giroux (Karl Walcott), the football team’s hot-headed bruiser, makes her pretty much off-limits. A chance encounter with Giroux during a gym-class lacrosse game goes viral and Steeve suddenly finds himself both more popular and in the football team’s crosshairs.

Though he stops just short of being a Mary Sue, Steeve clearly means a lot to Biz and serves as a bit of an idealized version of the Québécois teenager. Fiercely independentist, he thoroughly despises the place the English language has in the world (“The whole fucking world is in English,” he spits at his mother to justify his choice not to study at Champlain St-Lambert) and defends long-dead Québécois poets with a fervor that teenagers usually reserve for the Metallica vs. Iron Maiden debate. Steeve is clearly at least partially designed for the writer to defend and uphold the things that he loves, but it almost certainly works better on the page than on-screen. Case in point: the film’s first 20 minutes or so are very light on dialogue but practically saturated with voiceover. Presumably taken directly from the book, the voiceover is considerably more writerly than anything else that follows — a particularly noticeable decision when the voiceover eventually trails off to become practically non-existent.

In fact, much of what doesn’t work in La chute de Sparte comes down to dosage. I haven’t read the original novel but it’s clear from this final product that it has a narrative sprawl that’s unlikely to be replicated faithfully in a single film. That means, as it does in every adaptation, that the story has to be pruned and trimmed into a workable format — which is where it gets tangled. La chute de Sparte alternates between serious dramatic moments (inferences of teenage domestic abuse, subplots about homosexuality and suicide) and more typical teen-movie moments (a fantasy sequence in which he imagines himself hooking up with his comely French teacher, a wild Halloween party in which his pal is dressed as a used tampon) pretty freely. While it’s true that teenage life shifts from the tragic to the puerile in the space of an instant (or certainly feels like it does), the film’s short 84-minute runtime doesn’t really allow Dubois and Biz to work everything in organically. It feels at times like a Greatest Hits package culled together from their favourite stuff from the book.

Don’t mistake that for incoherence or incompetence, necessarily. While the film doesn’t earn every radical shift it goes for, its standalone parts are undeniably effective. It’s particularly well-cast, with believable teenagers that stand a million miles away from the overdramatic banalities we associate with after-school specials. (Particular props to Simon Duchesne, who steals many of his scenes as the acne-ridden class clown.) The film is dynamically put together, propulsed by a hip-hop-heavy soundtrack, but its stylistic accents (chiefly dream sequences) are used sparingly, betraying a film with more visual imagination than it can actually do anything with.

Even though I haven’t read the source material, it seems painfully obvious from the final product that La chute de Sparte simply wasn’t made to be adapted in this way. When the film takes a sharp turn towards the dramatic in the last 15 minutes, it’s affecting — but it also feels unearned, an overly radical shift in a movie that minutes before culminated its big party scene with the main character spasmodically breakdancing in a drunken stupor. It’s not that playing with those elements is impossible on the silver screen, but there’s a lot less room to play than on the page. ■

La chute de Sparte opens in theatres on Friday, June 1. (The film is screening with English subtitles at the Forum.) Watch the trailer here: