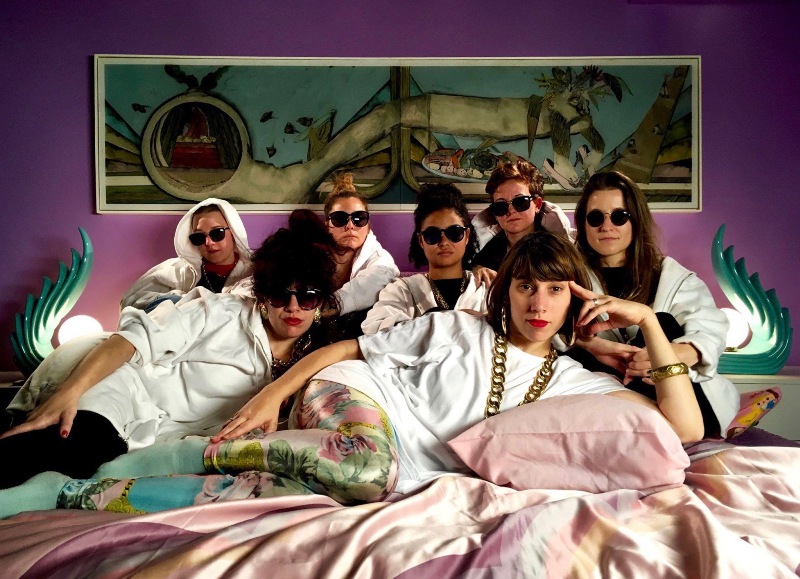 In a rap scene dominated by male voices, Donzelle stands confidently apart from the pack.

The Québécoise artist (who rhymes primarily in French, but also in English and Portuguese) has released her second album, Presse-jus, after nearly a decade away from the music scene.

Whether or not you’re familiar with her 2008 debut Parle parle, jase jase, or her shows, featuring a badass crew of deadpan dancers, one listen to Presse-jus will drive home the significance of Donzelle’s return to the scene in 2018.

“The project is about music but it’s also about feminism and all these other things that are really important to me,” says Donzelle (aka Roxanne Arsenault, a curator at Centre Clark by day). “I’m not very good at talking about stuff that isn’t real to me. (The lyrics) might be exaggerated but the core of the songs are always subjects I relate to.”

“It’s really hard to write songs about being a mother without being too cheesy,” she admits, referencing hits and misses on the subject in art she dealt with while working at a feminist art gallery. “It’s hard doing work about maternity without using stereotypes, but it’s such an important part of my life that I can’t pretend it’s not there.”

While the persona on her records, in her videos and onstage cycles through modes that may appear similar to those of other female rappers — shifting from sensual to tough, with stops along the way — the innate humour of a lot of her material and her mandate to keep it real differentiate her from other women in hip hop as well as the men.

“I’m not gonna pretend I had a difficult childhood or come from a tough background — I don’t (focus on) stereotypes or stigmas around rap, even though I totally respect that. But part of the reason I wanna make music is because I think there’s a lack of diversity in rap today.”

The beatmakers who contributed to the record include Pierre Crube (Numéro#), Stéphane Lafleur (Avec pas d’casque) and Fabrizia Difruscia (Random Recipe), with vocal contributions by the likes of Miss Eaves and sound engineering by Christophe Lamarche-Ledoux and Pascal Desjardins. Also on board on the choreography and costume front are the aforementioned TIGNA$$E and Donzelle’s crew of dancers (who range in age from 24 to 42), not to mention the crew behind the videos that have been made for each track on Presse-jus — it’s the first Québécois video album to be distributed by Apple Music, and while three videos have been made public so far, one video will be released every month for the next seven months. There’s also a 68-page book accompanying the album — this is no minor endeavour.

“It’s a multidimensional project that’s quite epic — that’s part of the reason it took 10 years!” she says. “It’s really this creative process and exchange between a lot of people, whether it’s in the music or from the music to being interpreted in a video or from the video to being interpreted into a choreography on stage. There are so many creative minds at work on the project; it’s quite beautiful to see realized.” ■