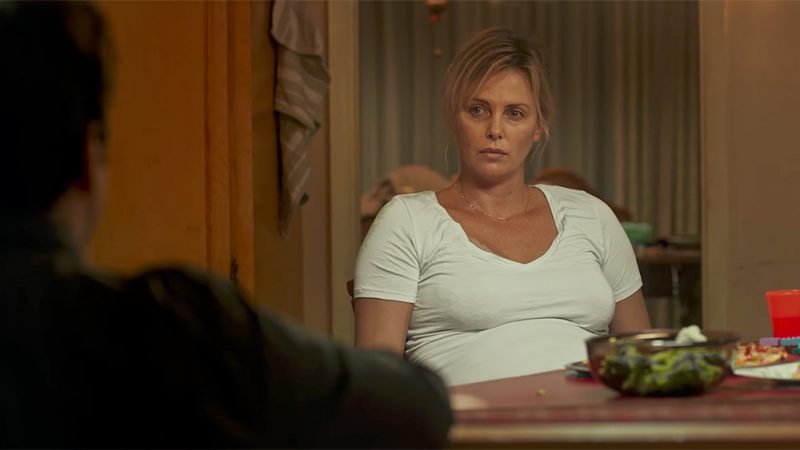 There’s not much that our pop culture has more trouble with than our image of motherhood. We hold up mothers to an impossible standard of excellence; mothers must be above reproach at every step, even if we accept that fathers be semi-disinterested dolts prodding at a rapidly-shriveling hotdog on the barbecue. If mothers are not shown to be high-strung perfectionists in our films and TV, they’re more often than not relegated to a supporting role. A mother who appears to be struggling with her choice to have children will often pop up in a supporting role in a rom-com where two single people can’t quite line it up to become like the people they deride. The shorthands for motherhood are, simply put, kind of a bummer.

(I won’t even venture out into the world of mommy blogging, a world that I am terrified by and in awe of on the daily. As I understand it, though, high-strung perfection and caustic self-flagellating are common tropes there, too.)

To that extent, Jason Reitman’s Tully does a fairly amazing job of balancing its humour and its more delicate elements. The character of Marlo, as written by Diablo Cody and depicted by Charlize Theron, inhabits no particular space of clichéd motherhood, even if she does straddle it at times. When she’s told by a random stranger at a café that decaf still has trace amounts of caffeine and is immediately stared down when she chooses to ignore the unsolicited advice, she doesn’t go off on the stranger like a Bad Mom. When she loses patience at her five-year-old kicking the back of her seat, she doesn’t spew forth the kind of honest-to-blog dialogue we’ve come to expect (perhaps unfairly) from Diablo Cody. If Reitman and Cody’s previous collaboration, Young Adult, was a mature film about immaturity, Tully sees the two working with complete maturity – a far cry from Reitman’s cloying and frankly embarrassing work in Men, Women & Children and Labour Day.

Marlo (Theron) is the mother of eight-year-old Sarah and five-year-old Jonah; when we meet her, she’s just about to give birth to a third. Despite the best efforts of her checked-out-but-supportive husband (Ron Livingston), Marlo is burning the candle at both ends (especially when it comes to atypical Jonah, who is all but being kicked out of school towards a more specialized one) and starts to unravel when the third child is born. The parents decide to take up Marlo’s wealthy brother (Mark Duplass) on his offer to fund a night nurse to come in and take care of the baby at night while Marlo sleeps. The introduction of free-spirited twentysomething Tully (Mackenzie Davis) re-energizes Marlo, but the fact remains that Tully is only a temporary solution.

The danger with Tully, I think, would be to lean too hard on one side or the other of the fence. Either it becomes a harrowing drama about the psychological tolls of motherhood or it becomes a sort of Bad Santa-esque farce about how untraditional values don’t necessarily reflect poorly on your skills as a parent. It’s neither of those: for much of its running time, Tully functions as a sharply observed character sketch that sometimes matches the thematic concerns of Young Adult. It’s not only about the daily perils of parenthood but of the permanent and irreversible way in which it shapes our being. Marlo is so concerned about the way she used to be that she builds Tully up to be this ideal image of the past when, in fact, they have much more in common than she can imagine.

Tully also goes a long way towards reminding us how versatile Theron can be as a performer. She’s mostly worked in huge tentpoles since Young Adult, building on the badass goodwill that she (understandably) racked up with Mad Max: Fury Road. Her performance in Tully is remarkable for its lack of artifice, much less a glammed-down movie star version of real life than one might assume from the much-publicized fact that she gained 50 pounds for the role.

In its third act, however, Tully moves into much choppier and familiar waters. Without revealing too much about what actually happens, Tully takes a sharp twist of a nature that would be more familiar in a different genre. It doesn’t actually switch gears into a different genre, mind you; it just employs a very, very well-worn trope that isn’t what you’d necessarily jump to in a pensive dramedy about motherhood. It’s not even that Tully doesn’t earn the right to become the movie it becomes, it’s that the movie it becomes is markedly less interesting than the hour that preceded it.

It’s also likely that your mileage may vary on exactly how this third-act twist will work on you. I have zero children and a equal amount of uteri with which to potentially make one, and it’s the highly personal and specific nature of Tully that really sets it apart from scores of Sundance hopefuls about a similar relationship. Where it ultimately ends up isn’t really as important as how it gets there. ■

Tully opens in theatres on Friday, May 4. Watch the trailer now:

From femme girls to bros to the gender-androgynous, people are loving this new brand.