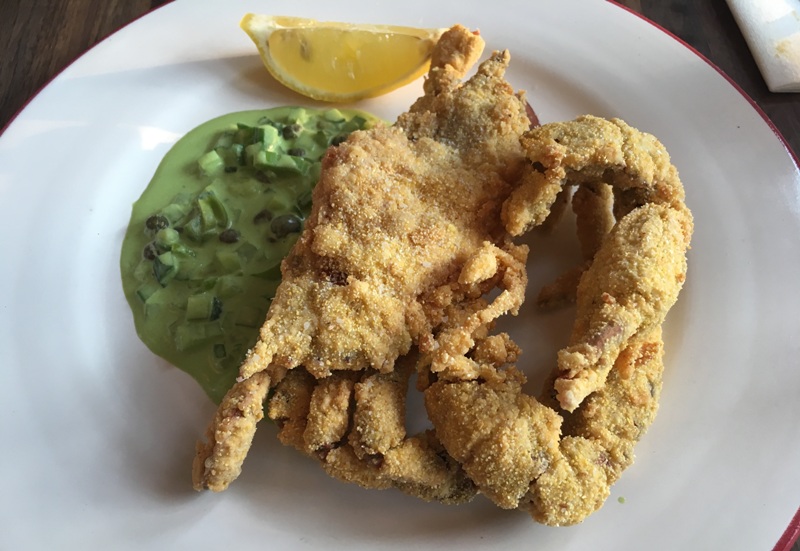 It’s quite a few dishes deep into dinner at Mon Lapin when the person I’m with, after savouring a bite, remarks suddenly that “this” is the reason that he goes out, pointing to the plate. Was it what we were eating at that moment? No, he corrects me, it’s that moment when he finds a new flavour previously undiscovered. Like a small pilgrimage has ended.

Quebec talks up its terroir at every turn, and true, the freshest ingredients plucked from a 100-mile radius are undoubtedly good, but I keep thinking that these are only tools — it’s what’s built from them that matters more.

This latest venture from the Joe Beef team was already sitting pretty before it had even unlocked its doors in Little Italy. The hype was strong with this one, and compared with some of the group’s other locations, it’s certainly appealing to know a seat might be available if you arrive early enough (no reservations). My visit was early in the week, only an hour after service started. That kind of strategy is recommended, as I don’t want to even imagine the line-up of hunger-pained patrons on the weekend. 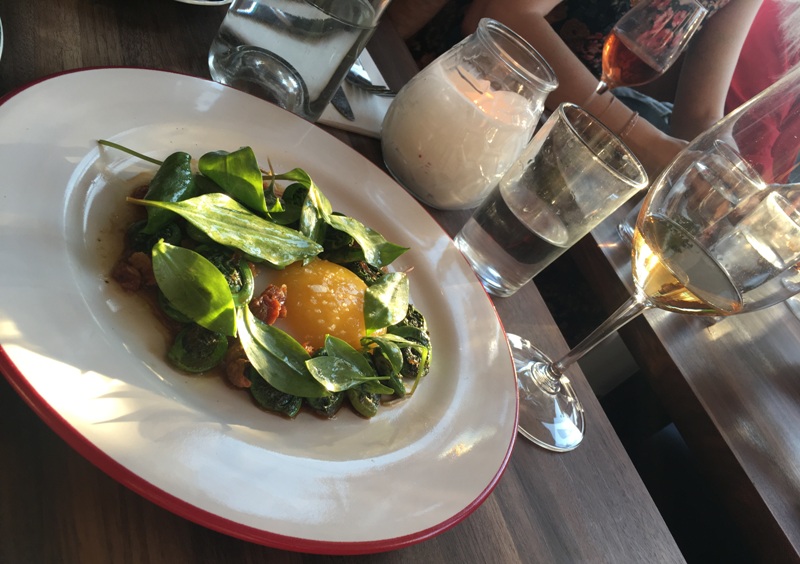 Goose egg with fiddleheads and chicharrón

My friend and I were swiftly greeted at the door and taken to a somewhat weirdly deemed “standing bar” — more of a divider between the hallway to the bathroom and the kitchen, about four feet high and the width of a dinner fork, leaving me feeling like one wrong move on either my part or the cooks’ would be disastrous — but we were tended to swiftly all the same. The waiter was quick to suggest one of the bottles of wine that had been opened for the evening, and from then on, all the house choices were well employed. That sommelier Vanya Filipovic is something else — each successive glass mingled seamlessly with each dish that night, as unexpectedly pleasant as when two never-before introduced people so happen to get along.

The menu by Marc-Olivier Frappier (Joe Beef, Liverpool House) and Jessica Noël (Candide) is broken down into a series of snacks to be taken before other dishes that, through whatever combination taken, forms a meal. Dave McMillan has said in recent interviews the ingredients have been carefully sourced, so it felt best to pick from what was precisely in season at the time. Then again, from the vantage point of the standing bar and watching the game of catch-up with Frappier calling chits as the cooks hustled, we went for a simple starter: ham from the neighbourhood covered in cheese and drizzles of tomato brown butter ($14). The meat being of that soft, pink and homey York ham variety, it was a plate of soft textures and flavours, and its earthen yet sweet butter turned what could’ve otherwise been a run of the mill splash of charcuterie into a plate plucked clean.

By now a table was available, giving us time to enjoy the interior, peppered in illustrations and trinkets that, combined, gave an impression of something between early-20th century cookbook art and the Moomins. Country vibe indeed, save for the elegant wine cart sitting smack dab in the centre of the place. We were a little squashed into our table and sometimes struggled to hear one another speak among the other 30 diners, but hey, the food.

We followed up that ham plate with tortelli stuffed with a brandade of haddock (not salt cod) rolled in a pool of ham butter and ciboulette ($24). The tricorne hat-shaped pasta melted away into its accompanying butter, and this was when my friend made that remark about new flavours — not the first nor the last time that night — and I’m inclined to agree. House pasta has the benefit of freshness, but can be so much more given how it’s tossed, stuffed and paired. This one took top marks compared with the others, though each had their own loveable quality.

Take the sliced whelk with black pepper and watercress ($13), a dish that seemed to try to embody the peppercorn with only the salt of its seafood to cut through it; as conceptually enjoyable as that was, there was some palate fatigue there. It was the same case with the sunny side goose egg served with a ring of fiddleheads and chicharrón ($15), as the greens’ plump sweetness and the enjoyable crunch of pork rinds were eventually overthrown by a popped and gushing yolk — this one gets cred for its bombast, but I could’ve done without it. Lastly, a blue crab given a schnitzel treatment (without the pounding) with a brilliantly green sauce of brunoised cukes and capers ($26). It seemed a little off to seal up such juicy seafood in a case of fried flour and cornmeal, but the sauce did add notes of zest and succulence.

If none of these dishes interest readers, I can assure you that chancing by Mon Lapin for dessert and wine is sure to please. My friend and I had only so much space left in us, and wanting to try something other than the buckwheat cake that’s been showing up in my feeds time and again, I went with fried strawberries with a mound of diplomat hazelnut cream ($11). There was something so heartwarming about a spoonful of hot fruit with a cream that was thick to the touch and soft to the tongue that I’d return for that plate alone, and a glass of tart ruby wine to go with it.

To be sure, the Joe Beef crew haven’t had this spot open long enough for its menu to reach its apex just yet, especially considering that the seasons will demand a shift of ingredients. When thinking of the bounty of the countryside, however, it’s nice to see it elevated atop the tablecloths of this city’s premier fine dining establishments, but I’d give all that up for the rough and tumble feel of Mon Lapin any day. ■