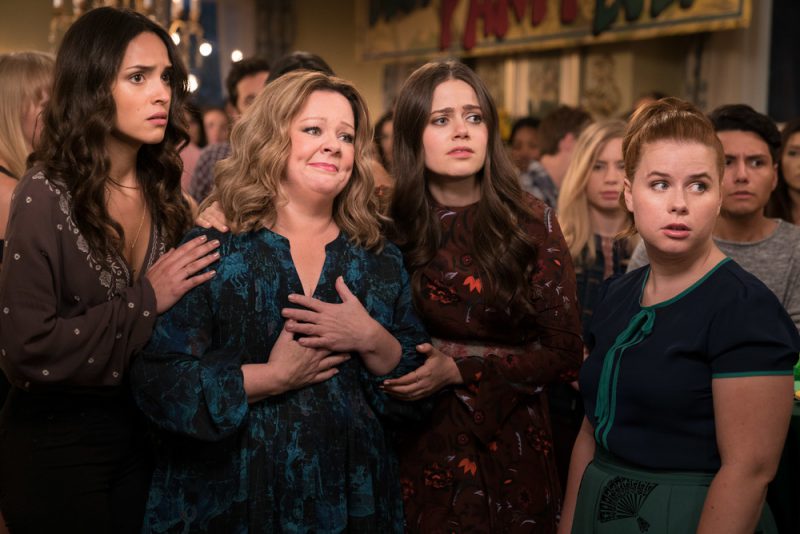 One of the most consistent disappointments when rewatching a beloved film from my youth is how much the pacing of comedies has changed. Movies that seemed like breakneck slapstick comedies in the ’80s feel downright pastoral now and the focus has generally shifted away from plot and mood towards a more setpiece-based construction.

I wish I could tell you that the latest Melissa McCarthy vehicle is retro in that way, but really what McCarthy (who co-wrote and co-produced with her husband Ben Falcone, who directs) does here is combine the worst aspects of a leaden ’80s star vehicle with the worst aspects of a present-day comedy. Life of the Party somehow manages to line up everything that goes wrong with comedic vehicles in one film — even if those particular aspects sometimes directly contradict each other.

Life of the Party feels improvisational in the worst possible way. It has the unsure footing and tonal inconsistencies of a first table reading in which everyone is still trying to find their voice and character as they sound out the humour of the dialogue for the first time, and yet it feels like everyone is ad-libbing and tacking on punchlines every time they speak. It racks and stacks subplots like they’re going out of business, but almost any stake the film establishes is solved and done away with in the next scene. It’s simultaneously a janky mess and a thoroughly middle-of-the-road, quadrant-pleasing comedy that takes no chances. Rarely has a comedy vehicle been so much while also being so little.

Deanna (McCarthy) is dumped by her husband (Matt Walsh) while dropping their daughter Maddie (Molly Gordon) off to her last year of college. Deanna has never worked since dropping out of college to have Maddie, and the seismic shift in her life leaves her with a lot of free time. She decides to return to college to finish up her archeology degree, but she picks her alma mater — where her daughter currently lives in a sorority with her three closest friends (Gillian Jacobs, Adria Arjona and Jessie Ennis). Deanna takes to the college lifestyle rather well despite her daughter’s objections, balancing her studies with every college-movie subplot imaginable: mean girls, hunky BF, remarried husband with an ice queen new wife (Julie Bowen), a fear of public speaking, lack of money for tuition, etc.

Almost every joke in Life of the Party runs untethered; so many of McCarthy’s jokes feature a punchline in the initial 30 per cent of the delivery, which is then tagged with blathering that trails off into a poor facsimile of “cringey” humour. The film does tone down the pratfalls and humiliation comedy that has dogged the worst films of McCarthy’s career, though she gets a doozy of a setpiece in the form of an interminable anxiety attack/oral presentation that ends with her covered in sweat and bits of Kleenex on the classroom floor.

The supporting characters’ personalities change from one scene to the next, with Jacobs (whose character has spent the last eight years in a coma) mugging her way through scenes where her intelligence seems to have been determined at random. One character’s entire arc is contained in a scene in which she yells that she’s afraid she’ll never find love — a surprising revelation, indeed, considering her primary function thus far has been to stand at the edge of the frame. In fact, the entire first half hour or so of Life of the Party is almost completely devoid of laughs, even if it is ostensibly filled with jokes.

The most charitable way you could qualify Life of the Party would be to say that its aimless and slack feel imparts it some loose, hang-out charm — but I won’t be that charitable. The fact is that it isn’t the actors’ fault or even the script’s fault, even if the best case scenario remains a thoroughly familiar vehicle. Life of the Party is actually a fairly comprehensive case study in comedy direction and how not to do it. It’s badly blocked, badly edited, has little-to-no rhythm and feels largely unfinished, like a sloppy work print from which no one bothered to excavate the joke. Even the great Stephen Root is wasted as Deanna’s father, a lunatic prone to bits of raving and gun-toting whose rants contain not a single workable punchline. When you cast your film with the kind of people who save routine comedies for a living and manage to get some of their career-worst work out of them, there’s not much hope.

To give credit where credit is due, Life of the Party does pick up towards the middle, thanks in large part to increased participation by Maya Rudolph as Deanna’s best grown-up friend. It becomes begrudgingly watchable in the way that I’d first expected it would be as a store-brand comedic vehicle, but it never really surmounts how flaccid and terrible the first half-hour is.

Truthfully, there are maybe 20 minutes of usable material and a lot of bless-their-heart wheel-spinning and improv in Life of the Party, so putting the blame on anyone seems unfair. It’s not just that these people are capable of so much more; it’s that it’s barely anything at all. ■

Life of the Party opens in theatres on Friday, May 11. Watch the trailer here: