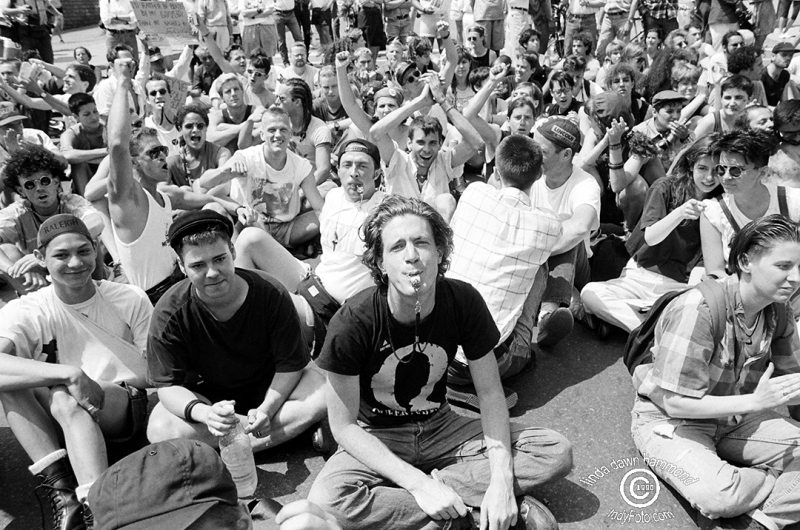 Upon learning that David Shannon had died in early February after a battle with liver cancer and a lengthy struggle with HIV, I experienced the sadness one expects when they lose an old friend and colleague. But something else struck me in the weeks that followed: I spoke to many LGBTQ friends about my age who had distinct memories of being in Montreal and picking up the Mirror to read David’s biweekly column, Out in the City.

David began Out in the City in 1988 with his friend Don Rossiter, when it was mainly a listing of goings on about town of interest to queers. The events were written up with plenty of pithy commentary, and eventually David would take over the column himself, occasionally rotating the column with other queer men. (A women’s column, Female Persuasions, alternated with Out in the City.)

This became the first regular gay column to appear in an alternative weekly newspaper in Canada. And for many of us (I was an undergraduate student at Concordia University at the time), Shannon’s scrappy, bitchy, take-no-prisoners style left an indelible impression. In the wake of his death, I ventured to the Quebec Gay Archives to wax nostalgic over the column.

David often took stances that might make more mainstream gays uncomfortable. He didn’t care; nothing was sacred. In his Aug. 4, 1989 column, Shannon slammed police for announcing that they would be clamping down on park sex. Special attention would be paid to Mount Royal Park, which Shannon noted was a favoured cruising ground for the city’s men who were having sex with other men. “It seems that with mounting violent crime in our streets and escalating domestic violence,” Shannon noted, “gay sex becomes an easy scapegoat.”

If there was a running theme in Shannon’s column, it began early. “He was constantly pointing out that the society we believed we lived in — that of a liberal, open, tolerant Montreal, Quebec and Canada — wasn’t the reality,” says Michael Hendricks, a Montreal-based activist who worked alongside Shannon for many years in response to police indifference. “David was committed to pointing out the shortcomings, especially in Quebec, where there was considerable pride about it being the first province or state in North America to have gay rights legislation. David noted that in terms of equality on many fronts, none of that promise was actually being upheld.”

In a March 19, 1992 column, Shannon foresaw the winning strategy of the American GOP, and argued it was part of an international trend, accurately predicting a huge part of the campaigns of George W. Bush and Trump: “If you can tap into hate, you can construct a road to power. The course seems to be veering to the right… and however exhausting it may be, we are going to have to double the pace if only to stay in place.”

Shannon was renowned for having a fiery temper; if he felt something needed to be defended or criticized, he did so. In his April 18, 1991 column, Shannon defended Paris Is Burning, the landmark documentary about trans performers of colour who were putting on drag balls in Harlem, when the film became charged with cultural appropriation. Rather than attack the white lesbian who made the film (Jennie Livingston), Shannon argued that the “fault lies more with the likes of Malcolm McLaren and Madonna who co-opted the by-products of the house ball culture and turned them into voguing dollars.”

When the AIDS Quilt made its debut in Montreal in 1992 as part of its international tour, Shannon described how powerful the installation could be. But typically, he didn’t hold back, criticizing something most would have thought untouchable: “The quilt may appear to be a tribute to the lives of the dead, but it is, with few exceptions, the product of survivors. One can’t help but think that if they channelled their energy, their creativity, their anger, towards action, that if they committed themselves to making governments more responsible, researchers more diligent, society more informed, then talk of Nobel Prizes would focus on the discoverer of a cure rather than the creators of a shroud.”

When Montreal was struggling to try to put on a Pride parade in ’92, Shannon trashed the organizers for actually caving to critics and asking attendees to refrain from cross-dressing, baring bottoms or breasts or carrying flags: “If this is the best we can offer when celebrating our diversity and pride, we may as well join the Shriners — the outfits are kind of funky, and at least they give money to charity.”

Respect and love for this great champion of all things queer. His columns aren’t readily accessible online, nor published anywhere. We desperately need a David Shannon anthology: local Montreal publishing houses, are you listening? ■