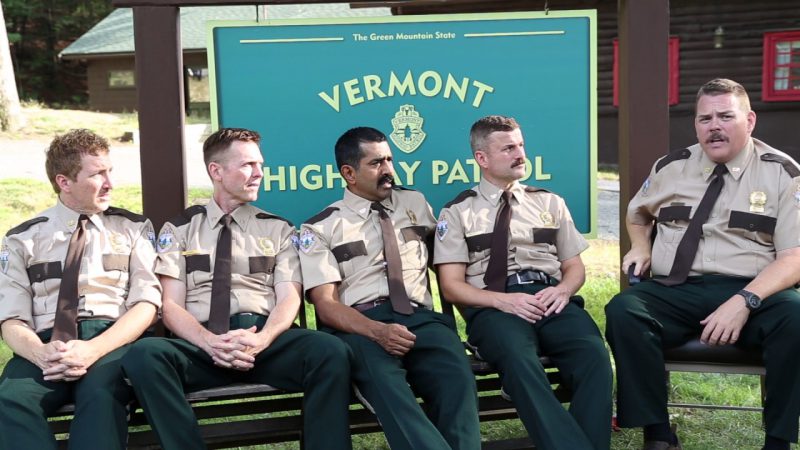 I am a straight white man in his early 30s. Some would argue that it is impossible to discriminate against my kind, and they would not be wrong. I certainly am never in a place where a major motion picture reduces and silences me, and yet I don’t know how else to describe what happened during Super Troopers 2.

An endless barrage of low-effort Canadian stereotypes that make the last couple of Kevin Smith movies feel like Mon oncle Antoine, Super Troopers 2 barely looks like it’s going out of its way to be offensive. It’s offensive in that now-quaint turn-of-the-century way where shots to the nads and endless descriptions of the way in which your mom will be railed were considered a real thumbing-of-the-nose to the establishment; it’s offensive in the vague way that Newfie jokes are offensive if you’re from Newfoundland, I suppose, except the butt of the joke here is the hon-hon-hon hockey-loving Québécois dumbass, dousing his fat ass with maple syrup and sticking his dick in the hairiest of moose. It would all be acceptable – and perhaps forgivable – if Super Troopers 2 ever approached being funny.

Far be it from me to minimize the straight-up institutional damage that stereotypes like Stepin Fetchit have caused to black American life, but that’s the closest I can come to describing the sheer fucking amount of thoroughly unoriginal French-Canadian stereotypes that Super Troopers 2 puts forth. No well-polished stone is left unturned; one joke is literally two characters yelling every French term they can think of to each other (croissant! Les Misérables! Camembert! Au Bon Pain! Gérard Depardieu!). But lest you think that an identity bug has crawled up my butt about this particular movie, rest assured: the jokes not about French-Canadians are shit, too.

The original crew of dumbass state troopers (Jay Chandrasekhar, Paul Soter, Steve Lemme, Erik Stolhanske and Kevin Heffernan) have lost their jobs due to an in-field bungle that has left Fred Savage very dead. They’re biding their time doing construction when their old captain (Brian Cox) comes to them with a very special mission. It turns out that the boundaries of the Vermont-Quebec border are not exactly as they were originally thought to be, and the troopers are needed to assist with the smooth transition of power from three aggro Mounties (Will Sasso, Hayes MacArthur and Tyler Labine). Of course, there’s nothing these three ding-dongs like better than pranking each other with testicular trauma and taking massive amounts of drugs so they can abuse their power hilariously, but even that has to be interrupted for a bit of plot machinations involving smuggled drugs and the Quebec town’s charismatic French former hockey player mayor (Rob Lowe).

Forget that police officers abusing their power and toying with people they stopped on a routine traffic violation is much less funny these days. Forget that despite a woefully thin plot, the film takes nearly 45 minutes to get started (preferring, instead, a long and unfunny dream sequence cold open featuring Seann William Scott and Damon Wayans Jr.). These are criticisms that could easily be brushed off with “relax, bro, it’s a stoner comedy” and “get the stick out of your ass, Jacques le Croissant” if it were not for the fact that the entirety of the film is flabby, laboured and unfunny. When the gags aren’t just dropping references to Justin Trudeau in a thick hoser accent, they’re sharply divided between plumbing the greatest hits (Jim Gaffigan returns to squeeze some more juice out of the now-legendary “meow” bit), rambly improvisational bits that stretch out to infinity and a perplexing subplot in which Chandrasekhar’s character becomes addicted to female fertility drugs, leading to him “acting like a bitch” and lactating at inopportune times.

It’s been 17 years since the first Super Troopers film; one could charitably say that the Broken Lizard crew has had trouble recapturing the things that made their first film a cult classic. One could also less charitably say that they’ve gotten significantly worse at this, as Super Troopers 2 feels more explicitly like the work of a green comedy troupe than the first one ever did. It’s crude in both the literal and metaphorical sense, consistently going for the easiest, broadest and most predictable take on a situation. Case in point: it’s a movie ostensibly making fun of Quebec and the broader cultural touchstones that the average American may know about us that routinely confuses English Canadian culture and French-from-France culture (Emmanuelle Chriqui is on hand as the local French-Canadian babe but, even though Chriqui was born in Montreal, she speaks with a flat international French accent). We’re easy as hell to make fun of, but at least have the decency of knowing more than vaguely what it is you’re making fun of.

Ultimately, the biggest sin Super Troopers 2 commits is not its cavalier treatment of Canadian stereotypes just for the hell of having someone to make fun of; Canada, as a whole, will survive. It’s that it’s boring and unfunny as shit, an undeserved victory lap around the block that only serves to ruin whatever fond memory you may have had of the original while also firmly implanting the idea that I no longer want to see this particular configuration of five dudes with moustaches do anything related to shaving taints and farting ever again. A bad comedy is the direst of dire prospects, and Super Troopers 2 manages to not even clear the bar on that dubious accomplishment. ■

To vote for favourite Montreal people and things in this year’s Best of MTL reader’s poll, click here.