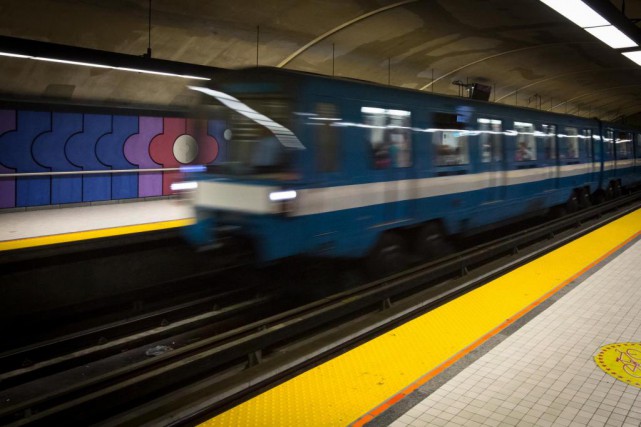 The news came at a press conference Monday in St-Leonard, where Trudeau and Couillard joined Montreal mayor Valérie Plante to announce details as well as to present an adrenaline-soaked PowerPoint presentation featuring 3D images of colossal metal testicles.

The extension, which will run along Jean-Talon Street, is estimated to result in 5,000 fewer cars on the road, giving longtime commuters the opportunity to relax on the metro and enjoy those big ol’ balls.

Quebec and Ottawa have pledged a large, beefy sum of $362-million to study the project. The total cost of lengthening the blue line is pegged at $3.9-billion, with approximately $1-billion going directly towards a macho as hell aesthetic, explained Couillard.

“If we’re really going to extend this thing, we need to make sure riders are satisfied,” said Couillard, visibly pleased with his double entendre, “which is why every single train on the blue line needs nards suspended from its undercarriage.”

Many Montrealers are welcoming the new transit options, noting the boost in travel efficiency, increased property value along the route and 5.8 extra kilometres of unfiltered testosterone.

“This is a great start,” said Craig, 32, proud owner of a fat sack. “It takes me almost an hour to get downtown from my place in St-Leonard,” he went on. “I just hope since they’re planning on making room for metro nuts, they’ll consider widening the seats to make room for mine.”

Despite widespread enthusiasm, critics are skeptical as to whether these plans— and scores of big, bad danglers— will fall by the wayside. Couillard was quick to reassure the public of the governments’ intentions to follow through with the project.

“We are committed to this project,” said Couillard seconds before downing a Monster energy drink and crushing the can on his forehead in a manner that suggested he’d done it before. “We have set the money aside and are actively in the process of expropriation,” he continued. “Fight me.”

Construction is set to begin by 2020 and the extended metro line is expected to be fully operational by 2026, which Couillard and Trudeau agree isn’t nearly as fun as if it were to be completed by 2069.

For her part, Mayor Plante tried several times to discuss the proposed Pink Line but abandoned her attempts after Trudeau spontaneously removed his shirt and repeatedly shouted “Come at me” into a camera while Couillard handed out miniature truck nuts to members of the press. ■