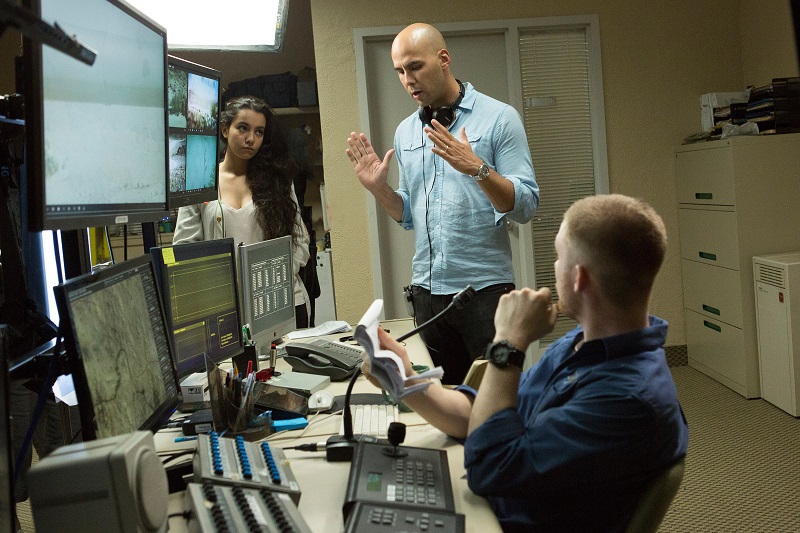 Kim Nguyen is not the kind of filmmaker who goes easy on himself. After shooting films in the relatively inhospitable climates of Congo and Nunavut, he takes on a different challenge with Eye on Juliet: making a movie about a relationship between two people who remain thousands of kilometers apart throughout.

Joe Cole plays Gordon, a young American man who works security for a shadowy company. The security Gordon provides is not muscle outside of a club; every day, he goes to a nondescript building in an industrial neighborhood and protects an oil field in Northern Africa through a series of small, spidery robots dubbed hexapods. Ageing technology that’s prone to breaking down, the hexapods are equipped with translation technology in order to scare away people who may be wandering too close to the pipelines or those who attempt to actually steal the oil. It’s through this dull surveillance work that Gordon notices Ayusha (Lina El Arabi), a young woman who has been promised in marriage to a much-older man and retreats to the desert to spend time with her lover with whom she dreams of running away. Gordon becomes extremely invested in Ayusha’s life from thousands of miles away, using the limited means afforded to him by the unreliable hexapods to try to help her escape.

Eye on Juliet is a bit of a fable for modern times, a mix of timeless storytelling and timely technology. There have been a few films about drone warfare, none of which were particularly successful because what makes drone technology so terrifying and compelling — its passive, almost videogame-ish approach to death and destruction — is also what makes it so dull to watch on the silver screen. Consequently, Nguyen adapted existing technology to his story and not the other way around.

“It’s a film that deals with technology and modern times, but in a very symbolic way,” says Nguyen. “When I had this idea about a relationship between two people who are separated by 6,000 kilometers, one of the challenges became creating a proximity between the two. The easiest way to do that was to use existing technology. We immediately saw that that created a distance that would make the film extremely boring. It’s not really a science fiction film to me, it’s what I’d call ‘parallel reality.’ It’s close enough to current technology, but instead of being flying drones, it’s this little robot. That’s exactly why I had to invent the particular technology: to create a proximity between the characters.”

The hexapods depicted in the movie are fictional, though the designs by Nguyen and his team have some basis in reality. “The drones that existed for this purpose are more like mini tanks that the police use with a little camera to check on explosions,” says Nguyen. “There wasn’t much life to those robots. I looked at what DARPA was doing on the military side and it was really creepy  — it truly scared me, what they’re doing, but it guided me towards anthropomorphia in order to bring life to the hexapods.”

The film’s hexapods are described as being ancient: they’re slow and cumbersome and almost every hexapod depicted on screen short-circuits at one point. “I have to thank the very first Star Wars film for that,” says Nguyen. “What I love about Star Wars is that it’s science fiction but all of the technology is broken and worn. Everyone jumped on that idea after Star Wars, and we did the same thing (laughs). It makes technology more sympathetic. But making it slow and cumbersome was the easiest part — it actually was slow and cumbersome in real life! Basically, I just googled ‘coolest hexapods in the world’ (laughs) and one of the ones that popped up was in Portland, Oregon. I went down there with my production designer Manu Fréchette and we developed it with them. On the first day of the shoot, the robot crashed. We really panicked — in the middle of the desert! It didn’t love sand. The designer worked all night to get it up and running again but it was barely moving. It would move a tiny bit and then crash!”

Eye on Juliet isn’t exactly a satire or a comedy, but Nguyen does adopt a wry and slightly acerbic tone when exploring the perils of technology in the modern world. In the early going, it even adopts the beats of a rom-com! “It was one of the films I’ve done that was the biggest challenge in terms of pure cinematic language,” says Nguyen. “We had to work out a ton of details to create the illusion of proximity. For example, when we designed Gordon’s office in the control room, we realized we had to put the screen higher than his eye level in order for him to have the same eyeline as the hexapod. Once it’s established that the hexapod is talking, we no longer cut back to Gordon. He is the hexapod for the rest of the scene.

“I think setting constraints is what makes cinematic language interesting,” he continues, also mentioning how a significant portion of the film is told through the thermal cameras installed on the hexapod. “It gives you an angle. It’s interesting that you bring up the thermal cameras because I have an anecdote about them. We’d done research on what kinds of thermal cameras were available on the market presently and we found one that was very good but that we couldn’t import to the set in Morocco because they considered it a weapon. So we had to get a slightly worse camera in order to be able to get it into the country. There are always things like that on set that you can’t anticipate. When we got to the airport in Ouarzazate, they somehow knew we had a thermal camera! Maybe they have sensors or something, but they knew immediately. Maybe they have informants — I have no idea!”

In a way, the challenge proves a necessity in a world where important things — world events, even — happen on computer screens and smartphones. “I can’t deal with people sending texts in movies,” laughs Nguyen. “I sort of set this dogma for myself that I would never show texts directly on screen in a movie! It’s very depressing — real life is becoming less and less cinematic. But I honestly don’t know if it can go much further than where it is now, besides everyone just walking into telephone poles because they’re not watching where they’re going. I have a feeling we’ll go back and find a balance. (…) My 14-year-old daughter had some friends over last Friday and I thought it was very beautiful that one of them just said, ‘All right, everyone put their phone on the table and don’t touch it!’ I’m beginning to feel like it could actually change for the better!” ■

Eye on Juliet opens in theatres on Friday, April 20. Watch the trailer here: