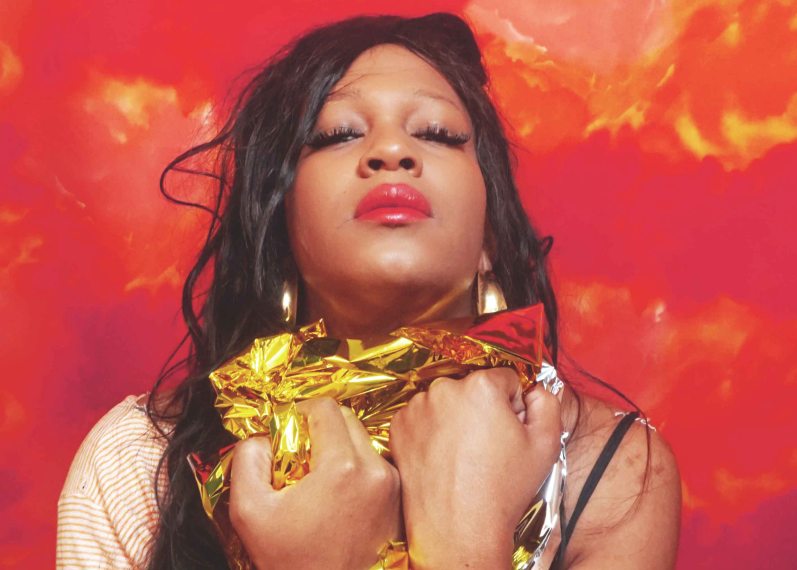 Barbara and her group’s upcoming shows at MAI, called Elle’s Black Space Mission: An Afrodiasporic Odyssey, promise to be unique in a few ways. First, Barbara is a musician making a move into performance art, so it’s a show not only with music, but interactive scenography, acting, pre-recorded parts, costumes and a giant spaceship. Second, it’s a show rooted in sci-fi. Third, the Black Space is a rarity not only for Montreal but elsewhere: a band made up entirely of black musicians.

“There are hardly any black bands anymore besides the Roots and a few others that are completely under the radar, and the model that record labels have been using to promote black artists since the ’70s is that of the solo artist. So what we do is pretty rare not only in but also outside the Montreal context,” says Barbara. “There aren’t many black bands around, and for that band to be led by a black trans woman, it’s different.”

In addition to frontwoman, Barbara serves as the ship captain in the story, which blends sci-fi with current day Montreal.

“I’m the leader of a crew of black space mission specialists,” she says. After a Malian doctor makes a discovery on Earth, Barbara and her team are sent into space to look for answers.

Barbara first dipped her toe into the world of performance art last year, shooting a live music video in front of a studio audience in collaboration with Wives, but otherwise it’s new turf for the longtime local musician, who previously recorded under the name Jef Barbara.

“I’ve been looking to migrate my practice into something that’s rather non-musical,” she says. “The anonymity of contemporary music isn’t the only reason, but there’s a bunch of motives over the years that have made me shift over to the art world.”

One of the reasons for moving into performance art? A general change in the concert-going experience.

“What I love so far about my personal experience in the art world is the economy is so vastly different than in music. In music there’s always a door deal situation where you get paid a few hundred. The art world is different because there’s more of a financial and time investment put into realizing a project,” she says.

“The music scene can be annoying. It’s filled with drunk, talkative people. Crucial elements of social interaction have migrated into the concert space, where instead of going to nightclubs to pick up, people go to shows to talk it out and drink beers, and they don’t really pay attention to the music. Out of all the shows I’ve been to, there’s a lot of chattering. And I don’t just mean my shows. I feel like the music space has been violated. It’s lost a bit of its importance in the eyes of the average concert-goer.”

Barbara’s upcoming shows also beg the question of future recorded material with Black Space. She says there’s lots in the pipeline: a new album, EP and single are in the works, and they could come out later this year or early next, although they won’t be rushed and Barbara isn’t afraid of “falling out of relevance.”

“(The new music) won’t sound entirely different – it will be similar in spirit,” Barbara explains. “It’s still an extension of me. I like to call it soulful pop with elements of glam, which has always been in my music. Synths are still the main foundational element of the songs. Come to think of it, there’s more jazz and prog, too.”

For now, fans can get a taste at the MAI shows. Putting them together has been a reinvigorating experience for Barbara, who is revelling in this sci-fi journey outside of the ordinary.

“I can’t overstate it. It’s going to be next level,” she says. “To me it’s a band unlike any other band. I don’t even like using the word band because it brings you back to indie rock from a Montreal perspective. It’s a group that is quite unique for Montreal, putting on a show that is unique in the context of the recent music scene here. It encompasses different art forms and we’re trying to not make a boring ass indie show.” ■