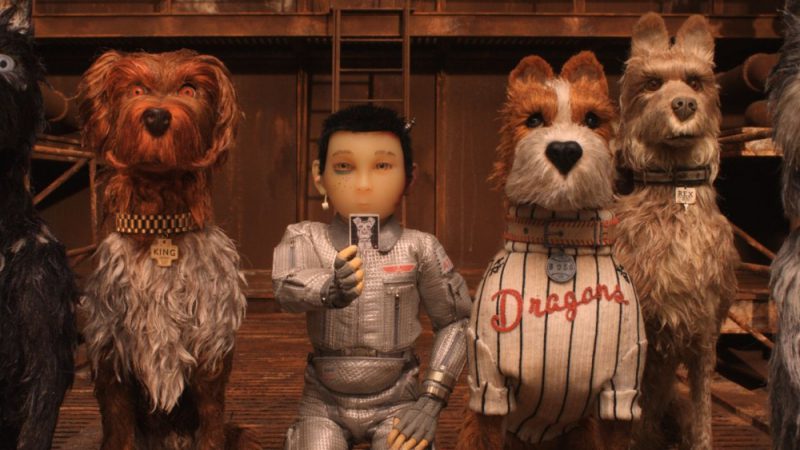 Let’s get this out of the way first: Wes Anderson is white and he has made a movie set in Japan. It is not, in the grand scope of things, a movie about being Japanese. It isn’t even a story that necessarily needs to be set in Japan, though it would be a very different film if it weren’t. It would be easy to accuse Anderson of fetishistic orientalism and to claim that he’s telling a story he has no business telling – I won’t be the one doing that, partially because it’s not my place to do so (a debate currently rages on Twitter about whether this film is just racist or very racist; I will direct you to Twitter dot com for those kinds of hot takes) and partially because I think that Isle of Dogs isn’t about Japanese society so much as it is about Anderson’s love and reverence for Japanese film.

That comes real close to being the same thing, but Isle of Dogs feels like a pretty harmonious marriage of Anderson’s dollhouse visual style and the stylization of classic Japanese cinema. Anderson’s films have always felt precious and carefully calibrated; working with stop-motion for the second time (after The Fantastic Mr. Fox) allows Anderson to fully build the dingily futuristic steampunk world of Megasaki with full, obsessive control. With direct nods to Kurosawa as well as anime classics, Isle of Dogs sees Anderson unleash the barely concealed film nerd at his core while remaining unmistakably, idiosyncratically Wes Anderson-y.

A centuries-old feud between two warring clans has split Japan in half between dog people and cat people. The mayor of Megasaki, Kobayashi (voiced by Kunichi Nomura), happens to be a cat person, so he uses his power to banish all dogs to an island of floating garbage off the coast of Japan. (It must be said that all the dogs have a sort of permanent canine flu that was given to them by the government, which makes the decision “easier.”) Chief (voiced by Bryan Cranston) is the de facto leader of a pack of dogs that live on the island; scrappy and aggressive, Chief is the only dog within the pack to have been a stray back in Megasaki.

The rest of his crew (voiced by Edward Norton, Bob Balaban, Bill Murray and Jeff Goldblum) are a little more docile and used to a life of comfort, which they reluctantly give up any hope of ever reattaining when a young man they called the Little Pilot crashlands onto the garbage island. The Little Pilot is Atari (Koyu Rankin), Mayor Kobayashi’s ward. He has come to the garbage island to find his dog Spots (voiced by Liev Schreiber), who Kobayashi symbolically sent off as the first dog exiled to the island. Chief and his pals agree to help Atari find his friend, even if the dangers of finding someone who perhaps doesn’t want to be found are huge.

Anderson employs a mix of stop-motion and traditional animation (whenever characters are looking at a screen, that footage is animated) that’s even more distinctive and free-ranging than the style he developed with his previous “family” film, The Fantastic Mr. Fox. Anderson seems to have had a whale of a time designing the visuals here, crafting a larger-than-life world that borrows from so many styles and sources that it’s impossible to categorize… but also impossible to truly consider original.

I’ve always enjoyed Anderson’s meticulous dollhouse approach to filmmaking, but in Isle of Dogs it threatens to topple the whole film. The world is so detailed and so deeply designed that I sometimes found myself focusing on background details rather than the actual plot. Isle of Dogs’ biggest flaw is really one of pacing – it simply lacks the momentum that should come naturally to this kind of story, and just sort of ambles along. You’d think the plot would just be an excuse to get lost in this crazy world that Anderson has concocted, but there’s altogether too much story for that, and it all gets so overly complicated with twisting strands of plot that the film seems to limp to an ending rather than get there triumphantly.

Isle of Dogs is also Anderson’s least funny-ha-ha film, though there’s plenty of his droll wit and incongruous outbursts to please fans. In fact, I’d argue that this is Anderson’s most flawed film but also one of his more ambitious ones. (Maybe ambition and risk are one and the same, in this particular case.) The core of Isle of Dogs comes from a very real place and, like pretty much all of Anderson’s films, the heavily mannered style isn’t necessarily conducive to all of its ideas. There’s a lot to love in Isle of Dogs, even if its central idea is perhaps not the most well thought-out in the world, even if the character voiced by Greta Gerwig doesn’t fully jibe with the rest of the film and even if the dénoument happens in such a lackadaisical fashion that I almost didn’t notice the movie was over. ■

Isle of Dogs opens in theatres on Wednesday, March 28. Watch the trailer here: