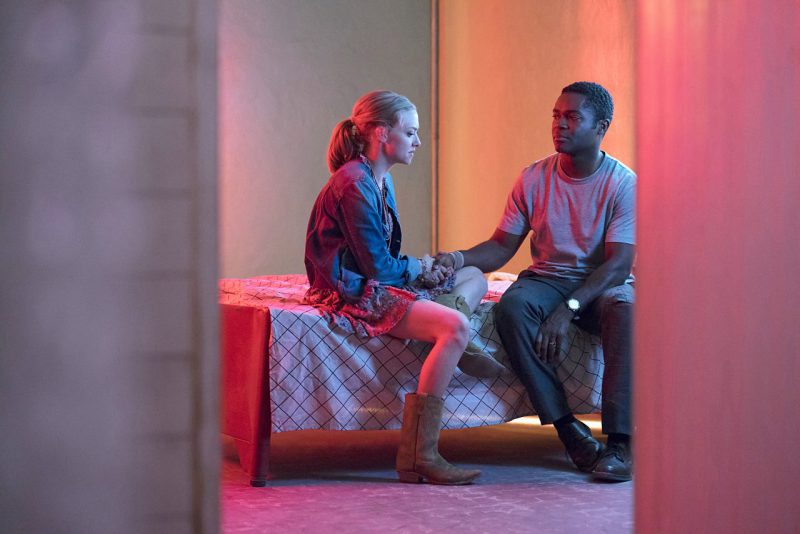 There’s a whole lot of talent assembled in this 2002-styled comic crime caper, to the point where it could feel like director Nash Edgerton has some really choice blackmail material with which to manipulate his stacked cast. It’s really not that complicated, though (or at least it doesn’t need to be): this is just stuff that these actors probably don’t get offered too often, and they’re having a lot of fun. As these things tend to pan out, they’re having way more fun than the audience.

Harold Soyinka works in middle management at a pharmaceutical company co-run by his seemingly only friend, blowhard bro Rich Rusk (Joel Edgerton). Financially crushed by his wife Bonnie (Thandie Newton), Harold fears losing his job if the rumours of a merger ever wind up being true. Accompanied by Rich and the company’s ice-bitch co-president (Charlize Theron) on a frequent trip to Mexico, Harold learns that not only is his job almost certainly gone, his wife is also cheating on him. Despondent, Harold pays off a couple of hotel clerks to pretend to kidnap him in order to collect some ransom money and start his life over again. Little does he know that the pharmaceutical company with whom he works has deep ties with a Mexican cartel boss – or that his boss/best friend might be better off with him dead… or that he’s hired a mercenary (Sharlto Copley) to handle the situation.

Unsurprisingly, Gringo draws heavily on the Elmore Leonard formula of crime comedy: crudely defined baddies with trenchant one-liners, comic violence that dips into the grotesque, double switches, triple switches, a doe-eyed innocent (Amanda Seyfried) who somehow gets wrapped up into the whole mess and a sympathetic — though not entirely innocent — protagonist at the centre of it all. It’s the kind of movie that skews towards the comedic without actually being all that funny; there are no comedic setpieces to speak of, but the villains are clearly drawn as comedic archetypes (Edgerton and Theron watch themselves fuck in the mirror, to give you an idea), which in turn lightens the mood a little even when guys are getting their toes cut off and/or shot in the head for their controversial opinions on the Beatles. (That the film’s recurring pop-cultural in-joke revolves around the world’s most famous and beloved band says a lot about the level at which Gringo is operating.)

It’s nothing you haven’t seen before, but what makes Gringo palatable and even entertaining is Oyelowo’s performance as Harold. The central performance in a criss-crossing crime caper like this one is the most difficult one to pull off, since the hapless patsy is often relegated to playing straight against actors blowing off some steam in showier roles. Harold could’ve been pathetic or he could’ve been an unlikeable anti-hero, but Oyelowo’s performance is more finely tuned and less one-note than you perhaps would expect from a movie set in Mexico that inevitably ends in a Mexican standoff. (The movie seems to think this is, at the very least, mildly clever.) Instead of the kind of dope you enjoy seeing bad things happen to, Oyelowo crafts a full character, a Nigerian immigrant whose faith in others remains unshaken far longer than it has any need to be. Harold could be the perfect role for an otherwise serious actor to let off some steam and go ham, but Oyelowo grounds a movie that otherwise feels so wispy, it’s airborne from minute one.

Gringo’s screenwriter, Matthew Stone, has some background in the genre; his breakout script was Destiny Turns on the Radio, now remembered as the first movie that pointed to the fact that perhaps Quentin Tarantino was a talent in his own right and simply riding his coattails was not going to be enough. (Stone gets a co-writing credit alongside Anthony Tambakis, who is currently attached to no less than the upcoming Bad Boys, Karate Kid and Suicide Squad sequels.) Gringo is better than that, but there’s a workmanlike anonymity to the whole thing that never really gets off the ground. Aside from Oyelowo’s performance, nothing in Gringo feels remotely lived-in. Even the promise of watching actors like Theron and Edgerton blow off some steam never really pays off. They certainly looked like they had fun, though. Someone has to. ■