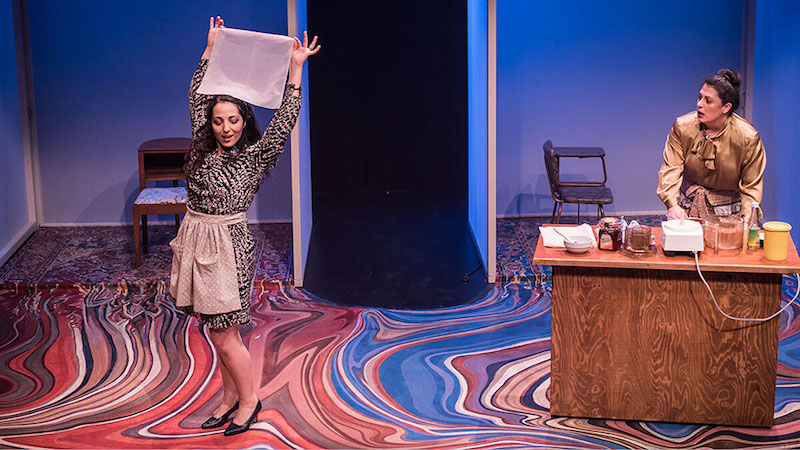 This phrase repeats throughout Centaur Theatre’s The Baklawa Recipe, a new play from Lebanese-Canadian writer Pascale Rafie. The play is set in 1960s Montreal and chronicles the lives of two Lebanese women, Nadia (Christina Tannous) and Rita (Natalie Tannous), who immigrate to Canada. Marrying brothers, they become sisters-in-law, but more than that, they’re each other’s confidants and caregivers, a support system at the other end of the phone. Baklawa will feel both familiar and novel to any Montrealer, a play that references landmark streets and stores while introducing new and essential voices to the telling of this city’s history.

Directed by Emma Tibaldo, the play is best understood as a series of phone calls and cooking lessons that add up to two rich and fraught lives. Much of the action in Baklawa is simply Rita and Nadia on the phone, calling each other and their mothers back home to talk through their experiences of immigrant life. We feel Rita’s joy as she tells her mom about her husband’s booming business and the sparkling chandelier in their new apartment. We watch Nadia’s soul begin to crumble as she tells Rita of the emptiness she feels living as a cooped up housewife; all she ever wanted was to sing.

As the years go by, both women struggle to achieve success in their new country while staying connected to their old one. Rita and Nadia have different ways of adapting and coping, their conversations turning into arguments and dropped calls. Timelines become blurred as their daughters, Naima and Fanny, begin to call each other in the present day, trying to reconcile the grudges and tragedies their mothers couldn’t. What starts as a story of two women supporting each other becomes a heart-wrenching exploration of the isolation and dislocation experienced by immigrant women.

It would be easy for Rita and Nadia to feel like tropes: Rita the jovial, materialistic mother, Nadia the tortured, tragic waif. But Rafie and Tibaldo have turned these archetypes into three-dimensional women whose struggles are clearly grounded in the social pressures they face. This nuance is expertly teased out by the Tannous sisters, both of whom turn in fantastic performances. Natalie Tannous in particular is a tour-de-force as Rita — she has the audience laughing one minute and crying the next.

Rita and Nadia’s alienation is cleverly reflected in Eo Sharp’s stark and simple set. Most of the play takes place inside four large white rectangular rooms placed side by side on the stage. These are telephone booths, to where the characters retreat to call one another — they make sure that even when Rita and Nadia reach each other on the phone, there are still walls between them. Nicolas Royer Artuso’s score, too, highlights the tenuous connections and disconnections these women have with one another, turning dial tones and busy signals into a haunting soundtrack for immigrant lives.

This strategy of telling a story by having your characters, well, tell each other stories is one that mostly pays off. It allows us to hear Rita and Nadia’s experiences in their own words, letting us understand their lives from their perspectives. Yet staging so little of the actual action of the play can make things a little too alienating. The women hardly ever get to interact with each other on stage – which is a shame, because it’s magnetic when they do.

The Baklawa Recipe is almost too successful at conveying how Rita and Nadia feel, forgetting to sharpen the rest of the world around them. Naima and Fanny aren’t nearly fleshed out enough, serving mostly to illustrate that Rita and Nadia’s stories have lingering repercussions, while everyone else in these women’s lives —btheir husbands, the oppressive auntie and the gossiping housewives who bad-mouth Rita and Nadia — is either caricature or ghost.

On the other hand, it’s refreshing to see a play focused so exclusively on the hearts and voices of two immigrant women. The Baklawa Recipe premieres at a time when women and immigrants across North America have to fight hard to make themselves heard. The play is an insightful meditation on the ways in which social forces necessitate and disintegrate connections between women. It’s an alternate narrative to the Quebec history taught in school, where the ’60s usually mean the Quiet Revolution, second wave feminism and counter-cultural liberation. And it’s a warm reminder to all audiences to call our mothers, to listen to their stories and write down any recipes they have to share. ■

14,403 cases of COVID-19 / Coronavirus have been reported across Canada according to the Public Health Agency of Canada.

7,944 cases of COVID-19 have been reported across the province according to Santé Quebéc.