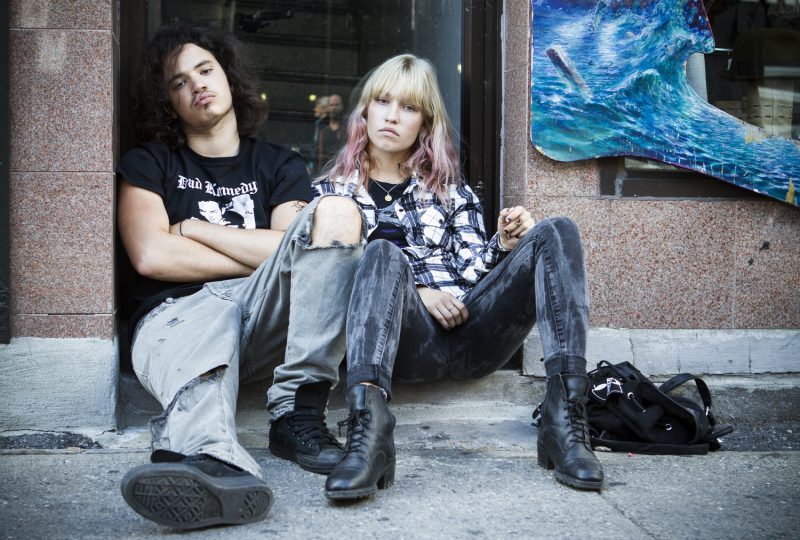 The tagline for Pascal Plante’s Les faux tatouages sets the tone: Fuck les films romantiques (fuck romantic movies). Plante and his stars admit the tagline perhaps exaggerates the film’s content, but it nevertheless lays the groundwork for a film that exists outside the realm of your typical rom-com.

“The ‘fuck les films romantiques’ branding is a bit clickbait-y,” says star Anthony Therrien. “It is still, you know, a little bit romantic.”

Théo (Anthony Therrien) meets Mag (Rose-Marie Perreault) outside of a metal show on his 18th birthday. Not particularly talkative and tormented by some mysterious demons of his past, Théo nevertheless opens up to Mag and they begin a tentative romance. She’s slightly older, more confident and experienced, all of which takes Théo out of his shell. There is one problem: at the end of the summer, Théo is moving halfway across the province to live with his sister.

The film is tinted with a certain type of nostalgia: for that period of time in one’s life, for summer, for the first pangs of love, for the music that surrounded us when we felt those pangs. I point out that the musical references in the film (Against Me!, Cancer Bats, Propagandhi) are more attuned to a decade ago — right around the time that Plante (and I) were the age of the protagonists.

“I think sometimes people are nostalgic for a period they didn’t really live through, and I think it might even be true of people your age,” says Plante, gesturing to the film’s two stars. (Therrien is 20, Perreault is 22.) “We see a lot of fetishism for decades past, be it the ’80s or ’90s.”

“Or even before that,” says Therrien. “I love Pink Floyd and the Beatles. A lot of my friends listen to the music their parents listened to when they were kids. If your parents listened to punk, that kind of music gives you nostalgia. It’s what you consider a classic.”

“I think that nostalgia is something that’s very much of our time, more than ever before,” continues Plante. “It’s like if you took away someone’s phone — it would be hard at first, but I feel like nostalgia would almost immediately kick in. There are so many facets of the way we live today that allow us to look back on the past and make us believe that the past was somehow different than it actually was. But, yes, I’m totally aware of the nostalgic angle of the film. The film tested with lots of audiences, and I’m glad to hear that people our age and people closer to the age of the characters can still relate to it.”

Plante made sure to cast age appropriate actors in the roles and make a film that shies away from the after-school-special, Watatatow depiction of teenagers. That requires a certain removal from the events of the film — a film about 18-year-olds is rarely written by 18-year-olds.

“I think the way the characters are projected is a form of nostalgia, or certainly of your own past,” says Therrien to Plante. “The kind of insight you would get from having lived this situation — or perhaps a less romanticized version of this situation — helps us ground our characters. If I were to write a screenplay like this one tomorrow morning, I wouldn’t know where to start. I could write a movie about the way I was when I was 15 since I have a little bit of hindsight, but a movie about myself now? (laughs) I know what I like, but I just live the things I like. I can’t really look at myself objectively.”

Plante casts a rather deglamorized look at his characters’ lives, full of small moments, frank sex scenes and an eye for everyday poetry. Though these characters seem rough from the outside, they’re fundamentally sweet.

“Starting their relationship with a sex scene was interesting to me, because it’s really not the kind of thing you’ll see in an American Rom-Com 101 movie,” says Plante. “There’s a lot of idealized puritanism in romantic movies, for one, but the sex scene also has this kind of finality. I wanted to make a movie where the kiss they share in the morning is worth more to both of them than the night they spend together. I like the paradox that the small, awkward stuff resonates more.”

“It’s a lot more accurate to the kind of situation we live in,” says Perreault. “There’s a lot more weight placed on texting and receiving texts and so on than this idea of waiting to make loooove! (laughs)”

The scene where the characters meet, early on in the film, is likely to be the most talked-about scene in the film: it unfolds in one eight-and-a-half minute take. The scene (which was the one read in audition by both actors) captures the awkwardness of a first meeting with its natural beats, stilted small talk and trail-offs.

“My favourite part of any shoot is the moment when we shoot the scene we auditioned with,” says Perreault. “There’s something really fun about that energy, of knowing you’re about to bring that energy that got you the role.”

“I just like the idea of shooting a scene from the vantage point of where we’d be sitting if we were also there, having a beer with them,” says Plante. “If we’re sitting and chilling with them, spending time… the expression ‘spending time’ is crucial. I wanted to make a movie where we spend time with the characters and that’s why we grow to love them.”

“I think a mosh pit is a pretty good metaphor for what I wanted to do with the film,” he continues. “It looks pretty intense from the outside, but when someone falls down, they get picked up immediately. Everyone’s there for the music, and it’s pretty rare that someone jumps into a mosh pit just to fuck things up or to be violent. The film introduces Théo as a kind of rough character, but it doesn’t take long before Mag sort of breaks through and finds the real guy. I like that in movies: people that give themselves this facade but actually prove themselves to be different underneath.”

“The two of them might go to all these intense metal shows, but they also fall down laughing looking at llamas,” says Perreault. ■