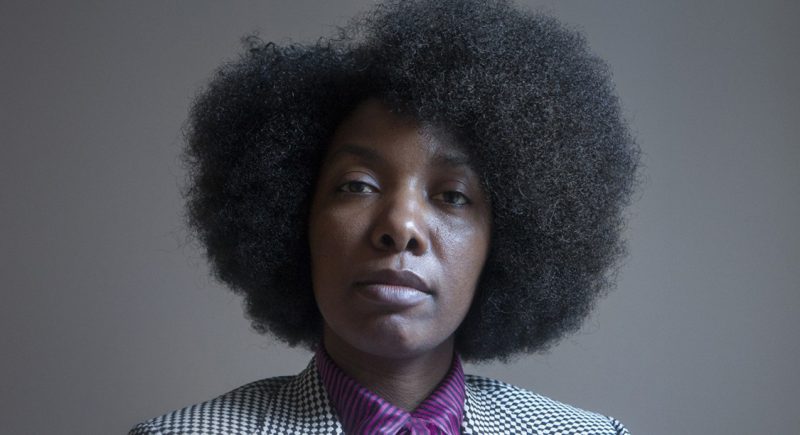 In Speak Up/Make Your Way,  a talking heads documentary that feels radical in its intimacy and cinematic in its framing, Amandine Gay reached out to friends and through social media in search of diverse experiences of being black in France and Belgium. Covering topics like religion, sexuality and education, Gay foregoes experts in favour of individual testimonies.

With the atmosphere of a conversation, the film is startling, funny and harrowing as it explores the obstacles facing black women in the French world. Made with a small crew and few resources, Gay made her very own dogma film, transforming constraint into opportunity. Gay’s film recently picked up the people’s choice award at the RIDM film festival in November.

Justine Smith: Why did you want to make this film?

Amandine Gay: I don’t see enough women like me on screen or portrayed in a way that is also dignified. Usually, in France or Belgium there are two types of characters for black women: either you are from the ghetto or you have catastrophic migration. So, to me, it was like there’s way more to black women, and what’s happening with their stories? Why don’t I get to see black students? Love stories that portray black women? Basically, everyday life.

I used to be an actress, which is what got me started writing. I first started writing fiction, thinking that maybe I could change the narrative. One of our scripts that had the most attention and was in development was a show that was a satire about a group of five women reading and comparing their lives to women’s magazines. In this group, I had a character who was a black lesbian sommelier, and every time I would discuss this character with producers, producers in France would be like, “It’s too American, these women don’t exist in France.”

It was derivative of me! I identify as pansexual. I’m a major wine buff. I’m having this conversation with white males who are telling me that I don’t exist. The documentary was a solution because that’s what I could do on my own. You’ve seen the credits, it’s like three names!

So, let’s make this film, let’s portray black women the way I want to have them portrayed. Let’s not have experts, because usually in documentaries about any minority, you are going to have them talking about their experience, then an expert — usually white — to make it sound legitimate. Black women are experts on their own lives.

Usually, those of us who get to make it in the industry are lighter skin, with hair that is not so kinky. A lot of the women in the film are dark-skinned because to me it was important to portray a political beauty. It was very important to make an empowering film for black women who will come and see the film, especially younger black women. The people I’m addressing with the film are younger me. All the things I wish I heard when I was 14.

JS: You are talking about representation but the struggle lies behind the screen as well.

AG: The issue is really the industry. There has been nothing done in France or Belgium. Nothing is done to make sure there are more people of colour or people with disabilities in film schools. Often we have this discussion because every female black filmmaker I’m obsessed with like Ava DuVernay and Dee Rees are American. When I am doing Q&As in France and Belgium there are younger black people who are like, “Why don’t we have our Oprah?”

Those women, for instance, are able to build on years of black people in the industry. It doesn’t start with Ava or Oprah, it starts with Mario Van Peebles. They’ve had 40 years of black artists in the industry. People like Danny Glover have been huge patrons. There are a lot of people in sports who have been giving money to cinema. When Spike Lee couldn’t finish Malcolm X, he got money from the industry, which means there were enough black people making a good living in the cinema industry in the States so that they could give back.

So then, in the 2000s you get a group of women and even queer women of colour like Dee Rees, who then get to make their film and get to have their voice and get to employ crews that are mixed. I’m pretty sure, if I wanted to have a crew that Spike Lee or Dee Rees or Ava Du Vernay, which are mixed in terms of gender and mixed racially — well Spike Lee just does racially, women they do gender (laughs) — I’m not sure I could find the crew. Not because black people are less talented, it’s because they haven’t been to schools, they haven’t gotten the right internships, they haven’t gotten the right experiences.

Every now and then, someone like me can take four years and 40,000 euros to make the film and take it to theatres. Now we are making it back, but we weren’t sure it would. Not everybody is going to do it, and not everyone can do that. So it takes privileged black people to be able to put a movie out there and do it.

JS: The way you shoot the women in the film, they are talking heads but in an extreme close-up. What was the particular reason for shooting the film in that way?

AG: Talking heads documentaries have a bad reputation for being un-cinematic and it is partially due to the fact that TV really ruined the genre. I wanted to have the concept of the film as a big conversation, but how do we make it visually interesting? One of the ways is to stick to the point, so when they are talking, there is nothing going on outside of them speaking. In the cinema, people are trapped — they can leave, but they won’t usually — so I’m just going to give you an empathy stimulus.

Another thing that is useful with the extreme close-up, is that you don’t have to cheat with the movement. We used an extreme close-up with a handheld camera, it was a black magic pocket with photographic lenses. What’s beautiful about that, when you are so close, is that it gets a little blurry when people move so you have to take the focus back in. You have movement, but it is organic.

I have to say that what I said about black skin and kinky hair — you don’t want to see us and you don’t want to hear us, so you are going to get two hours up in your face. It’s natural light, too, because I used to be told as an actress that one of the reasons they would not hire us is because it is harder to light black people’s skin. So we are going to make a movie with no artificial light so that this conversation can be over once and for all! We used low angle shots, so they have this regal look, which was important to me in terms of dignity.

JS: The film is focused on the experiences in France and Belgium — is there a major difference if you were to make the film in Quebec?

AG: First, if I’m the one doing it in Quebec then it is from an outsider’s point of view so it wouldn’t have been as interesting. When I’ve screened the film in Quebec I am try to get afro-Quebec women to comment. Some of the things that are universal as far as the experience as a minority is concerned are the issues linked to our representation, beauty, hair, sexual fetishization.

Then the differences are more on the political issues. For instance, all these issues in France about communatirism, saying that people have to mix, doesn’t exist in North America. We are told, “you are self-segregating.” In France, there is one way of life, which is the French way, and the French way means secular. When you are coming you have to integrate and you have to dissolve into that. If you refuse, you do not want to join the nation.

Then you have common political issues, like school discrimination. It is a huge topic in Quebec but then some other issues cannot be the same. In France, we are currently in an era where you are supposed to be decomplexed as a racist, which is the total opposite because here it is more polite. If you are French and you arrive here, you’re like “This is a quiet society, people don’t insult you to your face”. But a lot of my afro-Québécois friends are like, “I prefer telling it straight to my face rather than pretending and then still be racist.” ■

Speak Up / Make Your Way opens in theatres on Friday, Feb. 9.