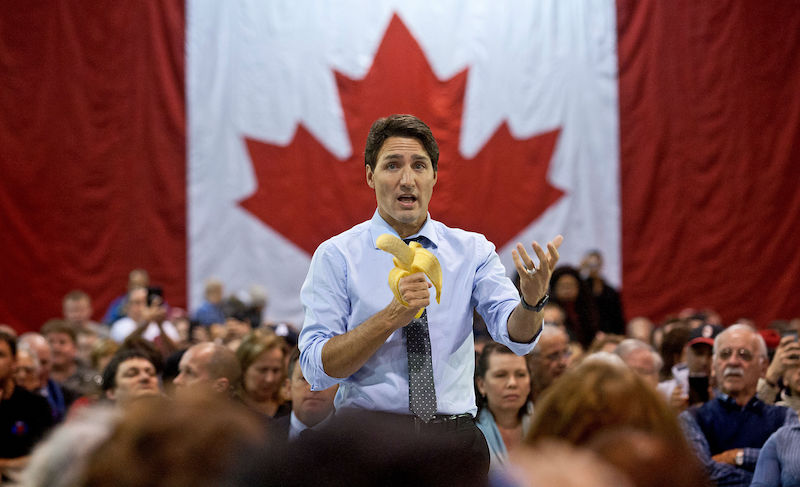 Quebec City, QC– On the fourth stop of his month-long town hall tour across the nation, Canadian Prime Minister Justin Trudeau was faced with tough questions from Quebecers on topics such as immigration, jobs and the Phoenix pay system, all of which he absorbed in virtual silence while coquettishly enjoying a sweet, ripe banana.

The 90-minute public question and answer session began with a number of attendees raising concerns around intolerance, racism and the threat of far-right groups. When asked about how to improve the integration of immigrants into Canadian society, Trudeau thanked the woman for her question, rolled up his shirtsleeves and plucked an organic banana from his Hermès messenger bag. After several moments it became clear the prime minister’s answer was soft, unbroken eye contact with the woman, which continued until the microphone was passed to another speaker.

Trudeau’s next challenge was the oft-debated question of whether he would consider reopening the constitution. As a local high school teacher launched into his query about senate reform, the prime minister interrupted by holding a single finger to the man’s lips, gently cocking his head to the side and peeling the first quadrant of banana skin in a single smooth motion.

“Next question,” he whispered.

The following portion of the evening saw Trudeau grilled about his recent flip-flopping on Canada’s marijuana legislation date, during which the prime minister expertly peeled the remaining three strips in quick succession, whispering “bam” after each one. The interaction was cut short when a heckler wielding a swastika-laden Canadian flag began yelling at the leader, at which point Trudeau brought the naked fruit to his mouth, murmuring “Godspeed, lost boy” as the man was removed from the premises.

A second tense moment in the discussion came when Trudeau was questioned about Ethics Commissioner Mary Dawson’s recent finding that Trudeau had violated conflict of interest laws when he and his family visited the Aga Khan’s private island in 2016. The confrontation came in the form of an individual in the audience who asked the prime minister point blank if he thought he was “above the law.” As the crowd became hushed in anticipation of his response, Trudeau, visibly emotional, rested his hand on his heart for several moments before gingerly reaching into his breast pocket, retrieving the banana peel, swinging it in a helicopter motion over his head and tossing it into the crowd. The individual appeared to repeat the question but ultimately could not be heard over the chants of “CANADA, CANADA”.

When the cheers eventually faded, Trudeau was faced with a smattering of questions about election reform, Finance Minister Bill Morneau’s ethical ambiguity and the prime minister’s failed trade talks in China, during which he effortlessly swallowed three quarters of the banana whole.

As the night drew to a close, Trudeau was approached by a university student who asked whether the Liberal government’s blacklisting of pro-life organizations from a federal summer jobs program earlier this year amounted to an infringement on religious rights. As he scanned the crowd with a stoic gaze, it appeared the prime minister was going to launch into an impassioned speech, but when he opened his mouth it was for the sole purpose of taking a large, purposeful bite of tropical fruit.

After one last look into the crowd, the leader proceeded to turn on his heel, collect his messenger bag and head for the door, turning his head just as he reached the exit to deliver a final message to the people of Quebec. The entire audience swivelled in their seats, craning to hear his parting words.

“Her body,” said Trudeau through a mouthful of banana, “her choice.” ■