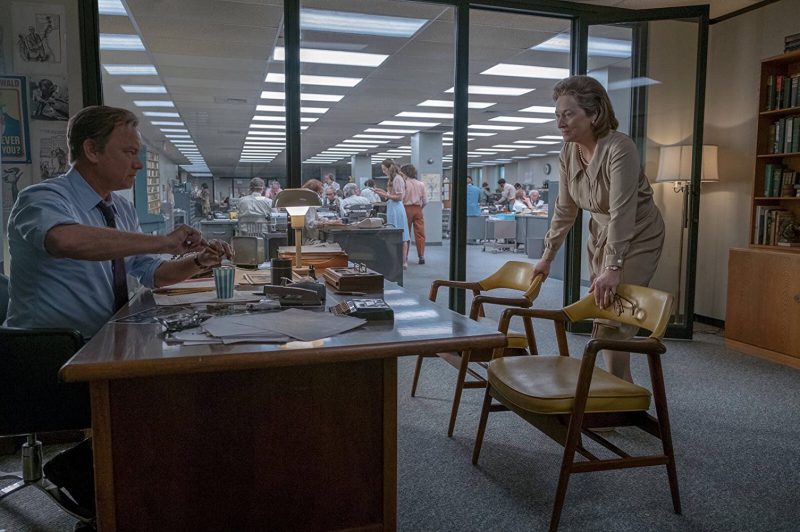 As journalism goes through possibly the biggest crisis the profession has had to face since its inception, it’s become increasingly clear that the public’s perception of what a journalist looks like and what a journalist does is very much defined by the movies. It’s not just the old-timey image of a fast-talking journo with a MEDIA pass stuck in his fedora; it’s the idea that people are apparently much more trusting of journalists and of the work that they do if they’re portrayed by A-list movie stars in a fast-paced, flashy drama. Hindsight is always 20/20, of course, but I find it bizarre that the main term that has been bandied about when speaking about Steven Spielberg’s The Post is that it’s timely.

The Post in fact strikes me as exactly the opposite – a nostalgic look at all the things we’ve lost, for good or bad. That the Pentagon Papers have added relevance in the era of Trump is certainly not lost on me (nor on Spielberg, who fast-tracked the film while doing the extensive post-production for his upcoming effects-heavy Ready Player One), but The Post doesn’t strike me as a film about then to talk about now.

Meryl Streep stars as Kay Graham, who has become the first-ever female newspaper publisher after the death of her husband. Having just taken The Washington Post public, Graham finds herself in an uncomfortable position towards shareholders who doubt her capacity to steer such an operation. Things are further complicated when Graham and the Post’s editor Ben Bradlee (Tom Hanks) learn of the existence of the Pentagon Papers, an enormous cache of confidential documents that have been stolen by a military analyst named Daniel Ellsberg (Matthew Rhys). The papers prove in no unspoken terms that the government has known the Vietnam War to be unwinnable essentially from its first weeks. When parts of the Papers are published by The New York Times, Nixon and his administration put the kibosh on further publication in the name of “national security.” But Graham and Bradlee have the capacity to release more of the papers – even if it means putting themselves (and the investors) in dubious legal situations.

The political thrillers of the ’70s were born from exactly this climate, so it’s not surprising that Spielberg apes their style here. It functions as both a historical and literal prequel to All the President’s Men, with drab colours, wide ties (and wider lapels) and the general malaise that seemingly existed when everyone smoked indoors at all times. The vast majority of The Post’s drama is internal – workplace conversations and theoreticals – with the closest it ever comes to a thriller being a sequence in which Bob Odenkirk (as Post journalist Ben Bagdikian) drops a handful of quarters that would come in extremely handy to make an extremely important phone call. As you might expect, The Post has a lot in common with Spotlight – both are essentially workplace dramas, featuring guys who roll up their sleeves and lean on desks pensively while the objectively more narratively rich thing (which in this case is almost certainly Ellsberg’s theft of the documents, which is showcased in a swift but efficient sequence) happens elsewhere.

Graham is at the centre of The Post, a figure both relatable in her relative inexperience and somewhat removed in her privilege. Graham is depicted as both out of her element and incredibly resourceful in a situation where even being the highest of high society isn’t going to save you if what you do is considered treason. Even Hanks’s character (which, if you’re keeping track, is the same character Jason Robards won an Oscar for portraying in All the President’s Men) takes a backseat to her. Telling this story from Graham’s point-of-view proves to be The Post’s most interesting decision, abstracting some of the immediate drama for something thornier and less familiar to most audiences.

It still seems to me, however, that what Spielberg loves most about this material is a nostalgia for the analogue world and all of its limitations. His camera lingers on typewriters, on the massive Washington Post printing press, on ugly-ass pastel-coloured rotary phones and dirty phone booths. He devotes an entire sequence to a young man delivering a package and several sequences to journalists (which also include Carrie Coon and David Cross) poring over the hard copies of the Pentagon Papers, spread out all over Bradlee’s sitting room. It’s a movie that’s in love with the tangible and that, somehow, draws a line in the sand between the then and the now. The worth of a journalist is the same as it has always been; the work of a journalist, however, is not.

Nostalgia is a tricky business. It can be toxic even in small doses, and The Post does suffer from some excessive old-man touches. The score (by the never-subtle John Williams) can be overbearing at times, and the less said about the Nixon sequences (which unfold in silhouetted long-shots that someone accurately described as very similar to the George Steinbrenner sequences in Seinfeld), the better. It’s not surprising that The Post is a beefy, down-the-middle film; it’s exactly what it needed to be, even if that means some corny Spielbergian tropes.

The Post opens in theatres on Friday, Jan. 12. Watch the trailer here: