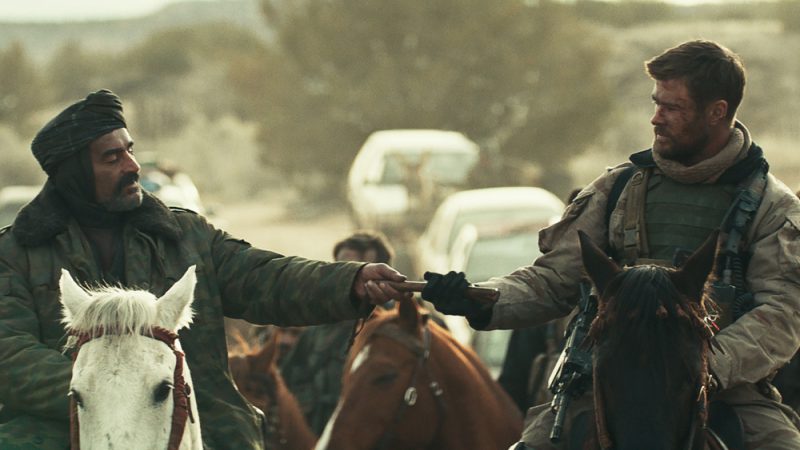 I distinctly remember that one of the ongoing narratives of 9/11 was how absurd it seemed, like something out of a Jerry Bruckheimer movie. It was one of the rare times I can remember where real life truly seemed to play out like an action movie, the horror of its events somehow catalysed by how fictional it all felt. I suppose it was only a matter of time before Bruckheimer tackled the events of 9/11 head-on in one of his projects. Rejoice, then, that 12 Strong isn’t explicitly about 9/11. It uses the events as a jumping point to tell a story of the Horse Soldiers, 12 Americans who led a covert mission deep in Afghanistan in order to stop the spread of the Taliban. 12 Strong is a post-9/11 movie, but make no mistake about it: it is a Jerry Bruckheimer movie that very explicitly uses the events of that day to kickstart an ooh-rah military action flick starring Thor.

It’s obvious from the very first minutes of 12 Strong that director Nicolai Fulsig (a Danish commercial director making his feature debut) and screenwriters Ted Tally and Peter Craig are not interested in dealing with subtlety. Inevitably, we meet the Horse Soldiers with their families, all of whom have hoped that they would never have to see their dads go off to war ever again. When 9/11 happens, Captain Mitch Nelson (Chris Hemsworth) renounces the desk job he had opted for to keep his family safe; Chief Warrant Officer Cal Spencer (Michael Shannon) rips up the retirement papers he just turned in. The country is at war, and they need to be a part of it.

What that means is that they head out (alongside fellow soldiers Michael Peña, Trevante Rhodes and some less defined beardos — though if you’re keeping track, they’re better defined beardos than the underdefined beardos in 13 Hours: The Secret Soldiers of Benghazi, 2016’s January’s ooh-rah military movie) to Afghanistan, where they team up with freedom fighter Abdul Rashim Dostum (Navid Negahban), who lost his family to the Taliban. Their goal is to stop the Taliban in their tracks before they move in on too much of the rugged Afghan landscape — a plan that is only possible on horseback.

Every time someone opens their mouth to deliver more than two consecutive lines of dialogue in 12 Strong, you can bet they’re about to lay forth a clunky aphorism or some corny shit about their family. In fact, the dialogue can easily be separated into two categories: military exposition that may or may not stick, or unbelievably cheesy dialogue that you’d find in a greeting card if military guys also wrote greeting cards as a sideline. The majority of 12 Strong’s flaws are concentrated in its screenplay, which contains so much wartime foreshadowing that it actually winds up only using about 60 per cent of it further down the line. It also keeps the stakes of what the Horse Soldiers are doing surprisingly vague; though there’s some context given by two superior officers played by William Fichtner (totally bald, for some reason) and Rob Riggle, most of the time the audience simply watches them go from point A to point B, launch some bombs and move on.

There’s, of course, a desire to honour the real-life Horse Soldiers that’s very palpable here, and I’m certainly not here to say that what they did is anything short of heroism. But 12 Strong’s screenplay walks on eggshells throughout to ensure that we, at no moment, ever forget that these guys are heroes, even if it means limiting their dialogue to anemic banter and making sure that they always keep their families in their heart and remind the other guys that they, too, have families that they love. The only time it sort of strays away from that is in the fleshing out Dostum — to the film’s credit, he gets much more of a character than films like this generally tend to give the “Middle Eastern guide.” Dostum even gets the film’s cathartic release moment over any of the top-billed stars, but it’s little comfort in the sea of tossed-off cheese. What’s lacking from 12 Strong is a sort of sense of grit that may animate these men. Instead, their heroism is smoothed out into one long tribute video in which all members of the Horse Soldiers basically share one personality and one sense of heroism.

Where 12 Strong almost makes up for the indifferent crustiness of its screenplay is in its action sequences. Fulsig has a surprising straight-forward approach to them, forgoing a lot of the chaotic hand-held action and heavily filtered nonsense typical of modern-day war films. Not once does he rely on slo-mo to really drive the point home, and the film works best when Fulsig brings control to chaos. The action scenes have a clarity to them that’s unfortunately somewhat offset by the film’s repetitive and somewhat indifferent storytelling.

Admittedly, there’s not too many ways 12 Strong actually could’ve gone. Down-the-middle, patriotic war films tend to do incredible box office numbers, and the fact that the Horse Soldiers are still alive and their exploits still fresh in people’s minds meant that 12 Strong was never going to be more than a surface-level celebration of unaggressive propaganda. An effects-heavy post-9/11 war movie starring the beefiest Australian money can buy was never going to get that critical or introspective. It’s more measured than you may expect it to be, but it’s also more dull. ■