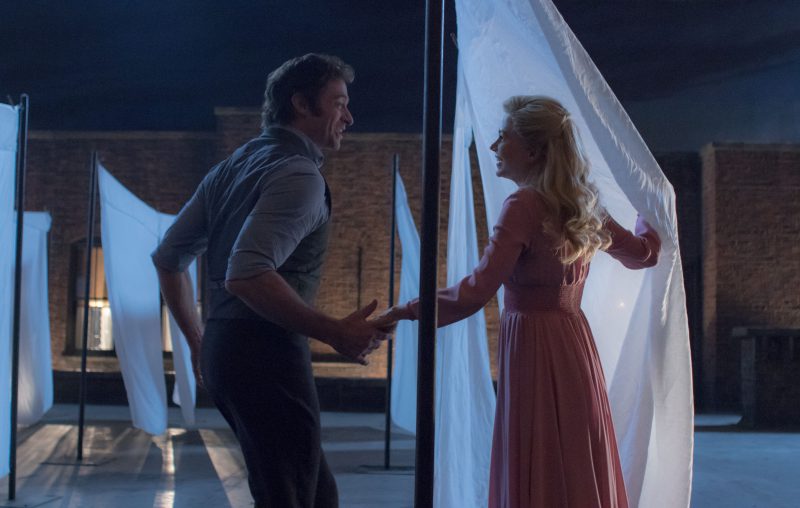 Hugh Jackman and Michelle Williams in The Greatest Showman

Musicals are corny. That’s just the way it is. Musicals have to be corny; corny is, in fact, the defining factor of any musical. It doesn’t have to be a negative thing, either. Few genres celebrate the pure artifice of cinema as blatantly as musicals – it’s a given that the fourth wall will be broken in some way, since you walk into a musical with the tacit understanding that, at some point, these people will break out into song. There’s no pretense to realism in a musical, which makes it both the last bastion of pure fantasy on-screen and the #1 pet peeve of those dudes who make YouTube videos about how movies aren’t realistic. (I don’t know what Neil deGrasse Tyson thinks of musicals, but based on previous history, it’s probably not great.)

I knew all of this when I sat down to watch The Greatest Showman, a musical adaptation of the life of circus magnate P.T. Barnum. I knew that five, ten, fifteen minutes into this movie, Hugh Jackman would break out into song. I knew it was only a matter of time and, yet, when it happened, my first thought was “Oh, this is happening?”.

It may be because in a genre awash with corn – one, in fact, that runs on corn – The Greatest Showman may well achieve an apex of corn. It is corn writ large, stacked ten stories high, stuffed in every crevice, nook and cranny. It’s a film so stupendously corny that it is the movie people think of when they say they love or hate musicals, even if they haven’t seen it. It’s a movie with a can-do, let’s-put-on-a-show attitude that’s literally about putting on a show and more or less devoid of complex characterization, of darkness and nuance. It is the most old-fashioned idea of a picture show – and I can’t tell whether I love that or hate that.

Phineas Barnum (Hugh Jackman) grows up in New York the son of a poor tailor. On an excursion with his father at a rich man’s home, he meets Charity, a young woman with whom he immediately becomes besotted. Lil’ Barnum becomes a man and comes back from Charity, whisking her away from her privileged upbringing and into a life of relative poverty as the wife of a corporate bean-counter. When Barnum loses his job, he decides to open an unsuccessful museum of curiosities that soon morphs into a circus / freakshow, featuring not only acrobats but a bearded lady, a dwarf dressed like Napoleon, a giant, conjoined twins, etc. Barnum ropes in respected high society man and theatre actor Phillip Carlyle as co-conspirator, and soon Barnum’s circus becomes a popular success – though one completely hated by the New York Herald’s pompous head critic (Paul Sparks) and often picketed by random ne’er-do-wells who disapprove of Barnum’s approach to entertainment.

Barnum’s real life is interesting in itself – a truly bizarre incarnation of the American dream, he pioneered many facets of entertainment (including out-of-control hype!)… but this isn’t really what The Greatest Showman is interested in exploring. Every possible edge of Barnum’s life is sanded off: he’s a loving father, a devoted husband, a super nice and cool dude to the so-called freaks he’s supposedly exploiting (though the notion of freak certainly has changed; one guy’s characteristic is that he’s covered in tattoos, which we call “being a chef” in 2017), a canny businessman and so on and such forth. He’s a more or less flawless man with a beatific wife (suffice to say that an actress of Williams’ calibre is wasted in a role that requires a heavy amount of smiling and staring at the horizon) whose entire purpose in life is to razzle-dazzle.

And, my friends: the razzle, it dazzles. The music in The Greatest Showman is mostly terrible: tapped-in, zeitgeist power-ballad pop of the most forgettable order. (Pretty much every song sounds like Katy Perry’s Fireworks – except for that one jaunty, four-on-the-floor number that recalls the old-timey, banjo-pluckin’ spirit of Mumford and his assorted adult sons.) The songs are so interchangeable that every time one threatens to burrow its catchy melody into your brain, it’s almost immediately erased by the next one. You’d think that a musical could not possibly be good at being a musical when its songs are bad; you would be (mostly) wrong.

That’s because director Michael Gracey actually has a pretty solid eye for staging the sequences in which these interchangeable Top 40-aping songs are performed. The Greatest Showman is Gracey’s first feature film, which should immediately set off warning bells; the percentage of relatively inexperienced directors who were handed something as big as this and totally fucked it up is somewhere along 100%. You’d expect The Greatest Showman to be an over-directed nightmare, and yet its musical numbers are often surprisingly electric. Everyone is shuffling around like they’re in the Thriller video, but when it works, The Greatest Showman proves to be surprisingly engaging – albeit in short bursts, broken up by blankly smiling A-list stars and circus elephants.

With plastic performances, a plot that’s streamlined into oblivion, a fairly weak plea for tolerance hidden somewhere between the layers of glitter and trapeze stunts and a disposable pop soundtrack that quite literally eats itself as the film moves on, The Greatest Showman has very little, concretely, to recommend it. What it does have in spades, however, is the aforementioned razzle and/or dazzle. The Greatest Showman comes at you with furious jazz hands and stomping and dares you to turn your nose up at such capital-c Corn. It’s a fairly convincing argument, but so much of it is going through the motions in the corniest, blandest way possible that it doesn’t really pull it off. Call it some razzle, insufficient dazzle. ■