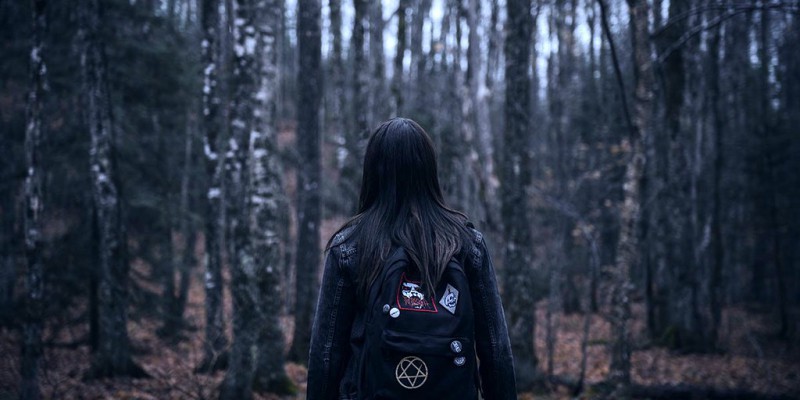 Montreal-born, Toronto-based filmmaker Adam Macdonald first rose to prominence as an actor; you might remember him as the obnoxious high school sweetheart in Being Erica. But for the last few years, Macdonald has been fully focused on his first love: horror films. After making his directorial debut with Backcountry in 2015, Macdonald returns with Pyewacket, an occult thriller that’s hitting theatres this week.

“In the first one, I was ambitious in a way,” says Macdonald. “There was a bear attack in it, and it was a challenge to work with a real bear. But with Backcountry as with this one, I knew that I may never get another chance to direct, so I had to set out to make Backcountry the best it could possibly be. I thought it would be a little easier on the second one, since I had a little confidence — no, it’s the same. I was feeling that heat for the second one, too, but it was also more pressure. Backcountry was well-received, it did well, and this one became like my second album. People want to see what you do with it, so you put that on yourself a little bit. You want it to be the movie you want to make. (…) It was a little different because I had more confidence — I had done it before, and I knew we could do it.”

Nicole Munoz stars as Leah, an angsty teenager who relocates to rural Ontario with her mother (Laurie Holden) after the death of her father. Leah isn’t particularly happy with any decision her mother makes, but taking her out to the middle of nowhere is just about the last straw. Leah starts looking into the occult and, in a fit of desperation, attempts to summon the demon Pyewacket to teach her mother a lesson. Surprisingly enough, the ritual works — but there’s no going back when it comes to summoning an ancient demon.

“The name is so strong,” says Macdonald when asked why he picked the familiar spirit Pyewacket out of all possibilities. “That’s number one. Number two, it’s a familiar spirit, right? It goes back into the folklore. If you go back to the Witchfinder General in 1644 or something, he found a coven of witches and in the list of names, you have Pyewacket. I’m sure the purists would see that I changed it like crazy, but I just thought that a spell of that name — the name is only spoken like three times in the movie — it really hits you. The whole trajectory of the movie started when I heard the name, because it’s so powerful. Pyewacket!

“I’m not into that kind of stuff in that I don’t practise it or anything,” he continues. “I find it terrifying in a way, because you don’t want it to be real. I did a lot of research. I read a lot of books on Wiccans, watched documentaries about black magic, a lot of Aleister Crowley stuff. I just wanted to make it as authentic and intimate as it could be. If it was real — if you could believe it was real — how would it manifest itself? How would it happen? Is it cloaks and hoods and things? No! What if it was really small and infected her and manipulated her? How would that look? That’s what I went for. What I found in some of the research I did was this idea that it works through you rather than to you. It’s manipulative and very confusing. In the movie, they say it’s like a river: the evil is just waiting for you on the other side.”

Macdonald’s experience as an actor also informs his work as a director, particularly as it pertains to his preferred genre. “I had the benefit of doing both, directing horror and being a victim of horror as an actor,” he says. “I did a movie called Home Sweet Home. Really cool director from France, actually, and it was a really good experience, but I got butchered in that movie! Chopped up and beat up and everything. It was a few days of that — you’re sticky, you’re full of blood, you’re screaming, you’re crying. It’s exhausting. It’s kind of like an elevator, you’re up, you’re down. Having been on the other side, I have the benefit of having had that experience, and I know not to push too hard. I know when to save the energy for the actors. We’re gonna get what we need a bit later, so they don’t need to burn themselves out. When we do have it and you know it’s exactly what you want, you have to move on.”

Nevertheless, Macdonald’s choice to make genre films isn’t simply a practical one — it’s a personal one. “I just love it!” he says. “It’s almost like heavy metal. You can’t just be, ‘Oh, I was into metal for a summer.’ Once you’re in it, you’re done. It becomes a part of your DNA, almost. My older brother and his friend showed me Evil Dead when I was so young — I was seven or eight, something like that — and I just went BOOM. It changed my life, probably because I was so young. It really, really laid the blueprint. The rush I felt from it… I thought, ‘I don’t know why I’m so into this (laughs).’ Anything else — Cheech and Chong comedies, action movies — they didn’t do much for me. I loved that feeling, and I wanted to give that feeling to somebody.” ■

Pyewacket is in theatres now. Watch the trailer here: