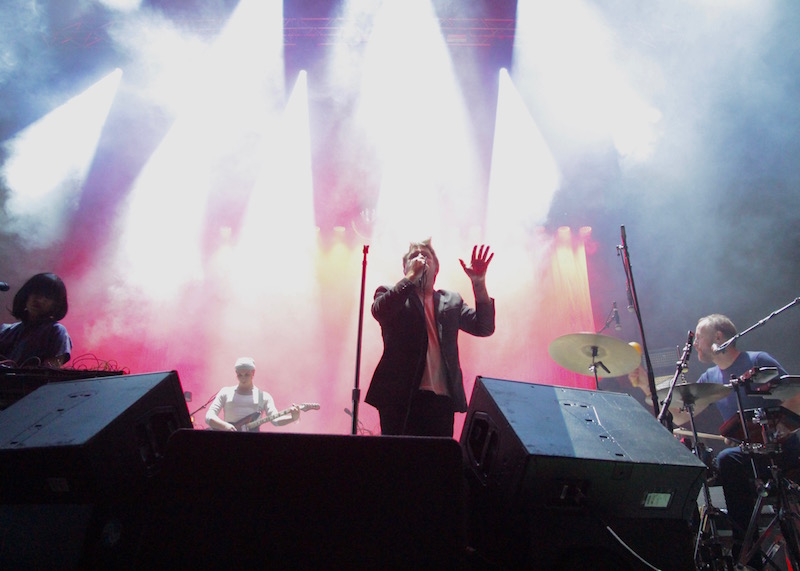 Though LCD Soundsystem is perhaps fighting through some skepticism and eye rolls in light of their short-lived disappearance following their monumental documentary, the group spawned by James Murphy — the man about to age out of the “scene” singing about Can and Daft Punk — has always danced on the edge of cool.

Their music is specially designed to sound good to everyone forever. Analogur synths and drum machines act as the seed of each tune, with climaxes found in punky group vocals and ensemble percussion. It’s fun and sugary but dense enough to head-bang to. Their stylistic references flatten time, sounding like an indie kid DJ set running the gamut of TRAX records house against New Order’s rock sensibilities with a Kanye sense of maximalism.

They set-list was equally post-modern, seemingly never sticking to the same album. Their self-titled album’s “Movement” disintegrated into Sound of Silver’s heartfelt “Someone Great.” New kid on the block “Call the Police” thrashed before “Get Innocuous!” barrelled like a freight-train. Perhaps some could find holes in the set (“North American Scum” comes to mind) but their performance ran just shy of two hours — not a moment too long or short.

Each member of the band is necessary. Nancy Whang showed steadfast keyboard presence on tunes like “Tribulations,” took a brief stint in the spotlight and offered constant backing vocals. Al Doyle’s feedback heavy guitar solo felt particularly primal, matched with continuously virtuosic performance from bassist Tyler Pope. The placement of drummer Pat Mahoney beside leader Murphy is strategic as the pair constantly push each other to pack more punch. As bands get richer and stages get bigger, certain touring outfits get a bit obtuse, but the Soundsystem certainly doesn’t carry unnecessary weight.

Maybe Murphy is some sort of marketing genius and maybe he’s trying too hard not to be corny — here’s his take on their not-so-encore: “When we leave we’re not pretending that’s the last song, we’re just taking a second to pee and we’re gonna come back. You don’t have to do that thing where you try and get us to come back” — but LCD Soundsystem still sounds fucking amazing. Ten years on, their humanist closer “All My Friends” has lost exactly none of its life-affirming sheen. ■