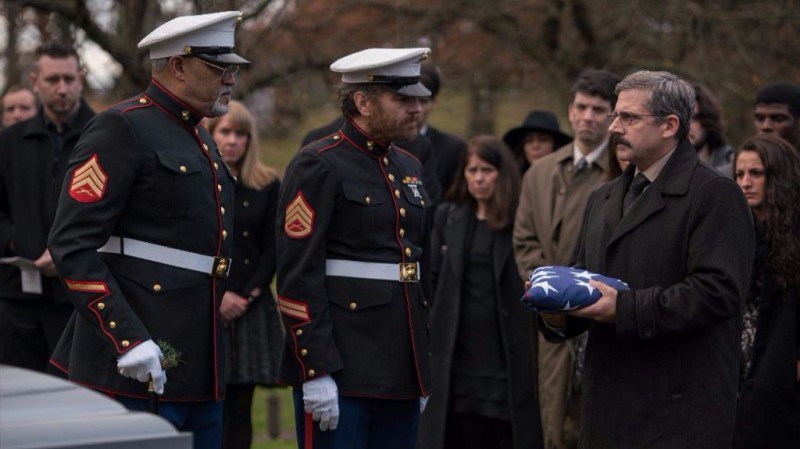 Richard Linklater’s Last Flag Flying is not exactly a sequel to Hal Ashby’s The Last Detail, though it could have been. Linklater is working from Daryl Ponicsan’s 2005 novel — that in itself was a direct sequel revisiting the lives of the same characters some 30 years on. The characters in Last Flag Flying are very explicitly meant to be separated from those played by Jack Nicholson, Otis Young and Randy Quaid in the 1974 film, and yet it’s extremely hard not to apply sequel principles when watching it. It’s been extremely unadvisable to try and sequel Jack Nicholson movies — off the top of my head it’s only been done once, Nicholson starred and directed, and it still kinda sucked (ie. The Two Jakes). It’s obvious that Linklater wants Last Flag Standing to stand alone (no pun intended), but he’s got a hell of a pair of boots to fill, whether he wants to or not.

Linklater’s best films work in textures. He’s narratively driven and relatively mainstream as a filmmaker, yet he’s one of the best at letting movies breathe. Perhaps what underwhelms me about his latest is its rigidity, even as it repurposes The Last Detail’s road trip structure. Bryan Cranston stars as Sal Nealon, a former Marine who now operates a rather shitty dive bar that he possibly also lives in. Sal is visited one night by Larry “Doc” Shepherd (Steve Carell), an old buddy from the service whom he hasn’t seen in 30 years. Larry still works for the Marines, but he’s come to his old friend with a different goal in mind: his only son was killed in Iraq, and he wants his old army buddy to accompany him to the funeral. Sal and Doc detour a little on the way to pick up their other army buddy Mueller (Laurence Fishburne), who has since turned his life around and become a minister. Together, they journey to pick up the body of Larry’s son and escort him to his final resting place.

Linklater and Ponicsan (who co-wrote the screenplay) keep the story set in 2003 because Last Flag Flying is very much about the disillusionment of a post-9/11, Bush-era America. As Ashby’s film looked back at the Vietnam war with a mixture of bruised patriotism and disillusionment, Last Flag Flying also takes a critical look at the place the States were 15 years ago. Some of it is genuinely affecting in the way these men, so far removed from their careers as Marines, still cannot shake the death of a fourth compatriot way back when. (The film’s best, most memorable scene comes when they decide to pay the man’s elderly mother, played by Cicely Tyson, a visit without really knowing why or what they can possibly achieve by doing so.)  Some of it is decidedly more silly — there’s a whole sequence dedicated to Sal deciding to purchase a cell phone and marvelling at its features, which subsequently becomes a fairly unfunny recurring joke.

That’s the push and pull that drove The Last Detail, too, but Last Flag Flying doesn’t flow nearly as easily as it should. Part of it is that the episodic nature of the film splits up so often that the notion of time passing becomes vague, and we feel less like we’re spending time with these characters and more like we’re peeking in once in awhile. Some of its individual scenes are great and truly moving — this is some of Carell’s most restrained and touching work ever — but Linklater and Ponicsan have a harder time getting the film to gel together as a whole. It’s incredibly moving when it deals with its central themes of grief, but less assured when it comes time to fill in the margins.

Last Flag Flying’s pacing and cohesion issues are given a tremendous boost by the three lead actors’ performances. It’s been hard to break Cranston out of his Walter White image, and truthfully there are a couple of scenes in here (mainly when Sal gets drunk and starts grandstanding) where he flies perilously close to the Nichol-sun. But when Cranston truly locks in, he gives a performance of great depth and melancholy that’s only matched by Carell’s own depths of despair. A quiet, sad-eyed introvert, his Doc has little trace of Carell the comedic performer lurking. Fishburne, for his part, has perhaps the showiest part as a man of the cloth who turned to God to whisk away his sinful days — but didn’t bury them very far down.

I’ve been a Linklater apologist — or fanboy, if you subscribe to the notion that he has absolutely nothing to apologize for — for a very long time. It’s only when Boyhood (a film that I admire but do not particularly feel strongly about) came out to some of the best reviews of his career that I realized that Linklater’s status as a journeyman director was perhaps one that I overstated. He works in varied genres, but his movies are always concerned to some level with a certain notion of philosophy and almost always leave space for loose hangs of some kind. Neither of those things are on in display in Last Flag Flying, making it perhaps the most conservative and buttoned-down of all his films.

It’s not something that Linklater seems particularly comfortable with, and although this is hardly a mainstream film, it’s a surprisingly down-the-middle one. In the end, it’s great performances and a handful of truly affecting scenes that make Last Flag Flying worth a look. ■