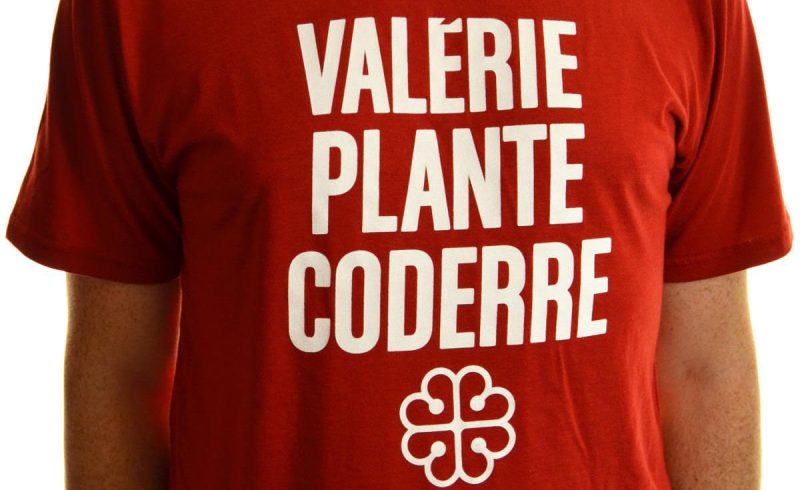 If you see that message on a t-shirt in the coming days, it is most definitely NOT a suggestion that the two main candidates for Montreal mayor should tie the knot. It’s a play on words that could well play out in the headlines next Monday morning, signalling an upset victory by Projet Montréal’s Valérie Plante over “maire sortant” Denis Coderre.

The affable PM candidate has managed to climb from virtual obscurity when she ran for the Projet leadership less than a year ago to nudge past “Kid Kodak” Coderre in the latest polls. Whether she’ll maintain that momentum and “plant” Coderre in Sunday’s vote, we’ll know soon enough.

But for the sake of a city that has become as lost as a commuter on a Montreal highway, let’s hope that voters recognize that Plante, as her campaign saucily suggested, is the “man for the job.”

Why? In part, because four years of Denis Coderre have demonstrated a city administration crippled by a lack of imagination. Its biggest accomplishment, getting Quebec to create an Inspector General’s Office to watch for potential corruption, has succeeded in exposing some of the rot at city hall. But as we learned this week from investigative journalists at La Presse and The Gazette, lucrative city engineering and infrastructure  contracts are still mostly in the hands of the same players who dominated the field before Coderre took office.

And in a file where the city could have stood out as an innovative and engaging metropolis with world-class universities and a non-stop flurry of cultural events, for the city’s 375th birthday party, the Coderre administration instead came up with disco bridge lights, granite tree stumps and an urban rodeo that fit the city’s image like a saddle on a salamander.

The bulk of Coderre’s promises in the current campaign either exhibit the same lack of imagination or recycle past promises. Indeed, much of what the mayor promises on issues like pedestrian and cyclist safety are in line with recommendations his administration has had on file or vowed to act on for years.

What should be a major asset for Coderre — continuity at city hall – is instead a harbinger of four more years of talk with little in the way of concrete action.

Coderre has called Projet Montréal’s Pink Line metro proposal an unrealistic pipe dream, but without such dreams, our current metro system would never have been built. While we pour billions of taxpayer dollars into rebuilding our collapsing road and bridge networks, the 69.2 kilometres of tunnels that we built over the past 50 years provide 1.25 million passenger trips every weekday.

Combined with the light train project to better connect West Island commuters to downtown, the Pink Line will help ensure that the use of private vehicles to get around will become a second choice of more and more Montrealers by adding 29 new stations to the existing 68-station network. This isn’t a fleeting spectacle — the Pink Line could be the beating heart of a modern and thriving metropolis, as integral as the “tunnel dreams” that have carried millions of Montrealers to home, school and work.

These are the kind of dreams that Montreal needs to shake itself out of a malaise of construction cones and kétaine spectacles like the $40-million light show on the Jacques-Cartier Bridge, a project that launched with excessive pomp — twice — and which now goes largely unremarked by citizen and visitor alike.

Or the Formula-E race, a potentially positive addition to the city’s attractions that was horribly planned and foisted on an unwilling sector of downtown in a fit of stubborn pique that has marked the Coderre reign. The project starkly revealed the mayor’s inability to recognize his errors, insisting it was a success even though we learned this week — despite Coderre’s best efforts to keep it under wraps — that of the 45,000 tickets for the event, 20,000 were given out for free.

Coderre wants another four years to prove what he can accomplish, but the past four years have been enough.

Valérie Plante has yet to be tested in the big chair, but she has shown herself to be someone who is able to both listen and lead. Watch her in a crowd and you’ll quickly see someone who relates to citizens as peers, not just potential votes. Even her adversaries will tell you that there’s no false façade with Plante — what you see is what you get, whether she’s knocking on doors or debating at city council. She is surrounded by a core of experienced and hard-working candidates united by a common platform and a collegial approach to governing the city that respects the diversity of its neighbourhoods while offering a unifying vision.

Coderre offers none of that. As the name of his party indicates, the Équipe Denis Coderre pour Montréal is built around a single man, and will begin to dissolve the moment he loses his bid for a second mandate.

A vote for Valérie Plante and PM candidates, on the other hand, will help expand the roots of a community-based party that has proven itself over 13 years.

Valérie Plante Coderre. Not just a dream, but a vision worth supporting at the ballot box on Nov. 5. ■