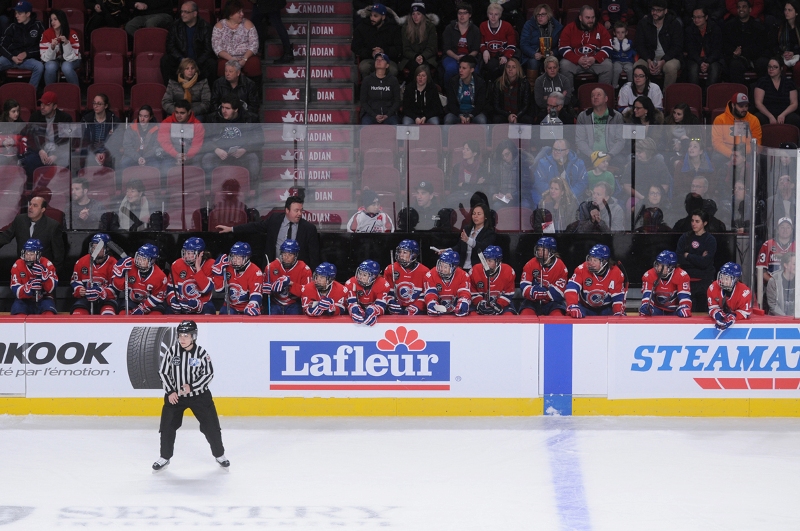 Win or lose, Montreal will always be a hockey town. Fans will forever don the red sweater and cheer when the home team scores and saves.

This year, the other Montreal hockey team is doing just that with a great start to the season. They should get everyone’s attention.

The defending Clarkson Cup champions les Canadiennes will be returning to the Bell Centre on Nov. 11 for a matinee game against the expansion Kunlun Red Star from China as part of a three-game super series — games two and three are played Sunday and Tuesday at Aréna Michel-Normandin in the Complex Claude Robillard.

It was almost a year ago that les Canadiennes made history by being the first women’s team to play a regular season game in an NHL arena. Les Canadiennes forward Katia Clement-Heydra, she hopes that Saturday’s game will be as exciting as last year.

“Last year it was probably one of the best experiences in my hockey career. The Habs are my team. I’m a huge fan. My dream as a little kid was to play for the Habs so to be able to play at the Bell Centre is always a dream come true and we’re all like kids at Christmas.”

When seeing the young fans, mainly young girls in the Bell Centre stands, Clement-Heydra describes seeing “these little kids that look up to us and want to be like us, and to see that we actually make a difference out there.”

Looking up at the Bell Centre’s Stanley Cup banners, given the history behind the team, just being in the stands at a home game is already a special feeling. For Clement-Heydra, while taking in the atmosphere of the game, she found something surprising in the crowd. “One of the fans with a poster with my name on it. I was surprised that little kids actually know who I am and yeah, that makes me a professional athlete. It’s unreal. It’s a great feeling.”

The Kunlun Red Star are one of two expansion teams from China that joined the CHWL this year; which adds to the excitement towards Saturday’s game “Right now, […] when it comes to the other team it’s pretty much the unknown. We are expecting them to be good however we’ve never played them before.”

Les Canadiennes will be travelling to China in late February to play the new teams. When the games were announced, there was more dealing with the unknown.

Clement-Heydra sees this as another exciting chapter in her hockey career. “It’s a pretty great opportunity to see another country and to get to play hockey.”

Since the last game at the Bell Centre, it has been an exciting time for Clement-Heydra and les Canadiennes. From scoring the opening goal in the 2017 Clarkson Cup final and winning the Clarkson Cup in a rematch against the Calgary Inferno to the recent announcement that the team will be moving to the Verdun Auditorium once the current renovations are completed — probably in 2019. The team is going in the right direction in defence of their Clarkson Cup title as they start the season undefeated.

It’s always a great experience watching les Canadiennes and women’s hockey. It’s an even greater experience if you can give them the support that they deserve. These players are part of a new tradition at the Bell Centre. If Montreal loves their hockey, Saturday afternoon should be quite a great time. ■