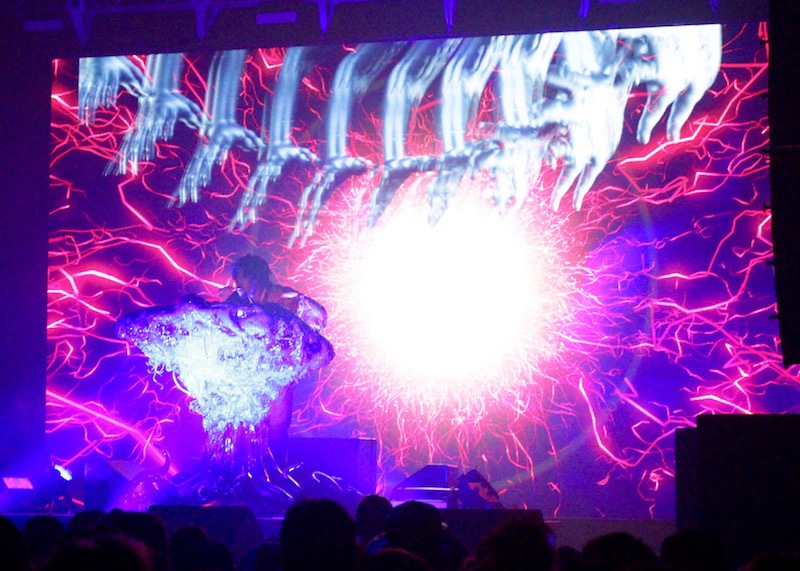 Flying Lotus in 3D in Montreal. Photo by Lisa Sproull

Electronic music shows have been pushing the envelope in terms of visuals for some time, and for an obvious reason: the star is usually stationary behind their gear and there needs to be something to enliven things.

Flying Lotus, Los Angeles producer and founder of outré jazz and hip hop nerd out label Brainfeeder, has put on a new show befitting his immersive, evocative composition-style. His music has always begged for vibrant visuals, and historically he hasn’t disappointed: his previous shows in support of 2014’s You’re Dead and 2012’s Until the Quiet Comes involved him performing in behind see-through curtains with colourful orbs and explosions projected onto them – sort of giving a sense of three-dimensions through layers – while his most recent project is a movie, Kuso, which has already been branded a gross and unsettling visual spectacle, but at the very least a memorable one.

His last two Montreal shows at SAT were somewhat hobbled by virtue of that venue’s physical restrictions, but at recently refurbished Metropolis/MTelus, with its improved sound capabilities for electronic music shows and large stage, Flying Lotus in 3D had no trouble soaring.

And soar it did, at times. Everyone at the show got a pair of 3D glasses upon entrance, and there was one sharp screen behind FlyLo, who stood in front of a nicely designed stalagmite podium. If someone got in your way and obstructed your view, or if you weren’t ideally centered in the room, the 3D-ness of it was somewhat less enjoyable, but when the glowing things started levitating or you started to feel like you were hurtling down an endless tunnel, it was hard to not audibly ooh and aah while FlyLo took you along for the ride.

Outside of the odd abrupt stop that suggested some minor technical difficulties, the sound had as much depth as the visuals, with layers of viscous, alien noises that pushed you deeper into the producer’s mind-bending universe. In a sense, FlyLo conceded the musical-meets-visual highlight of the show to his labelmate Thundercat, dropping his bass-playing colleague’s “Friend Zone” while a Star Wars-type ship spun around overhead to the amazement of everyone there. FlyLo’s alter-ego, rapper Captain Murphy, also made a couple of brief appearances, with the artist stepping out from his equipment to rap towards the front of the stage, while a cartoon Murphy head floated on the screen. It was another excellent use of the 3D effect.

Will 3D shows become the norm, as producers look for ways to better immerse concert-goers? At a certain point, no amount of spinning circles and waving hands could mitigate my restlessness – the truth is no matter how cool the sights were, I was there for FlyLo’s music, and I just wanted to dance without feeling the need to remain glued to a screen. ■