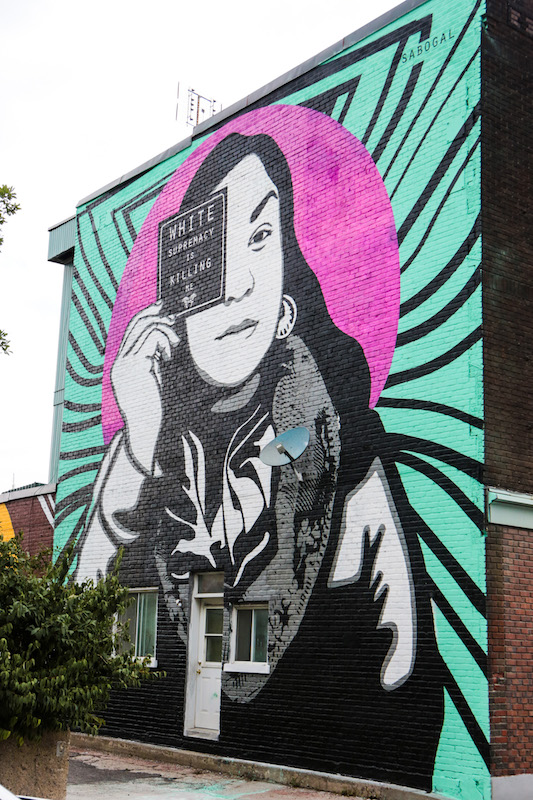 When Colombian-American muralist Jessica Sabogal first shared her design for the mural she planned to produce for this summer’s edition of the anti-colonial street art convergence Unceded Voices with the event’s primary organizer Cam, they expected that the piece may ruffle some feathers. Sabogal’s design features an image of a dark-haired young woman holding a sign partially covering her face stating “White supremacy is killing me.”

Since the work was brought to life, several instances of vandalism against the mural have sparked the neighbouring community into action to support the mural and its message.

“Jessica has been working on white supremacy for years,” Cam explains. “It’s one of her main subjects. Through her art, she can fight and spread her message. This is how we can be present in the street, and for sure not everyone is going to be happy.”

Sabogal, based in Oakland, CA, travelled to Montreal this past August to paint her mural on a St-Henri apartment building’s exterior wall as one of nine artists participating in this year’s third edition of the biannual Unceded Voices convergence, which also included works by artists such as Dayna Danger, Shanna Strauss, Elizabeth Blancas and Chief Lady Bird, all situated within walking distance of the St-Henri metro station. 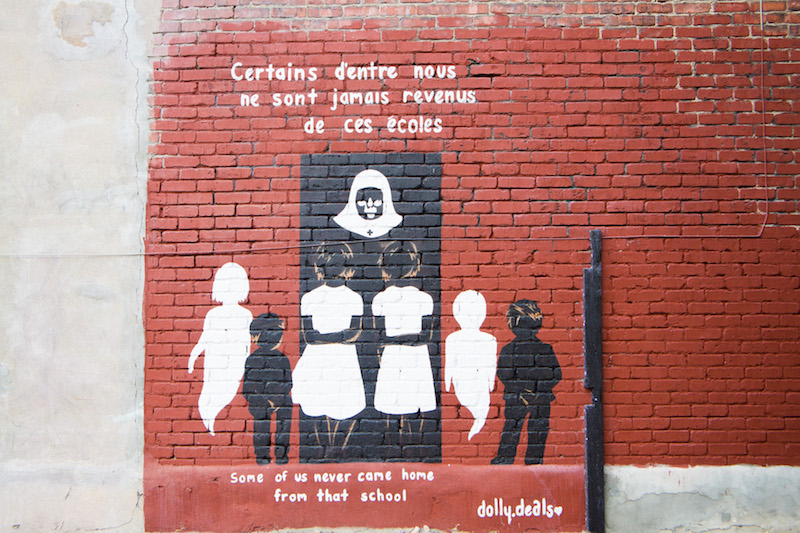 “It’s the first time we’ve done the project in St-Henri,” says Cam. “It’s an interesting moment to be there. The St-Henri community was really, really into it. Lots of passers-by and people came through the event to talk to the artists.”

Sabogal’s design and blunt message were developed weeks in advance, but the mural’s theme sadly turned out to be especially prescient when, just before the convergence events began, a crisis unfolded in Charlottesville, NC when a white supremacist drove his vehicle into a crowd of anti-racist protesters, killing one woman and injuring several other people.

Such events, coupled with hateful and divisive rhetoric from political leaders, anti-immigration policies and other injustices with racial undertones made Sabogal’s mural an especially powerful one for many, as reflected by the highly supportive and encouraging responses of neighbours and passersby during the convergence. However, at least one person disagreed and vandalized the new mural within days of its completion, spraying the words anti-white over the image and splattering red-paint-filled balloons across the wall.

“We weren’t surprised that it was happening.” Cam notes. “Jessica did this mural with this subject and this message—it’s very clear. The message is really intense, and some people can take it really personally.” 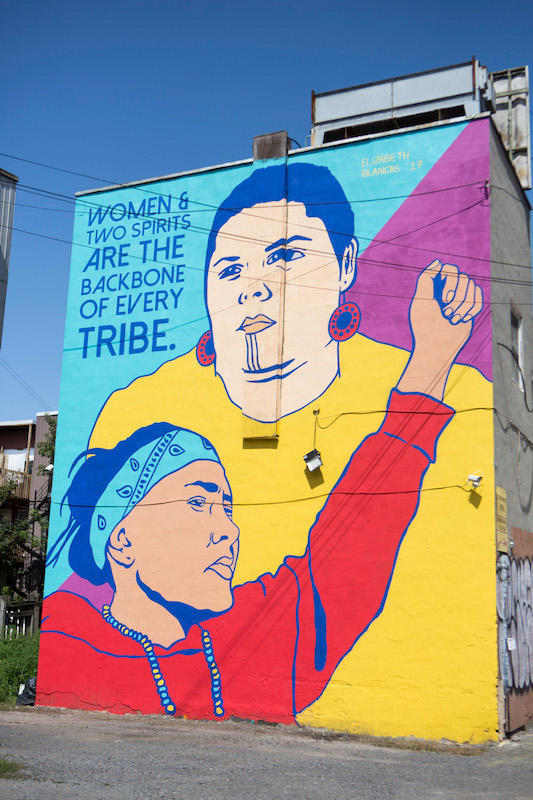 The mural was quickly fixed to cover the damage, but after two more incidents of vandalism within just a few weeks, a grassroots campaign to repair and protect the artwork sprang up in a St-Henri community Facebook group. A crowdfunding campaign launched by neighbourhood resident Lindsay Fleming raised over $1,500 in just 30 hours to cover the costs of repainting the damaged portions of the mural and coating the entire wall with a special anti-graffiti sealant, which allows any markings to be easily washed away with a pressure-washer without damaging the artwork underneath. Similar sealant layers are commonly used to protect commissioned artworks, but are prohibitively expensive for most independent muralists.

“When the mural was vandalized, a large number of people [in the St-Henri Facebook group] volunteered to contribute time and resources for its repair,” Fleming tells me via email. “The vast majority of posters wanted the artist to know that her work was appreciated and valued and that these messages of hate did not reflect the community as a whole. I saw this as an opportunity to put our money where our mouths were, get organized and actually take a step toward healing broken relationships and educating future generations.”

For Unceded Voices organizer Cam, the biggest surprise was not that the mural had been defaced in the first place, but rather the swift and passionate response from a broad group of community members and neighbours who took immediate action by bringing their time and skills to touch up the mural and by offering financial support to prevent further damage. Fleming and other St-Henri community members organized for the mural’s repair in consultation with artist Jessica Sabogal and Unceded Voices.

“There were interesting and important conversations about white supremacy in the Facebook group,” Cam recalls. “it was interesting to see how people would respond to it in the community. There were of course some people who were not into it, but most people were really supportive.” 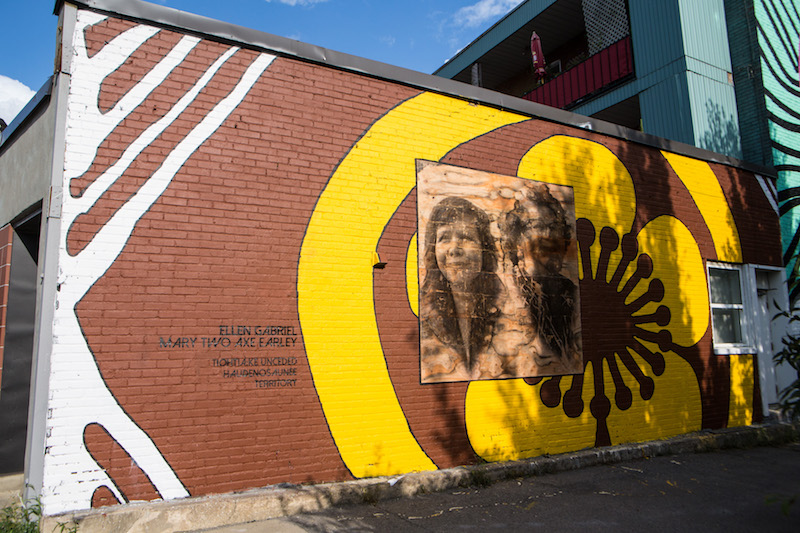 Among the mural’s supporters is St-Henri city councillor, Projet Montréal’s Craig Sauvé. After seeing the councillor’s reaction to the mural’s vandalism in the St. Henri Facebook group and in a CBC news story, Cam recognized that Unceded Voices had an ally at City Hall and got in touch. With Sauvé’s assistance, the organization successfully applied for and received municipal funding to support the mural’s restoration efforts.

“[Sauvé] really supported us and I’m really surprised and happy about that.” Cam says. “I feel that it’s the beginning of a real conversation and that people from the city are aware of white supremacy and other social situations that are happening, so I think it’s a good sign.”

For Fleming, who before moving to St-Henri from NDG was involved in several neighbourhood arts and cultural organizations such as Cheap Art Collective and la Ruche d’Art NDG, artworks like those created during Unceded Voices can help to bring important social issues further into the public consciousness.

“I think Jessica Sabogal’s work is brilliant and her message is important,” Fleming says. “As mentioned in the description of Unceded Voices, this work prompts a dialogue with the public about colonialism and the heterogeneity of Indigenous cultures. Before reconciliation comes truth, and these histories and identities must be acknowledged even if it gets uncomfortable.”

According to their website, Unceded Voices identifies a primary goal of their work the empowerment of women —particularly Indigenous women, women of colour and queer and 2spirit individuals — to feel confident to assert their right to occupy space in areas that have traditionally been white and male dominated. Through creating murals and public art, the organization offers support, skill sharing and community building opportunities. When more and more people see that (as illustrated by the recent events involving Jessica Sabogal’s mural) aggression and intolerance against marginalized groups will be shut down and not accepted by civil society, the closer we get to the goal of living in a society where everyone has the same chance to be themselves and thrive. ■

The murals of the 2017 Unceded Voices convergence, including the one by Jessica Sabogal, can all be found within a short walk from St-Henri metro. For maps, artist profiles, video and more, look here.