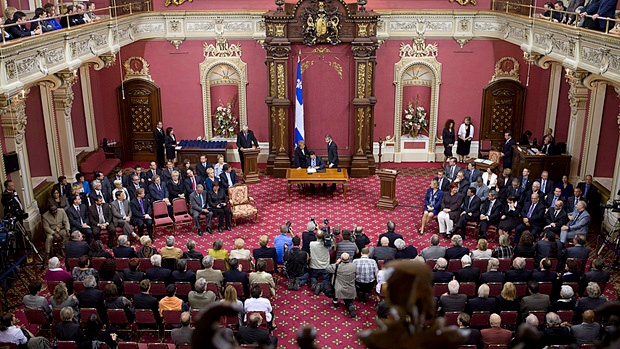 Half of Quebec’s Liberal MNAs — including half the provincial cabinet — don’t live in the ridings they represent in the National Assembly.

We’re not talking “carpetbaggers” here. These aren’t merely your average star candidates parachuted into an election in a riding where they have few or no connections. These are sitting MNAs, duly elected for the most part at least three years ago by the constituents of these ridings to represent their interests.

But who can’t be bothered to live there.

There’s no law against this. Nor should there be. We shouldn’t have to legally force an MNA to live in their riding, they should want to do it voluntarily, gladly, out of a sense of duty and connection to the people that gave them their jobs.

Yet Québec solidaire is the only party where all of its sitting MNAs call their riding home. While QS is three-for-three, only two-of-five independent MNAs live in their electoral districts according to an accounting published in today’s Journal de Montréal.

The CAQ is marginally better than the Liberals, with just a third of their MNAs acting as absentee deputé(e)s, while the PQ puts both those parties to shame with 25 out of 28 calling their ridings home. Unfortunately, one of the PQ holdouts is party leader Jean-François Lisée, whose Outremont neighbourhood could hardly be more different from his hardscrabble Rosemont district.

Liberal MNA Jacques Chagnon’s home on the South Shore riding of Montarville, which includes the bedroom communities of Boucherville and St-Bruno, seems a bizarre choice for the MNA for Westmount–St-Louis — but don’t worry about his tony constituents: there are no fewer than three Liberal cabinet ministers who live in Westmount instead of their home ridings: Economy and Science Minister Dominique Anglade (Saint-Henri-Sainte-Anne), Environment Minister David Heurtel (Viau) and Immigration Minister Kathleen Weil (Notre-Dame-de-Grâce).

Admittedly, Weil’s Westmount lodgings are a short bus ride from her NDG district and Anglade just a few clicks uphill from her working class circonscription — and many of these absentee MNAs defended themselves to the Journal by noting they live in a neighbouring riding.

But isn’t that the same as saying you almost made an effort to live where your electors do? That you gave it your full 67 per cent, but it wasn’t enough, and you fell several kilometres short?

It’s bad enough that backbenchers don’t snooze where they cruise the vote. But most of them at least spend time in the ridings, keeping hours at their local offices, regularly meeting constituents and fending off ribbons with giant scissors.

Cabinet ministers, on the other hand, spend less time in their riding offices than Santa Claus. When they’re not in Quebec City, they’re on a plane to Chicoutimi or Chicago, with weekly trips home to pat the dog and kiss the spouse. If their homes are in their ridings, they at least have regular contact with constituents (hopefully not just by waving at them from the limo as they drive back to the big Q.C.).

We ask a lot of our elected officials, as we should. We entrust them with the sacred duty of protecting and promoting the interests and values of the people who put them in office. They are well paid for the privilege, and given generous pensions that provide annual lifetime incomes that outstrip what many of us make in two, five or even 10 years.

Is it too much to ask that they hang their coats where they get their votes? ■