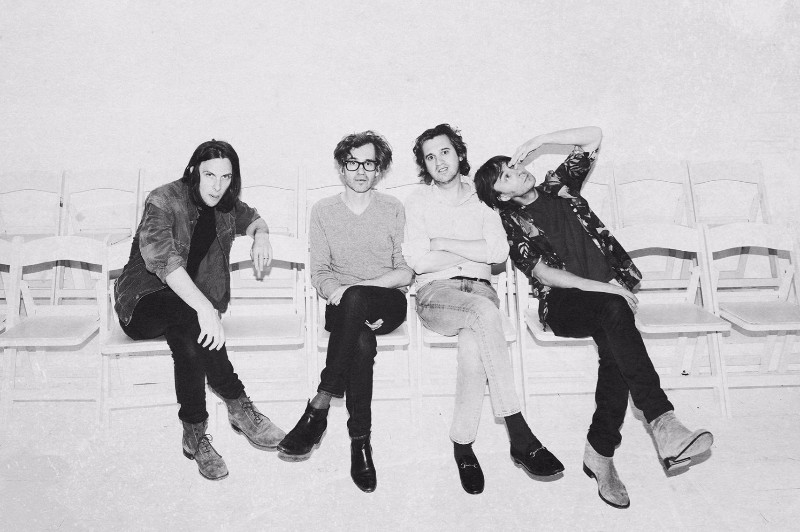 While receiving funding from mammoth EMI records, their track “Too Young” got a spot on the soundtrack of Lost in Translation, before singles like “Everything Is Everything” and “Long Distance Call” gradually drummed up fame on alt-rock radio and allowed them to tour around the world.

The band’s 2009 album Wolfgang Amadeus Phoenix found them in a true sweet spot. They had just signed to American-based label Glassnote and the solid combination of corporate distribution and artistic freedom made for an album with singles everyone knew and a biting front to back experience. Their 2013 follow-up Bankrupt! might not have scored the same amount of sales, but Phoenix again showed up for some late-night appearances and threw in a swirling seven-minute title track with dense layering to show that their creative energy wasn’t going anywhere.

When stepping forward with each record, bassist Deck d’Arcy says, Phoenix look for a fresh setting and new tools. “For every album, we set up a new place we’ve never been before,” he says, “a new studio with a new sound pallet, new instruments, everything to try and make something new.”

Having all met in primary school, the members don’t need to worry about losing track of the DNA of the band: “The goal is always to go as far as possible from who we are, because we know we’d always go back.”

The band’s weapon of choice for their sixth album Ti Amo was a repurposed 19th century opera house right in the middle of Paris. Having already lived out their fantasy recording sessions on Sunset Boulevard and a secluded German radio station, the hustle and bustle and close-to-home surroundings were a welcome change of pace.

“We used to do albums in a very remote studio, just the four of us, and we don’t really see anyone for like two years. So it was very different (this time) — a lot of people around, and yeah, we had a lot of new friends.

“When you listen to things with other people, it makes the problems stand out more easily. It’s not really what the people say, but more the fact that when you show it to people, you’re facing reality. You’re kind of in front of yourself, not in your fantasy anymore.”

The warm energy of downtown also seems to have resulted in a bit more of a direct, pop punchiness, in juxtaposition to the complex layering on Bankrupt!. “Bankrupt! was more like a heavy meal, and this one we tried to do something more minimalistic.”

Although the new songs are perhaps less complicated than those on their last album, the recording process was no less meticulous. D’Arcy cites something like 1,000 pieces of songs produced in the first six months of recording, calling for a new system of archiving. “It became an artistic side of our job to be able to archive stuff the proper way and use them on purpose, all the little ideas we have every day during the session. We started doing this a little bit on Bankrupt!, but we really pushed it on this one.”

The constant recording of ideas plays into their emphasis on off-the-cuff improvisation. One day, lead singer Thomas Marr started to incorporate some Italian into one of their songs, “Fior di Latte” — an ice cream flavour. D’Arcy says that the band was inspired by Italy a bit — despite all having grown up in Versailles, two of the band’s members are Italian (as is this album’s title) — but not to the point of a specific homage — “…more like an aesthetic pretext.”

Ironically, their Italian interpolations have come up more in interviews than the French lyrics that also make their way onto the album: “Everybody before was like ‘ahh you should do a song in French’ and now we did one in French and nobody cares. Everyone talks about Italian.”

It’s all about understanding their European roots, while also challenging themselves to approach sound in a different way. Kraftwerk, D’Arcy adds, is a group who played “their music all around the world, talking about being inspired by their home, which is a very industrial and grey area in Germany — that’s their fuel, and we try to keep the same attitude.”