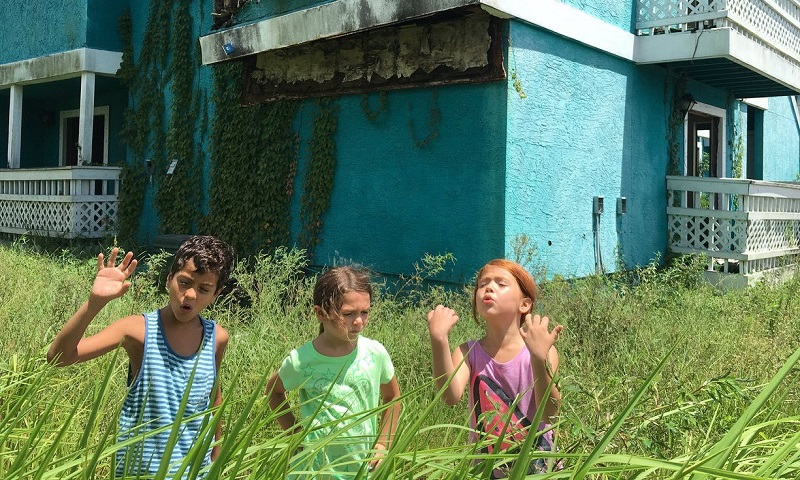 The fact that Sean Baker’s Tangerine was shot on iPhones (and looked pretty good, considering) seemed to get more press than its affecting yet unsentimental portrayal of trans sex workers and the performances of its two leads (Kitana Kiki Rodriguez and Mya Taylor), neither of whom had any acting experience prior to being cast in the film. Baker takes more or less the same approach in The Florida Project: the lead roles are filled with non-professionals while the supporting roles are held by recognizable figures like Caleb Landry Jones and Willem Dafoe. Baker shot The Florida Project on 35mm film (except for one key sequence, where he whipped out the old iPhone), but his latest film shares with Tangerine a real affection for the downtrodden and unseen corners of society.

The Florida Project revolves around a ramshackle motel on the outskirts of Disneyworld in Florida. The semi-decrepit, blueberry-yogurt-coloured monstrosity subsists mostly on weekly payments from the poorest sliver of Floridians unable to secure permanent housing: ex-cons, addicts, teenage mothers and, once in awhile, a tourist with a shaky grasp of English who books expecting something a little ritzier.

Though the hotel’s manager, Bobby (Dafoe), has plenty of compassion for his tenants, he also knows that he has a job to do. It proves particularly difficult to put his foot down when it comes to Halley (Bria Vinaite) and her six-year-old daughter Moonee (Brooklynn Prince). Completely broke, lacking prospects, with a loud mouth and hair-trigger temper, Halley doesn’t seem like the model mom – but she’s all Moonee has, besides her friends and the seemingly boundless stretch of trash-littered Florida swampland that surrounds the hotel.

The Florida Project unfolds in vignettes, and while they don’t all have a direct bearing on the advancement of the plot, they always serve the texture of the scenes. Sometimes it’s just Dafoe performing one of the many tasks that come with the job. A lot of the film is simply Moonee and her friends playing, as kids do; they have a spitting-onto-a-car contest or make up a silly game that removes them – if only briefly – from the misery around them. I asked Baker how much of that was scripted.

“I wish we could have captured more of it on the fly, but we didn’t have time,” says Baker. “A lot of those texture scenes, as you put it, had to be scheduled. We wanted to shoot more of Willem doing his managerial duties, but we were almost out of time. It was a very tight schedule, but I would say things like, ‘Let’s just blow the leaves out of the driveway,’ and he would get down and we’d document him doing it. We tried to have as much as possible to show that mundane, everyday life of the dragging summer.

“The texture stuff is what makes films, for me. I’ve been reading some of the reviews for this film and some people are saying it’s under-plotted, or that it doesn’t have much plot, but that ‘we feel so much a part of that world’ and ‘we love the characters’ – well, yeah, that’s how I got there! (laughs)”

Baker juxtaposes the image of touristy Florida with the reality of the motel’s inhabitants, almost all of whom are barely scraping by while others are parting with millions of dollars just down the road. The Florida Project plays not only with the idea of class, but with the very image of the strangest state in the Union.

“It’s a very unique state,” says Baker. “All children see that area of Florida as the best place in the world. That’s why we thought if we could show that there’s a hidden homeless situation here, of all places, it can happen anywhere. And it is – it’s a national problem. There’s quite an issue in Boston, there’s quite an issue in San Bernardino and the OC, as well, outside of Disneyworld. It’s a nation-wide problem. (…) If you add it up, they’re paying just as much rent, yet they’re stuck in a situation where they can’t get permanent housing. It’s even worse – they’re in a very bad economic situation and they still end up having to pay what I pay! I pay $1,200 a month for my apartment in West Hollywood – they’re paying just over $1,000, yet struggling on a week-to-week basis, and sometimes night to night basis.”

There are many incredible things about The Florida Project; the motel they found is one of them. “I think that that motel had gone through many stages,” says Baker. “It had just recently had a paint job. It was a little more run down when we first saw it a few years ago, but yes – I found the Magic Castle and thought ‘How can we not shoot here?’ There are many themed hotels on Route 92. It’s changing now  – there’s a beautification process going on by the local government – but when we saw that… How can we not shoot in a place that literally looks like a castle?” 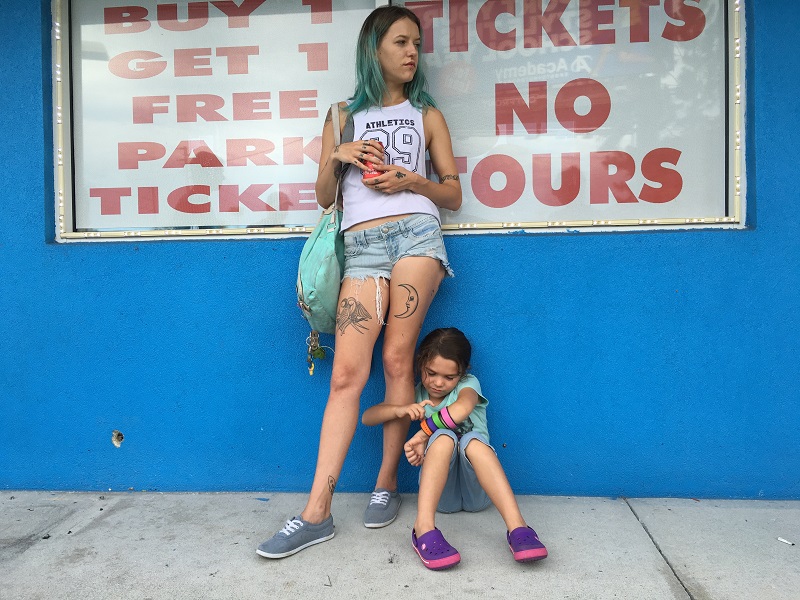 “I always like to mix it up,” Baker says when asked if he sees the casting of Dafoe as somewhat of a departure from Tangerine. “If you look at Tangerine, I had James Ransone from The Wire. I always do mix in my seasoned, professional – actually, that’s the wrong word. I consider all my actors to be very professional! What I’m trying to say is that I like to mix seasoned actors with first-timers. Then there’s that other group of non-professionals, where this is the first and only time they’ll ever be acting. For example, there’s a scene with a condo burning down – all the extras are just locals who wanted to participate. They’re playing versions of themselves.

“I was worried about Willem because he’s so well-known,” he continues. “He’s globally known and he’s known for being, you know, the Green Goblin! I was worried that that suspension of disbelief that’s required for a movie like this might take longer – or it might not even happen at all. You see Willem – you know that’s Willem Dafoe. But no – he’s so transformative that he was able to erase that. It’s my movie, so I guess I have to say that (laughs) but he becomes Bobby the minute she slams the door in his face and turns away. I feel like he just is Bobby.”

Caleb Landry Jones plays Bobby’s son in a handful of scenes – a casting choice that seemed an inevitability considering that the two actors have such similar qualities. “That’s what I thought!” laughs Baker. “That was important to me. In the script, he had this brother who was kind of helping Bobby along and getting these side jobs at the motel. But then we cast Willem and needed to explore our options. I knew Caleb from my friends the Safdie brothers, who made Heaven Knows What, and I thought ‘Wait a minute – we gotta do this!’”

I bring up something that had always struck me as strange – around the release of Tangerine, some reviews and profiles of Baker suggested that he still lived with his parents, as if to outline the harsh financial conditions that led to the making of that film.

“I think you probably heard that from the Bret Easton Ellis podcast,” laughs Baker. “It takes three years to make a movie. Thank God I’m in the union now and making the minimums, which gets me by for those three years, but if you’re not? I got myself into a situation where even after a couple of features and a television show, I was still almost down to zero. I’m lucky enough to still have parents who are supportive into my 40s, and so I had to float for a few months with them helping me out. It was a real humbling moment, where I was starting at one again. At the same time, I felt it was important to talk about that on the podcast because I know that there are lots of first-time filmmakers who are probably struggling with the same thing. Just keep going! I made Tangerine and it got me right out of that and now this movie has happened because of that.” ■