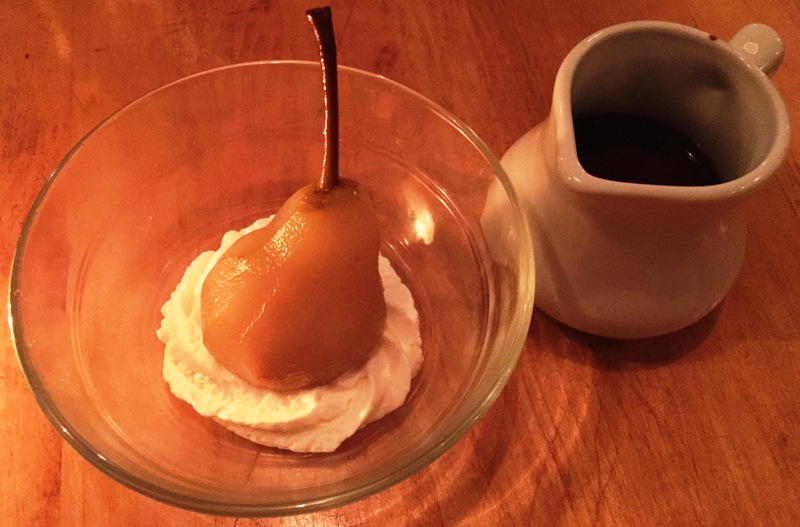 Evoking the comfort that comes with a home cooked meal can be a complicated endeavour for restaurants. It can be a source of constant inspiration for many chefs, chasing the replication of recipes from the fondest of memories, but capturing the familiarity of the familial in every aspect of an eatery is a different beast altogether.

Landry et Filles is one of the few that gets it right: It’s in the hardwood tables, the clothespins on the cutlery’s napkin wraps, the daily specials written on paper bags that are taped to the wall. Its decorations are less bric-à-brac and more of the rec room variety, personal mementos like family photos on the walls and Archie comics in the bathroom. With a mix of classic rock and reggae playing as I looked over the menu, I got the feeling I was in the extended act of a kids’ table at a big family dinner, one belonging to Josée-Ann Landry, Lisa-Marie Veillette and the chef Marc Landry. With a “bière spritz” in hand — a salty-but-sweet mix of beer, aperol and lemon, punctuated with an olive — I felt like they had my back. 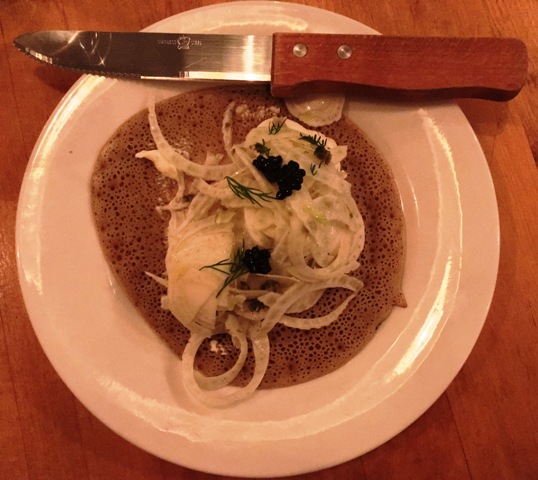 Roots of the restaurant’s interior aside, the roots of the chef are on full display with one look at the menu. Particular recurring items include chicken served either roasted or fried, as well as ploye, a Brayon buckwheat crêpe coming from New Brunswick’s Madawaska region. While self-described as a snack bar, L+F generally serves dishes like this as shareable plates, but many—as I’d find out along the way—would easily serve as full meals, or stopping in for a bite. That’s likely the reason why this place offers its chicken as a takeout option for the neighbourhood.

Seeing as the first day of fall had just passed, I thought it best to choose some of the menu’s more heavy autumnals, starting with stuffing fritters and a side of ranch dressing ($8). Served in an escargot dish, these crunchy two-biters were a premonition of two things to come in other dishes: with the right amount of grease to each bite, they were far from being overbearingly heavy on the stomach, but the accompanying ranch—while tangy enough with its garlic and herbs—lacked acidity, and a slice of lemon on the side wouldn’t have killed the dish. 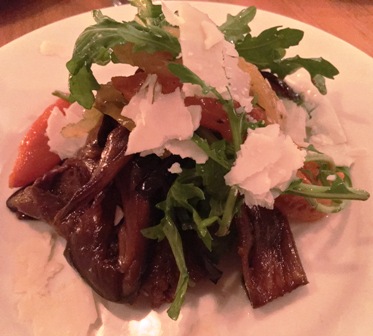 This was followed by their ploye ($9). To say nothing short of the pancake itself, its mishmash toppings of gravlax, fennel and caper salad with cream cheese, caviar and hardboiled egg (say that five times fast) made each bite a varied mix. I found myself smashing the ingredients together in order to get the full flavour profile of bitter, sour and sweet. Maybe that was the point of it — why not play with your food a bit when the opportunity arises?

Before the main event came the grilled eggplant with a tomato confit ($8), one of the top dishes of the night. Thick slices of the porous fruit were laid on slow-roasted tomatoes with sprigs of roquette and goat milk cheddar shavings on top. Each bite left a fatty, pleasing residue on the tongue, sharpened by the sweet and acidic notes of tomato and cheese, plus the vinaigrette the leaves were briefly rolled in. With little seasoning on each slice of eggplant, letting the grill do its job for a pure and pleasing texture, my only wish is that the meal had started here. 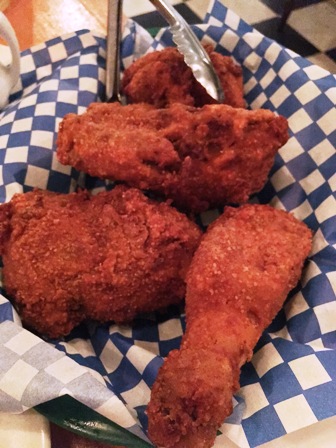 But what’s a visit to without a bit of their bird? It’s worth noting that after every dish I’ve mentioned trying so far, chicken would seem, to many, like overkill at this point —especially considering that I also ordered a side of new potatoes with lime horseradish ($8) with a half-order of the fried variety ($18). The former was a small plate of wedges whose citrusy underlay, a great pairing of pungency, was exactly what I needed after flavours past and present that leaned more towards fat and salt. As for the chicken, I’d recommend a half-order of the roasted sooner than fried. Its skin was on the egg and crumb side, a thick breaded shell that fell off after a bite. The first bite was delicious, the third began to fill me up, and the final plucks were far too filling and were pure overkill, only saved by the variety of hot sauces they provided.

Finally, L+F are the sort to feature different specials at any given time, so visit soon and you may get to try this one: A single poached pear laid on cream with a small pot of half-dark chocolate sauce ($10). It was exceedingly delicious in its simple execution, and everything was eaten save its stem.

While at times exceedingly hefty in its options, it’d be pointless to stop by here without the expectation of an expanded waistline. Landry’s concoctions are a soothing take on homebody food, one better spent enjoying while reclining into your seat than being on the edge of it. Just make sure to have your priorities straight when picking courses and snacks from the menu; after this trip, I wasn’t much different from Violet Beauregarde. You could’ve rolled me home. ■