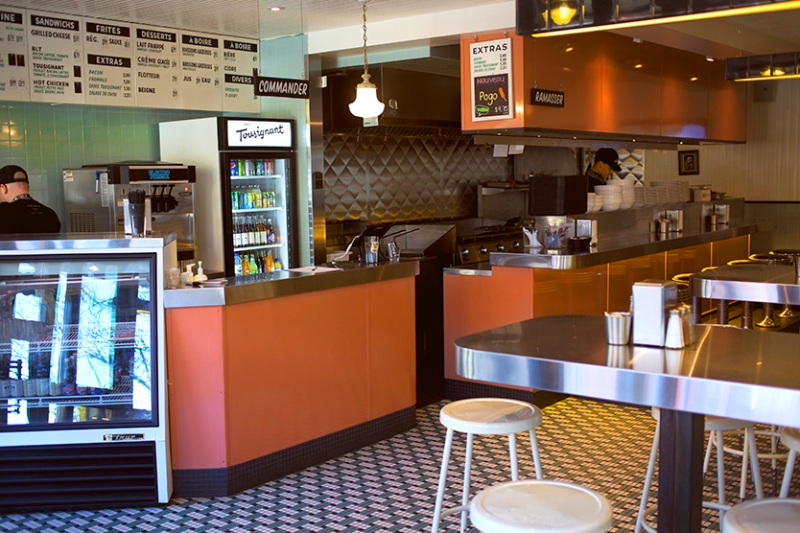 Out of every possible move a chef can make, working with the basics might be the ultimate test. Casse-croûtes are a good example; while flipping burgers is synonymous with the lowest rungs of food production, these restaurants are an element in Quebec’s culinary periodic table. ‘Anyone’ can do it, but can they do it right?

Little Italy is not the first place that comes to mind for casse-croûtes, and yet chefs Yann Turcotte, Michele Forgione, and Stefano Faita (Impasto, Pizzeria Gema) decided to build Chez Tousignant around the corner from the red, white and green of the Dante and St-Laurent strips. The unassuming presence of this little restaurant, free of gimmicks or kitsch, gives the impression that it’s just one of gang. Its vintage design by Zébulon Perron is so precise in its stainless steel and formica tabletops, its tiled floors, hand-painted signage and stools that it’s an effigy to the institutions of diners and snack bars. The simulacrum of the 1960s stops short there — this is a greasy spoon without the grease.

Living across town from its neighbourhood, I’d been meaning to visit Chez Tousignant ever since it started up just under two years ago. The only thing that got in the way was distance. Why travel across town for a greasy bite if there’s bound to be one not as far from your front door, right? Doubt all you want, but there’s plenty at CT that makes it worth your while.

That’s not to say some aspects aren’t lacking. A friend and I made the trek there from down south, having only done a minute amount of research before visiting, reading the menu on the metro. I was little sorry to find out that the restaurant’s choices had been pared down since it was first opened: Options like rotisserie chicken, lobster and shrimp rolls and desserts like pies and frozen custard previously promised in past coverage have been stripped away, at least for my visit. Instead, we tucked into the classics with some Tousignant soda.

As for that previous question about whether or not Chez Tousignant gets it right? They do. I’ll just preface this by saying I know that preferences regarding hamburgers, hot dogs and poutine are so relative and diverse that I’ll dispense with my own expectations. 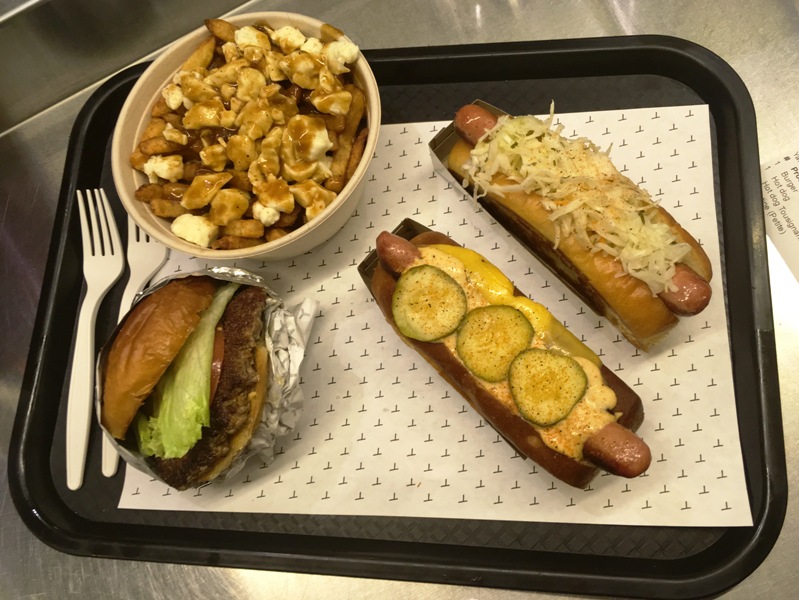 The classic cheeseburger ($6.25) is served with tomato, lettuce, pickles, onions and the Tousignant sauce, which recurs on several other menu items. The potato buns these burgers use gave it a light buttery flavour without sacrificing structure, the toppings were fresh and their signature sauce rounded out each bite in a savoury condiment mix that had hints of onion and garlic powder. I’d have liked their smashed style of patties to be cooked a bit more crispy, however. It’s just what griddles were made for.

The poutines ($7.75 small, $11.50 large), like the hamburger, didn’t disappoint. Some important points to make here was that their curds were room temperature, and the fries were crispy. As for the sauce, it had good coverage, tasted of both chicken and beef broth, and coupled well as a topping. Not overwhelmingly seasoned, the gravy walked that fine line between thick enough to seep through while not being so thin that it forms a soupy mush at the bottom. The troch was carried well with this one.

Above all else, it’s the hot dogs that you have to try. They appear to have received the most attention in kitchen tests, with Turcotte working on the meat while Forgione tinkered with buns. The sausages have a pleasing snap to them that you can’t get from a Lesters dog no matter how you cook it, and the potato buns are done toasté with ample caramelization on the exterior. While the classic option ($5.25), with its crunchy tang of coleslaw and mustard, is a sure-fire bet, go for the Tousignant ($7.75): American cheese is melted along the trench of the bun, followed by crispy bacon, and the dog, and topped with sauce and pickle slices. It might seem strange to praise a hot dog this much, but it was such a wonderfully constructed and flavourful creation that I’d deem it the best I’ve had in this city. You have to try it once.

Running from 11:30 a.m. to 10 p.m., Chez Tousignant has my vote for best snack bar open hours deep into the evening. I can only hope they’ll eventually put their classic diner desserts — other than ice cream and donuts — back onto the menu. But if you’re looking for that frozen custard? Follow up your meal with a trip around the block to Pizzeria Gema to be impressed twice. ■