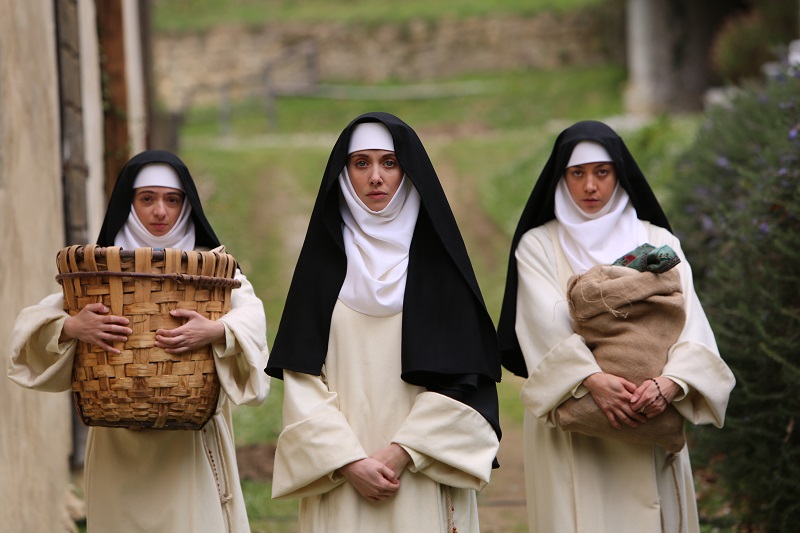 No one ever applauds a film’s one-joke premise, no matter how good that joke is. Jeff Baena’s The Little Hours is, by definition, a one-joke premise. If you removed the joke, you wouldn’t lose the film, but you’d have pretty much a straight adaptation of The Decameron with comedic actors.

Baena essentially makes a straight version of the third day – first tale segment of Boccaccio’s classic series of novellas, with the chief difference being anachronistic, present-day dialogue – and it works. It shouldn’t work, really, beyond a skit’s worth of material. (It was already sort of attempted – with a thundering whiff and a miss – in the 2007 film Virgin Territory, starring Hayden Christensen.) The comedic premise of The Little Hours should not extend past maybe 10 minutes, and yet it does, precisely because it takes that concept and runs with it shamelessly.

Sisters Alessandra (Alison Brie), Ginerva (Kate Micucci) and Fernanda (Aubrey Plaza) all live in a remote convent in 14th century Italy run by Father Tomasso (John C. Reilly), an optimist constantly undone by his love of the drink. None of the sisters are particularly enamored with the pious lifestyle they’ve been saddled with: Alessandra was placed there by her once-wealthy father (Paul Reiser), who can’t afford to keep her alive unless she marries rich; Ginerva is such a repressed and wide-eyed innocent that she doesn’t really seem to know that anything else is possible even though she doesn’t fit in, and Fernanda seems to have a whole secret thing going.

On one of his outings, Father Tomasso comes across a young man (Dave Franco) who has fled from the castle he was working in as a servant after he was caught boning down with his master’s (Nick Offerman) wife (Lauren Weedman). With a couple of numbskull guards (Adam Pally and Jon Gabrus) after him, he has little choice but to accept a position as a helper at Father Tomasso’s convent – provided, of course, that he pretend he’s deaf-mute in order not to disturb the nuns. His arrival has the opposite effect, stirring up all kinds of emotions in the nuns that seriously complicate shit.

The Little Hours remains more fully realized than Baena’s first two films (the zom-com Life After Beth and the improvised Joshy), which were fine but unfocused comedies. Baena seems to have a clearer sense of purpose here and a more defined voice than before – he avoids using the film’s anachronisms to make some dumb Epic Movie-style jokes and manages to play each character to the performer’s strong suit.

Ultimately, though, The Little Hours is a performer’s movie, a movie that works because of the people in it. Baena’s choice to cast it entirely with seasoned comedy ringers (as opposed to giving ostensibly serious performers like, I dunno, John Malkovich and Brian Blessed some silly shit to do) pays off constantly, from the goggle-eyed insanity of Micucci’s descent into madness to Fred Armisen’s extended cameo as an exasperated higher-up in the church tasked with cleaning up the unholy mess that follows.

It’s always a little hard to talk about a joke-heavy film like The Little Hours without getting into some joke dissecting, which is coincidentally also the best way to ruin some jokes. The best thing I can say about The Little Hours is it has no business being so consistently funny for an hour and a half; it’s a statistical improbability. So there you go. ■

The Little Hours opens in theatres on Friday, Aug.11. Watch the trailer here: