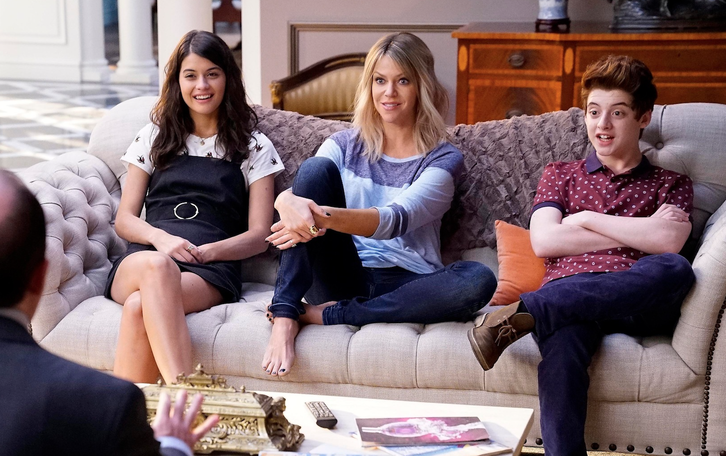 Kaitlin Olson (centre) with two of her TV kids, played by Sofia Black-D’Elia and Thomas Barbusca

Just for Laughs’ ComedyPro is the world’s top industry event for anyone in the realm of comedy, whether already accomplished or aspiring. With panels, pitching, conferences and more, the four-day event has become an integral component in the overall programming of the festival.

Among a highlight of this year’s ComedyPro gathering was a panel featuring the creators and star of Fox’s rising hit sitcom, The Mick. The show sees former It’s Always Sunny in Philadelphia executive producers John and Dave Chernin teaming up once again with star Kaitlin Olson for an unforgettable series following a deadbeat aunt who gets custody of her wealthy sister’s three spoiled children.

Ahead of the panel, we caught up with the trio to discuss the series, parenthood and plenty more:

One word to describe The Mick:

On the main differences between making a show for FOX vs. FX:

KO: It’s really hard for me to get through a sentence without a goddamn in there somewhere.

JC: And Jesus! They don’t like Jesus on Fox. [pauses] Well…they love Jesus on Fox, they just don’t want you to say it.

KO: I kind of have to go against a lot of the natural things I would do [as a mother]. Like if someone’s upset, I usually wanna comfort them and I have to laugh at them. [Laughs] I think it’s prepared me off-camera. I have a good time coaching [the child actors] and talking to them, keeping little Jack [Stanton] in line, stuff like that. These kids are awesome, they’re a lot of fun to work with.

Kaitlin on balancing filming two shows and being a mother:

KO: It takes a lot of planning. I’m tired, but I love both of them, so I actually feel like I am a better mom because I’m not seeing them as much. The time with [my kids], I’m on top of my game. We do really fun stuff. I’m very patient because I know it’s just a couple of hours.

KO: I miss them when I don’t see them a lot. But we just had a great summer together. They come and see me after they’re done with kindergarten, they come hang out in my trailer a little bit. We make it work.

John on how not having children affects the writing process:

JC: I think sometimes we will go places that people who have kids won’t go because we don’t understand the gravity of how you could really fuck up a kid. It frees us up to do some dark stuff sometimes.

On what fans could expect from The Mick’s second season:

DC: We’re definitely going to explore the housing situation in the first couple of episodes. Chip may or may not be figuring out who his real dad is this year… and just more of the same shenanigans.

On the meaning of life:

JC: Is there a meaning of life? It all seems just…

DC: I think the sooner you realize that there is no answer, the happier you’ll be. ■

The Mick returns to Fox (and CityTV) for a second season on Sept. 26.