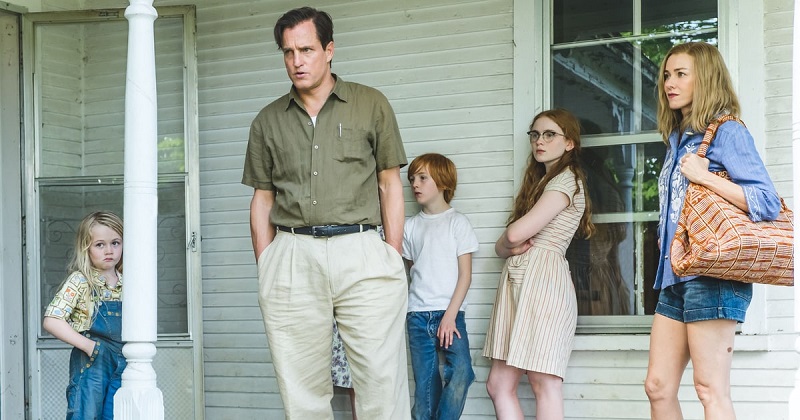 Woody Harrelson and Naomi Watts in The Glass Castle.

It’s certainly a weird, intrusive thing to write a memoir about your own dysfunctional family knowing that they will almost certainly read it. There’s almost inevitably a sense of bravery that will be assigned to it — I haven’t read Jeannette Walls’ The Glass Castle, but it certainly seems brave. What’s touchier is whatever you call what happens when a filmmaker whose life it very pointedly isn’t comes in and adapts the very personal, very brave words you put down on the page. Director Destin Daniel Cretton is faced with a particular challenge with his sophomore feature based on Walls’ memoir: he’s making a movie that’s supposed to pull no punches in a context where he knows (and apparently works with — the credits are filled with home-video footage ostensibly shot for the film of the protagonists in the present day) the subjects but has no personal connection to them beyond the fact that he’s the one making this movie.

It’s not an ideal way to tell a story, and certainly not one as potentially raw and emotional as this one. Cretton’s The Glass Castle is weirdly polite and sedate considering what it deals with; handsomely mounted and very dramatic but rarely organic enough to warrant cutting too deep. I can’t shake the feeling that I would also have made this movie — a glammed-up version of the deglammed — if I knew that the people I’m depicting might see this and point out that, well, I wasn’t there.

Rex (Woody Harrelson) and Rose Mary Walls (Naomi Watts) are the kind of salt-of-the-earth proto-hippies who don’t believe in systems of oppression like school or gainful employment. They live as semi-nomads, often moving in the middle of the night when the utilities get cut off and fostering both a sense of adventure and a profound distrust of society in their four children. Rex is a hard-drinking idealist, a smart man often undone by his own ambitions and his love of the bottle; Mary Rose stands by him through thick and thin, enamored with his sparkle-eyed glee but often on the receiving end of his alcoholism. Rex loves his children, he says, though he can hardly take care of them.

The film shifts back and forth between these flashbacks and Jeannette’s life in the present day. Now a successful gossip columnist portrayed by Brie Larson, she’s engaged to be married to a boring finance guy (Max Greenfield) who represents the stability she never found in her life. Her parents are still around, living in a squat on the Lower East Side, and Jeannette’s old life and her new one inevitably collide as she attempts to reconcile both her lives and her relationship to her difficult father.

This framing story proves to be the film’s weakest link, despite the fact that it also contains a great performance from Larson. The flashback sequences (which can barely be considered as such since they take up the majority of the film) have the kind of organic emotional grounding to them that can only come from real events. The stuff in New York suffers from a lot of yelling around monocled high society and awkward cinematic shorthand symbolized by Greenfield’s stuffed-shirt milquetoast. Apparently this material isn’t explicitly in the book and it certainly shows in the awkward way it frames the main action. Then again, Larson is so good in it (she managed to wring a few tears out of my calcified heart, a difficult proposition in even the best of situations) that it’s also hard to justify her not being in the film at all. (The structure also winds up giving the other children the short shrift, though this may be chalked up to the inevitable casualties of adapting for the screen — they’re all given a cursory arc, but not much else.)

The stuff set in 1989 also commits a cardinal sin of real-life adaptations — it makes things that actually happened seem clichéd and canned, even in the flashback sections. Rex’s alcoholism is both terrifying and weirdly cartoonish in spots, alternating between a harrowing depiction of addiction and the town drunk in a John Wayne movie; the so-called “present day” sequences (with Harrelson in an admittedly pretty silly wig) only heighten that disconnect. There are incredible singular scenes in The Glass Castle, but that’s also sort of the problem — it’s a fragmented collection of anecdotes that never really coalesces in a whole. (It’s probably worth mentioning that the New York sections of the film were actually shot here, though very few landmarks make the cut.)

Cretton’s breakout film was Short Term 12, a frayed-nerve drama set in a foster home that also starred Larson. What was so admirable about Short Term 12 is what’s crucially lacking from The Glass Castle, which feels airless, lacking the lived-in feel that makes Short Term 12 so affecting. I have no reason to actually believe that Cretton purposely made this film tamer than it needed to be for the purpose of appeasing all of the living people depicted in it (which, at this point, is everyone except the real Rex Walls), but that’s the way it feels. It’s a difficult thing to tell anyone else’s story, especially when it’s this one. ■

The Glass Castle opens in theatres on Friday, Aug. 11. Watch the trailer here: