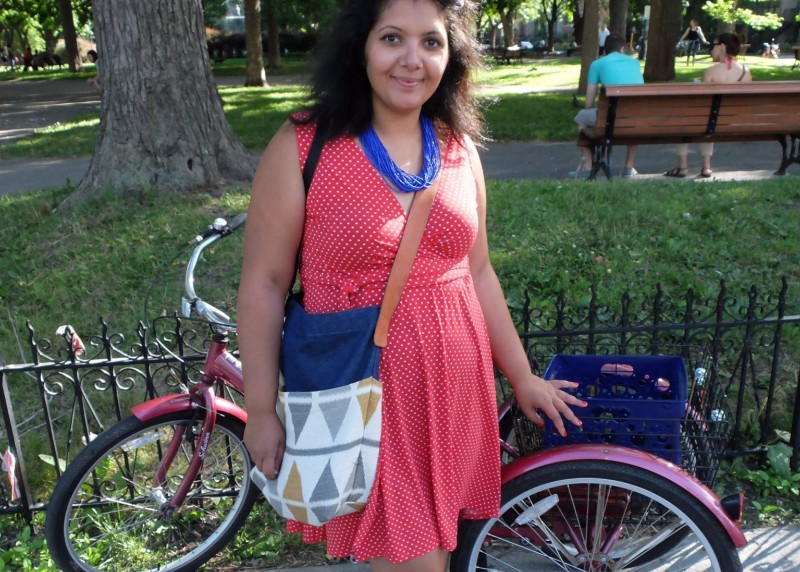 The author with her stolen trike.

This is a city where bikes get stolen. This isn’t exactly news. Speak with almost any cyclist living in Montreal, and they probably have had to replace their bike due to theft at some point. I’m a new cyclist. I only started biking last year. I have Multiple Sclerosis (MS), which affects my balance. I can’t ride a normal bike.

Last summer, I bought a tricycle to get around town. It completely changed the way I interact with the city. With MS it is  important to stay active and tricycling around town helped me do that.

Two weeks ago my tricycle got stolen. Though I was completely crushed, the events that took place after renewed my faith in humanity and gave me an incredibly deep appreciation for the people who live in this city.

After I realized my tricycle was missing, I put up a quick Facebook post with a picture of me with the trike. “HELP Montreal,” it said. “My tricycle just got stolen, either last night or today. I can’t ride a normal bike because I have Multiple Sclerosis and my balance is messed up. Please help me find it…” I was hoping that my friends would keep an eye out for me, I could never have dreamed how far this post would go.

To take my mind off the theft, I went to hang out at Champ des Possibles. When I got home, there were over 600 shares from friends and strangers. On top of that, a man named Liam, whom I have never met before, nor have any friends in common with had was so touched by my story that he created a GoFundMe campaign asking for people to chip in to replace the trike if it wasn’t found. Though I didn’t end up using any of the funds, the gesture was overwhelmingly kind and thoughtful.

The next day, the number of shares went up to over 1,100, mostly from people I don’t directly know. People from Verdun to Hochelaga sent me snapshots of red tricycles. I received endless notifications of people sharing my post denouncing the thieves, expressing their outrage and sadness over the theft.

One of the people who got in touch was Ramona. She wrote to me saying that she had an extra tricycle that was used for an art project years ago, and that she was in the process of seeing if it could be passed it on to me. That evening, just one day after my call for help, Ramona got back to me saying the tricycle was mine.

Meeting Ramona, a fellow social artist, and hearing about the backstory of the tricycle was very uplifting. The trike was used for 3 Mile Meal a project that brought residents in Mile End, Outremont and Park Extension together through food, to try and create a better sense of understanding between them. I felt privileged to have not only received this gift, but a gift that had a meaningful story behind it.

It continues to amaze me how many people cared, and how much they were willing to help. One of these people is Dominique from Vélo Volé, a Facebook group that tries to reunite people with their missing bikes. He wrote a Facebook speech addressed to the thief pleading with them to return my trike. In it, he talks about the effect bike theft has on people and how, in my case, it helps me to make the best of my experience with MS, which is degenerative and sometimes keeps me in bed for days at a time.

Once he found out about the tricycle that was gifted to me, Dominique got in touch. He told me he wanted to gift me a very strong lock so that my replacement tricycle would be less likely to get stolen. When we met, he gave me a lesson in theft prevention and a solid lock and chain for my new wheels.

The last few days have been so unbelievably touching. I am still in awe of the community support, generosity and kindness I have received. To this day I am receiving messages, links to Kijiji ads and texts from people trying to find my lost tricycle.

I wanted to write this to express my deepest gratitude to everyone who helped me get riding again so quickly. I don’t know what exactly about my story connected with so many people, but I truly appreciate every single gesture. The way this has unfolded over last few days reminds me why I fell in love with this city in the first place and the amazing people who live in it. Thank you Montreal. ■