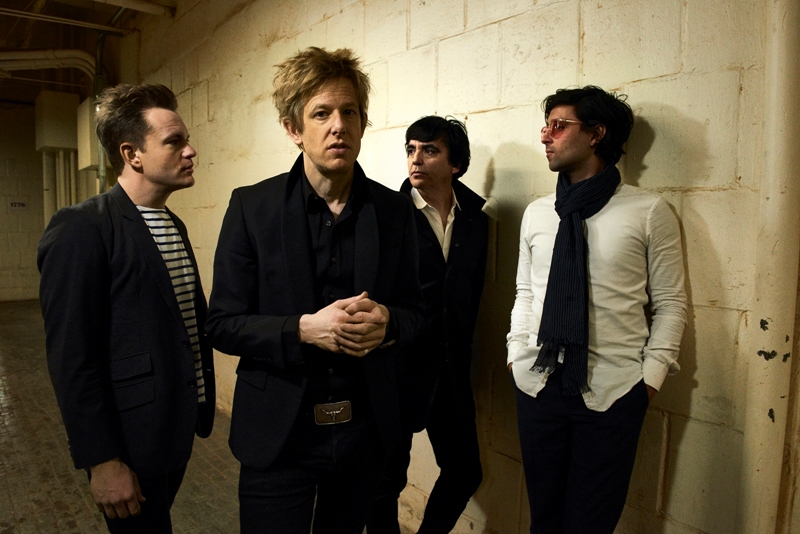 Hot Thoughts is rife with sonic homages to Prince, frontman Britt Daniel’s favourite performer ever, while also being an album with lyrics about tearing down Donald Trump’s infamous (though yet to be erected) Mexican border wall. And while the purple-y sexiness of Prince-ish music seems an odd fit for steely, defiant, socially conscious lyrics, the balancing of such contradictions is no issue for Daniel. After all, he’s a funk-loving indie rocker who sings like a British New Wave King, all while hailing from the deeply Southern small town of Temple, Texas.

“There was no local alternative rock station on the dial when I was growing up, that’s for sure,” Daniel says. “There were a few freaks in Temple, but most people were either into country music or metal. It was kind of closed minded, in a way.

“Or maybe I shouldn’t say closed minded,” he adds with a chuckle, “but it was a very clean, white place. It’s just about preferring different aesthetics, I guess — some people just prefer being small town people. But when I moved to Austin, and could go out to 24-hour spots and play video games at four in the morning, that’s what I was drawn to. And it felt like a whole other world at first.”

Daniel formed Spoon in Austin with pal and drummer Jim Eno in 1993, before going on to recruit other members and release a slew of critically acclaimed LP’s that prompted review aggregator Metacritic to rank Spoon as its top overall artist of the decade based on the band’s consistently high review scores between 2000 and 2009.

Daniel became reacquainted with small town conservatism while writing and recording Hot Thoughts with the band at a somewhat isolated cabin an hour outside of Buffalo, New York. “The sheer amount of Trump placards and lawn signs and billboards out there — it was all a revelation,” Daniel says. “I hadn’t seen that many Trump signs before that, just the odd one. But it didn’t take me long to realize, once we got there, that it was a movement.”

That setting, in part, inspired the anti-wall chorus on Hot Thoughts’ triumphantly upbeat tail-end track “Tear It Down.” Daniel was a bit hesitant about the tune, though not because he wanted to pull punches. “I thought, by the time the song came out, it’d seem outdated. I was sure there was no way he’d win, that people would hear it and think it’s too late for this song. But it’s not too late, and that’s unfortunate.”

However, Daniel was distracted from that politically charged muse when Prince died as the band was part-way through their Hot Thoughts sessions. “He would’ve had an affect on the album regardless, because he’s so huge to everybody in the band,” Daniel says, adding that his passing made that feeling “even more intense.”

“It made me go through a rediscovery phase. I’d go jogging, when we were at the studio recording, down this dirt path in the middle of the woods and listen to Prince bootlegs that I’d just gotten and never heard before,” Daniel recalls. Those late-night runs listening to the Purple One’s audible swagger were inspiring during what was a difficult period on many levels. “The way Prince could play was magical. I don’t know any other humans like that.” ■