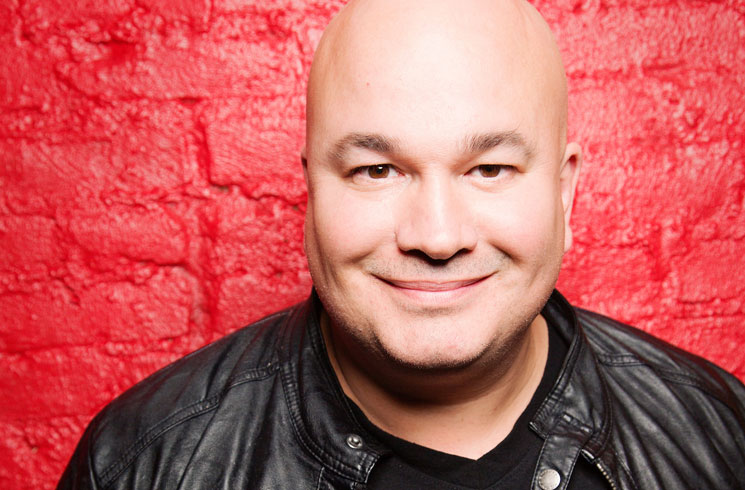 A frequent collaborator of Opie and Anthony and Dane Cook tourmate (as immortalized in HBO’s Tourgasm), Kelly has more recently been seen in a recurring role on Louie (he’s Louis CK’s brother and “bang bang” binge-eating buddy) and in the now-cancelled Denis Leary-led show Sex&Drugs&Rock&Roll. Despite that rap sheet, Kelly insists that reports of his nastiness have been greatly exaggerated.

“I try not to get… it’s like doing Sirius satellite radio, right?” he says. “You can say whatever you want. But if you’re saying the c-word or whatever, you sound like an ass! If you use it when it’s needed… it just has more of an effect. (…) We’re all pros, we all do what we do. No one has a B-plan. This is what I do. This is who I am as a comic, this is my voice and that’s who you get. That’s why you get booked. (…) I do some not-so-dirty jokes, too. They might be a little edgy, they might make you think a little out of the box, but it’s not like I’m going ‘Pussy pussy pussy, lick my asshole, I took a shit!’”

For his third career appearance on The Nasty Show, Kelly is sharing the stage with Jimmy Carr, Big Jay Oakerson, Godfrey and Yamaneika Saunders; the proceedings are hosted by Ari Shaffir.

“Dude, it’s crazy this show that they put together,” says Kelly. “You usually wait for the line-up and, you know, it comes out and it’s awesome. But this one, I was like ‘Why do you need me?!’ (…) I don’t even understand it. Ari’s like ‘Dude, after we do The Nasty Show, I’m goin’ camping. You wanna come?’ I’m like, sure, One nasty dude yes. He’s the most interesting guy — he’s my favourite. One of the funniest guys walking. He wants to go camping! We’re going to leave a beautiful hotel for two days and go camping. Together? I think he wants Bert Kreischer (Kreischer is a comedian now, but he was first — and perhaps best — known as the inspiration for Van Wilder) to go, too. Can you imagine the three of us in a tent, in the woods of Canada? Oh God.”

Despite its name and reputation, Kelly insists that The Nasty Show should be anything but daunting for audiences. “It’s a show that everybody can relate to. Man, woman, old, young, it doesn’t matter where you’re from, what you believe in… let’s just take the rules off. Not that there’s rules, but in your brain, we’re going to eliminate those rules. Anything can happen, anything can be said, and you’re okay with it — because you know what you’re getting into.”

In addition to his spot on The Nasty Show, Kelly is also going to tape an episode of his podcast You Know What Dude! during the festival.

“It’s gonna be insane,” he says. “My podcast is basically just a comic hang. When you see comics up here hanging out, cracking each other up, that’s basically what my podcast is like. I get a bunch of my friends and people I don’t know — I generally grab a couple of those — and we yap. The line-up hasn’t been situated yet, but I’ll probably be adding to it up until the last minute. Last time it was me, Colin Quinn, (Joe) DeRosa, Pete Correale and Amy Schumer showed up right at the end. It’s gonna be mean. I usually get the brunt of it, by the way.” ■