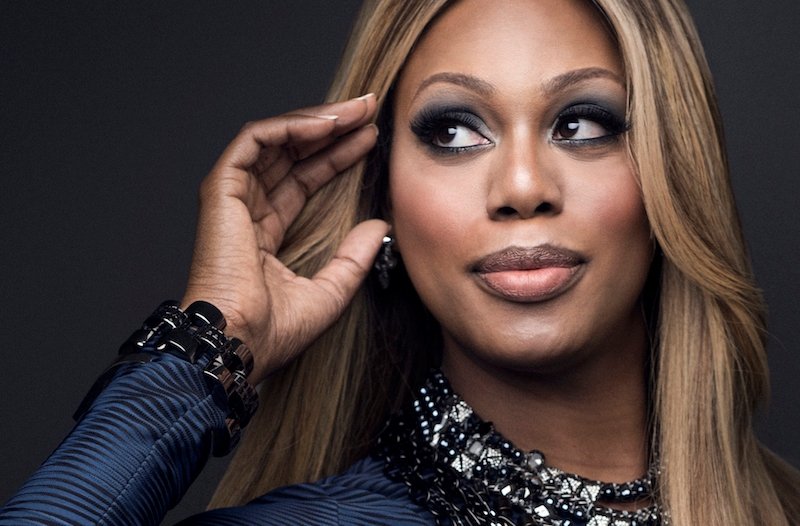 In the five years since Laverne Cox first appeared on the Netflix original series Orange Is the New Black as incarcerated transgender hairstylist Sophia Burset, she has emerged as one of the most visible faces (and voices) of the LGBT rights movement.

In 2014, she appeared on the cover of Time magazine as a representative of the Transgender Tipping Point that reflects the recent rise in public consciousness of transgender and non-binary perspectives and issues. When you listen to Cox speak, it’s easy to see why: she’s knowledgeable, passionate and relatable, and to top it off, she’s also beautiful.

Montrealers will get a chance to get to know Cox in person during her Just for Laughs gala this month. In anticipation of her appearance, we caught up with Cox by phone to hear more about OITB and the value of comedy during difficult times.

“Sophia has been such a good friend to me over the years,” Cox says. “She’s a character that in a lot of ways is not like me, but is inspired by some of the women that I know. She’s beautifully imperfect. With some of the decisions she makes and choices she’s made over the years, I’m like ‘Girl, really? You should not be doing this!’”

For Cox, one of the joys of playing Sophia is the impact the character’s presence in the show has on fans and audiences, for whom it’s still a rarity to see a transgender character portrayed by a transgender actor. Cox knows from personal experience that representation matters, and can save lives.

“I’ve often said I would not be here without Candis Cayne, who in 2007 became the first transgender woman to have a recurring role on a prime-time television show here in the States. That show was Dirty Sexy Money and that moment made me believe that it was possible for me to be openly trans and have a career as an actor. That moment changed my life and I know for sure I would not be here if it weren’t for Candis Cayne and that television show and that historic moment.”

Though many would consider Cox a role model, she doesn’t care for the term.

“I do like the idea of a possibility model,” she says. “The idea of opening up possibilities that didn’t exist before. I like the idea of folks looking at my rise over the past few years and maybe believing that it’s possible for them too, to be authentically who they are and to live their dream out loud. Opening up spaces of possibility is a really wonderful thing, and that’s part of what we’re doing and I’m very very excited about that.”

Carving out more space for trans individuals is a major concern for Cox, who understands acutely the urgency faced by a community who continues to weather constant attacks on rights as basic as existing in public spaces.

“When we talk about the media, there is an impression of visibility for trans people,” Cox observes. “However, even as we see this, trans people are still experiencing this unprecedented discrimination in real life. 2016 was the deadliest year on record for trans people. The great thing about the media is that it has the potential to change hearts and minds, so we need to get that work to the people who would commit violence against us, we need to get that information to politicians who are creating public policy and to judges who are making crucial decisions about whether or not we have a right to exist in public space. We need to not get it twisted — trans people have been under attack since we’ve existed, so this is nothing new. We’re more aware of it now maybe.”

Naturally, struggles for social justice tend to land in some pretty dark territory, but for Cox and the producers of OITNB, that’s exactly where comedy comes in and has the greatest impact.

“For marginalized people, we often use humour to keep us from getting really depressed,” she explains. “We need to laugh to keep from crying — sometimes it’s the best thing to do! I think that’s what the brilliance is of OITNB, too — we deal with a lot of really serious subjects in our show, but if it’s all sad and dire, like ‘Oh incarceration,’ and ‘Oh discrimination,’ then it’s a really depressing show. The humour is a way to deal, and it’s very real. For me, humour has been extremely healing over the years. Yes, life is serious but it’s not that serious. I can’t just live in this space of being depressed or being sad.

“There’s a lot going on in the world, but for today I’m alive and relatively healthy, and I have a lot to be grateful for, so let me find something to laugh about and be happy about. That’s really what I hope we can provide to everyone who comes out to our gala event for Just for Laughs, an evening to just let go and to laugh. If, in the laughter we can also inspire people to think critically about something they hadn’t thought about before, that’s a wonderful bonus. I love being able to walk that line of educating with humour. It’s a wonderful thing when you can find that balance, so I look forward to doing that.” ■