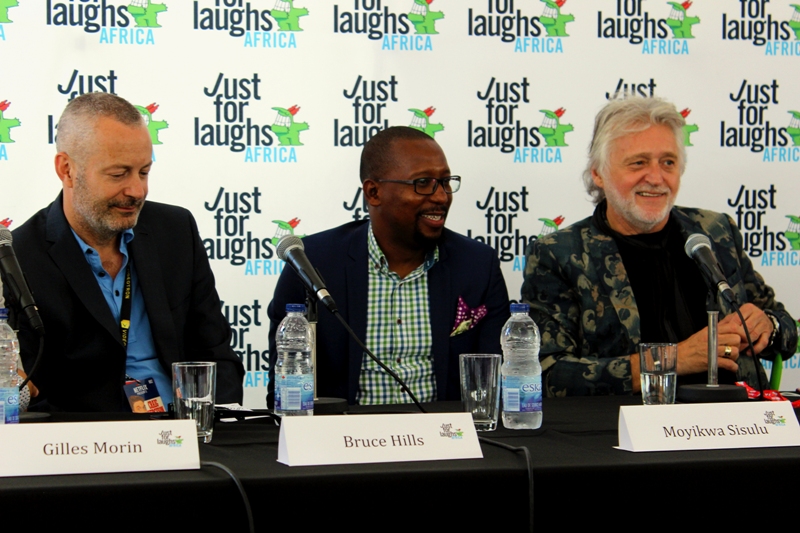 Just for Laughs has announced plans for a festival in Durban, South Africa, with July 2018 set as a tentative kickoff. The news was revealed via a press conference this morning at the Bar Charlot, located just outside Place des Arts’s Salle Wilfrid-Pelletier.

“While we look forward to starting in South Africa, we of course look to open it up to the continent at large,” stated an excited Sisulu. “We want to be [Just for Laughs’] representatives and advisories in the African continent, developing comedy in that space.”

“We’re really excited about this. Just for Laughs has taken great pride in having great South African comics at our festival,” explained Bruce Hills, JFL’s Chief Operating Officer, who repeatedly referred to the fest as “the Olympics of Comedy” during the conference.

The festival aims to showcase and develop the country’s wide range of comedy, while delivering the esteemed international talent that Just for Laughs has built a reputation in solidly supplying over its 35-year history. Additionally Just for Laughs Africa has plans to broadcast its events both in and outside of the country. As a brand, the festival has established itself within South Africa after broadcasts on both M-NET (widely regarded as South Africa’s HBO equivalent) and Comedy Central Africa.

Following the press conference, we had the opportunity to sit down with Hills:

Mr. Wavvy: Just for Laughs have done festivals everywhere from Chicago to Sydney to Toronto. What were the steps taken to decide on South Africa?

Bruce Hills: The first thing when you look to launch a festival is you want to be in a great city. You obviously want to have a community that wants to go out and see shows. And you need to have a great partner.

A large part of success in past festivals has been a partner we trust, knows the local scene and has the same values as us. That’s something we felt very comfortable about in this situation, but we also felt a larger calling here. I’ve had a soft spot for South Africa and the continent of Africa at large for as long as I’ve been around.

When I saw the burgeoning comedy community when I went there 20 years ago, I made it a point to my programming team to bring one comedian (from South Africa) every year. Even if they’re not to the level of the other comics, I’ve got to give them something to aspire to, and then we’re gonna help them do as well as they can at the festival. They need to leave for home with a tale to tell.

Now, not only are African and South African comics getting on shows, you look at one in particular, Trevor Noah. Not only is he a massive star in Africa, he has also become a massive star in North America and there is not a single ticket available for any of his three shows.

MW: I feel like Durban might not be the most obvious city of choice for a South African festival. Why go there over Cape Town or Johannesburg?

BH: First and foremost, you want a city that wants a comedy festival. We believe the demographic is perfectly built for coming to a Just for Laughs festival. Johannesburg, in our view, isn’t really the right city. It’s a real business city, very sprawling. It’s a challenge, no one felt confident. Cape Town was an option, but there’s already an event there.

We felt like we could own Durban and really take over the city, which I think is a key element of all of this. Like (in) Montreal, it’s hard to miss Just for Laughs. When we were in Chicago, as much as it was fun, you could miss us. It’s a massive city.

MW: Aside from helping grow and develop South African comics, will there be any other unique elements that make Just for Laughs Africa stand out from other markets?

BH: I don’t know what we’re gonna do yet. What we’ve learned with our other festivals is that we need to customize. There’s no plan yet, other than it being great! We have some tricks in our bag, things we know work. Most of the time is figuring out ways in which local talent can grow and gain exposure.

MW: Where do you see a project like this in five years’ time?

BH: Look at the continent of Africa, especially now in terms of comedy. When I first went to South Africa, you had to get the equivalent of HBO, M-NET, if you wanted to see comedy. It’s expensive. Translation: There weren’t a lot of comedy fans across the continent because it’s cost prohibitive.

Comedians tell me touring has changed because their content is on YouTube, because it’s free! [Laughs] Comedy’s out there, you know very well that francophone and anglophone comedy is growing in leaps and bounds. Even though it’s a challenging continent, to say the least, it is developing, and comedy’s developing right there with it. ■