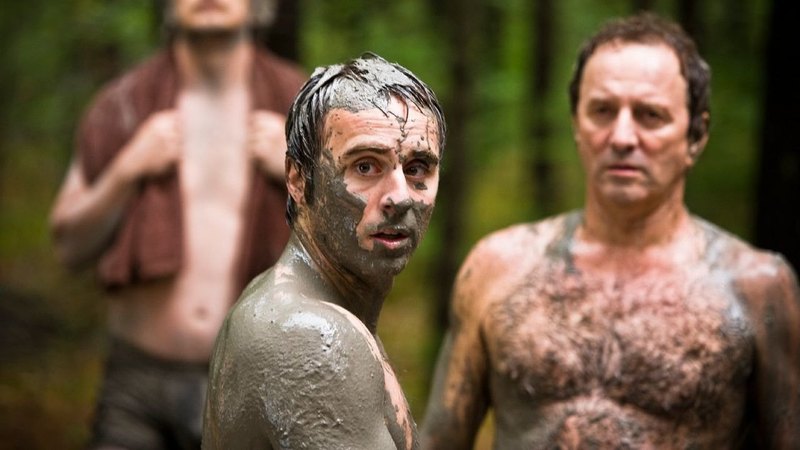 Some actors have to fake a rapport; that’s what acting is all about, after all. But when Louis-José Houde and Michel Côté sit down in front of me, I immediately get the feeling that there wasn’t much faking when it came to establishing their relationship.

The actors have reprised their roles as Marc and Jacques Laroche, a dysfunctional father-and-son pair of Montreal cops. After going undercover in a joint therapy group in the first film, they’re now forced to work together to tail a mobster (Patrice Robitaille) as he goes on a couples therapy retreat with his girlfriend (Julie LeBreton). The timing is perfect considering that Marc and his cop girlfriend (Karine Vanasse) are going through some troubles of their own. Jacques, nearing retirement, poses as an assistant therapist despite the fact that his methods are anything but subtle.

“I say it all the time,” says Côté. “We have the same values. He could be my son! I don’t know his father very well, but I’d like to spend more time with him.”

“My father is about five years older than Michel, but they have the same way of doing things,” says Houde. “The same values, but also the way they converse. It’s the same kind of music. When my dad tells a joke, it’s a lot like when Michel tells one.”

“It helps a lot to like someone when you’re teaming up to make a sequel,” Houde continues. “Sometimes you get to a set and you don’t know anyone – which is fine, you don’t need to get along with everyone – but it’s good to have trust in your partner.”

According to both of the stars, the idea of a sequel was never really floated until fairly recently. The first film was a hit, but it wasn’t until director Émile Gaudreault came up with a premise that it was even considered.

“I like that Émile didn’t jump on the idea of a sequel immediately after,” says Houde. “I like that he waited for an idea that would suit the characters. (…) When it happened, I really did want to read it first, but I was excited at the idea of doing it again.”

“It’s going to be hard to make a third one, even if this one is a big success,” says Côté. “Father-son relationships, sure. Couples, sure. But what else is left? In any case, Émile has plenty of ideas. When we did Le sens de l’humour, it was a very original idea – pretty special, and we had so much fun doing that one.”

The first act of De père en flic is considerably more action-oriented than the first film, even featuring Houde doing some atypical stunts during a foot chase and shoot-out. Though the opening is a tongue-in-cheek homage to brawnier action movies than what De père en flic 2 turns out to be, I mention that Houde is surprisingly convincing as an action hero in that sequence — but that the cinematic landscape doesn’t have that much space for action stars.

“I’m an enigma,” he cracks. “You never quite know what you’re getting.”

“We should be making more genre films in Québec,” Côté continues. “Horror movies, thrillers… why shouldn’t we make more of those? We make about thirty movies a year. Making good movies that no one wants to see is easier than making good movies that people want to see. If you want to make two box-office successes a year, you can’t just be making two movies. What if they both tank? I think the SODEC and Telefilm have to be aware of that, too; it’s nice when good movies go to festivals, but it’s nice when it works, too! (…) You don’t make a movie hoping it won’t work — or at least I don’t! I’m too prideful for that!”

“You always want things to make money,” says Houde. “What’s more annoying at this stage is — I wouldn’t call it a feeling of powerlessness, necessarily – we do what we have to do, and we’re just kind of… (Houde makes an indescribable sound akin to a cornered animal lashing out) There are so many factors: other movies, weather… All I want is good word-of-mouth, good reviews and butts in seats!”

De pére en flic was Houde’s first leading role in a film after a decade of stand-up success and supporting roles. He has since made a handful more, often straying from the rat-a-tat delivery that comprised his early stand-up.

I ask Houde if he felt a difference walking onto the set a more seasoned actor this time around.

“On the first day of shooting for the sequel, we shot the interrogation scene with Karine and Michel,” he says. “Michel was in the scene but I wasn’t interacting with him. All my stuff was with Karine, who I didn’t really know at the time, but from minute one I thought, ‘Oh, I know what I’m doing now.’ It’s more fun, too — I’m less nervous, more aware of what I’m doing. Everything I learn in each movie stays in me, which is great. It was a very comfortable shoot.”

“I told you that on the second day of shooting,” says Côté. “I told him he might not be noticing, but he’s really on a whole other playing field now. As far as I’m concerned, working with Rémy Girard or Louis-José, Germain Houde or Marc Messier, it’s all the same to me. That’s where he’s at. Even if in the first film he was a lot more green, you couldn’t really tell. He was perfect for the role, but he’d been maybe a little reticent. He was questioning a lot. (…) I couldn’t have messed with him between takes as much here as I did in the first one.”

“Yeah, he messed with me a lot in the first movie,” says Houde.

“And in this one, you messed with me,” laughs Côté.

See our interview with the film’s director, writer and producer here.