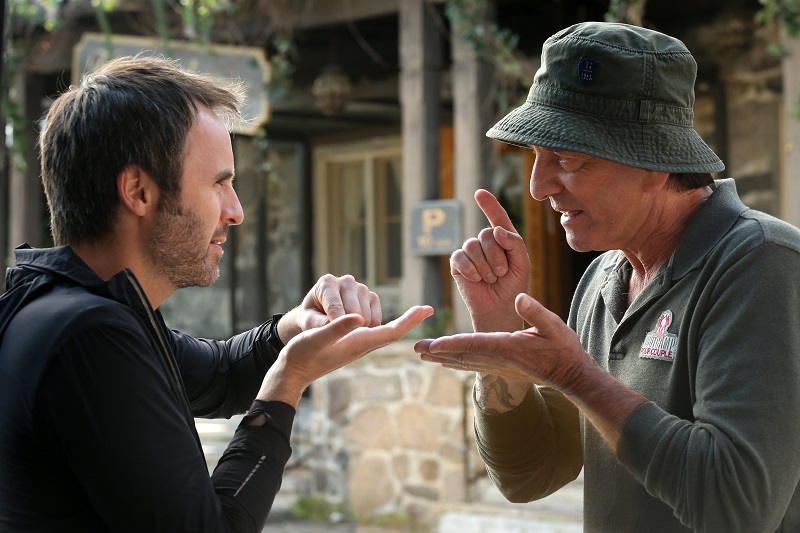 Émile Gaudreault is almost certainly the biggest comedy director in Quebec. Having originally risen to prominence as part of the sketch troupe Le groupe sanguin, he became a writer for film and TV and made his directorial debut with the romantic comedy Nuit de noces in 2001. Since then, he’s been the most prominent and productive director of mainstream comedies in the province, even going over to France to remake the first De père en flic last year. He had never, however, made the film with the idea of growing it into a series.

“I’d always seen the first film as a complete idea in itself,” explains Gaudreault. “I never considered that they could go undercover in another therapy group. I was jogging and thinking about ideas for another movie — I wanted to make a movie about couples therapy. I like therapies! In any case, I was thinking about casting for this movie and pairing up actors from my other movies as couples for this new idea and I thought of Louis-José and Caroline Dhavernas in the first film. I thought maybe I could work them into this new movie… and then I had a sort of epiphany. That’s the sequel!

“There was no urgency or even a need to make a sequel,” he admits. “I thought the idea had to become simply irresistible — there had to be no way we weren’t going to make it. If it’s irresistible for us, there’s a good chance it’ll be irresistible for audiences.”

“For years and years, it was theatre operators and distributors that were asking us for a sequel,” says producer Denise Robert. “When you make a movie, it’s always more interesting to make something new. We — and the actors — weren’t really into it. We didn’t really feel we were in this business of making sequels for the sake of making sequels. We make movies because we have a story to tell, not because of its commercial potential. That can be a trap, too. We’d all decided we weren’t going to make a sequel until Émile came up with this idea of a couples’ bootcamp.”

“What really interests me is to work within a sort of hybrid cinema,” says Eric K. Boulianne, who co-wrote the film with Gaudreault and Sébastien Ravary, “movies that exist somewhere between the mainstream and the arthouse. I went into this thinking I was writing a mainstream comedy, but without some of the preconceived notions that might come with that. It was a nice challenge in that way. With something like Prank (which Boulianne was also a writer on), you do have this notion that you might not be seen in every cinema in the province. With De père en flic 2, you have to wonder what you can bring of your own humour and your own cinema to a project like this one.”

De père en flic 2 is somewhat different from many sequels in that it doesn’t strive to go bigger and broader; this is not about the cops played by Michel Côté and Louis-José Houde striving to save the Jacques Cartier bridge from being blown up by terrorists. Its stakes are roughly the same as they were in the first film, which allows for a certain level of character development (and character-based comedy) that isn’t necessarily found in sequels where upping the stakes is the driving force.

“My goal was that the audience forget it’s a sequel after 10 minutes,” explains Gaudreault. “They have to be in this particular story and invested in this particular narrative. That’s really the challenge: what story are we telling, emotionally? That was a pretty intense writing job that essentially went right into the film shoot. Finding new, touching ways to expand on the relationship between Michel and Louis-José, that was a real preoccupation of ours. We even added some dialogue while we were editing the film to fully flesh it out.”

Gaudreault brought in his younger collaborators with a certain idea of using their voices to make a film that’s very much of its time. “Though Émile is very much young at heart, there’s an undeniable age difference there,” says Boulianne. “We don’t have the same references. We came in with a new idea of what a mainstream comedy could be, even when it comes to the pacing and style of the humour.”

I ask Gaudreault if he notices a particular rhythm to the film that’s different from the first film. “I don’t see it because the film’s rhythms are there at every moment,” says Gaudreault. “We absorb rhythms in life. When I’m home and writing, I don’t see it. But in life, because I love movies and television, it becomes a part of me. It’s not something I ever think about — it’s natural. I think the original is a movie of its time, as this one is.”  ■

See our interview with the film’s stars, Louis-José Houde and Michel Côté, here.