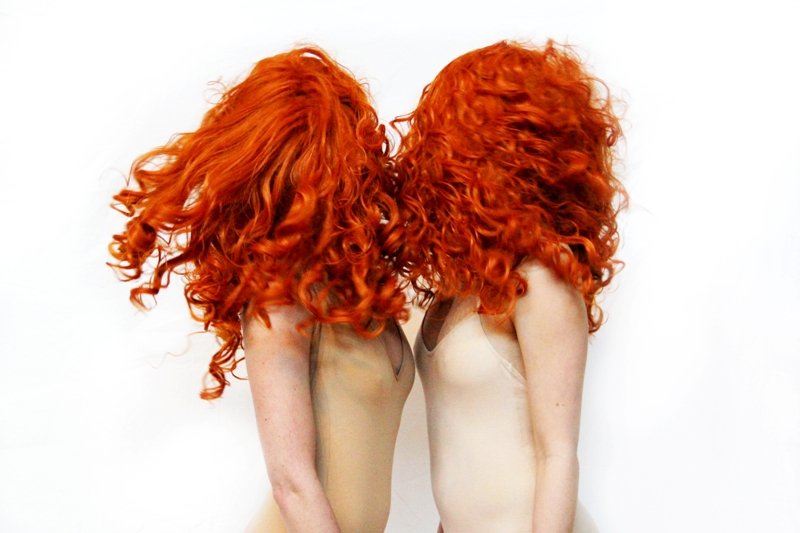 Ingrid Hansen and Stephanie Morin-Robert in The Merkin Sisters

Are You There Margaret? It’s Me, Gahd
Uma Gahd, the gap-toothed mother hen of the House of Laureen (and your favourite Drag Queen according to the 2017 Best of MTL readers poll), goes solo with all her wise but wide-eyed homespun goodness! It’s about the F word: family, feminism… and failed marriages.
Pompette (4128 St Laurent)

The Merkin Sisters
Ingrid Hansen and Stephanie Morin-Robert are indie Fringe queens, specializing in their own brands of whimsical storytelling through puppetry, dance and music. Now, they team up as the Merkin Sisters, recluse vedettes in flowing red wigs, emerging from retirement for a last hurrah.
La Chapelle (3700 St-Dominique)

Memento Mori
While writer-director Trevor Barrette made his Fringe mark with the sprawling superhero-space-rock-opera Captain Aurora, here he branches into immersive theatre territory by inviting audiences into a sombre “support group for the dead.” Solid casting includes Montreal mainstay Chip Chiupka and Sarah Segal-Lazar, who once hosted a musical in a funeral parlour.
Freestanding Room (4324 St-Laurent, #300)

Precinct: An Improvised Cop Story
First developed in the Montreal Improv trenches, Precinct is a narrative improvisational story set in the Plateau, “the toughest borough in the roughest city.” Partners John Calgary and Carl Boucher and their Sean Spicer-esque loudmouth boss Bill Garber solve crimes, as suggested by the audience.
Montreal Improv (3713 St-Laurent, #202)

Jon Bennett VS Jason Donovan
Aussie Jon Bennett makes audiences around the world laugh, cry and feel things with his Powerpoint storytelling. This is a Canadian premiere of a board game-centric show, inspired by a favourite Bennett target: faded pop star Jason Donovan. I would watch Bennett, a multiple Just for Laughs Award winner, do anything.
Petit Campus (57 Arthur E.)

The Detective, the Dame and the Devil
A noir detective story about gumshoe Ace Spadesy, a mystery lady and a vengeful husband. Like a hardboiled detective, I just have a gut feeling about this one. The team looks swell, too, with actor-writer-producer Scott Humphrey of the LARPs webseries, and director Stephanie Costa.
La Chapelle (3700 St-Dominique)

b3 : Syl-lo-go-ma-ni-e/a
The two darling clowns boKa and Mazy debut a bilingual tale about… compulsive hoarding. Performers/writers Kathleen Aubert and Simon Fleury make even the oddest things fun and touching. It’s for all ages, and a perfect introduction to the Fringe for children.
Théâtre d’Aujourd’hui (3900 St-Denis)

Divided Heart
Allie Weigh had me at the mention of her Magic Wand – and by the end of her two-minute Fringe-for-All pitch, she had won me over with a heartfelt monologue about parenting, the self and some violin. The NDG-based psychotherapist, who has spent 15,000 hours listening to others, now gets one hour for her confessional solo show.
Black Theatre Workshop Studio (3680 Jeanne-Mance)

Old, Fat & Fucked! Now What?
Puelo Deir has written entertaining fictions about gay life in Montreal, largely drawn from experience. Now, the scribe puts himself onstage to spin his own real-life stories, while growing grey and fat in a community that values the “young and slim.”
MAI (3680 Jeanne-Mance)

For the complete Fringe program, see the festival’s website