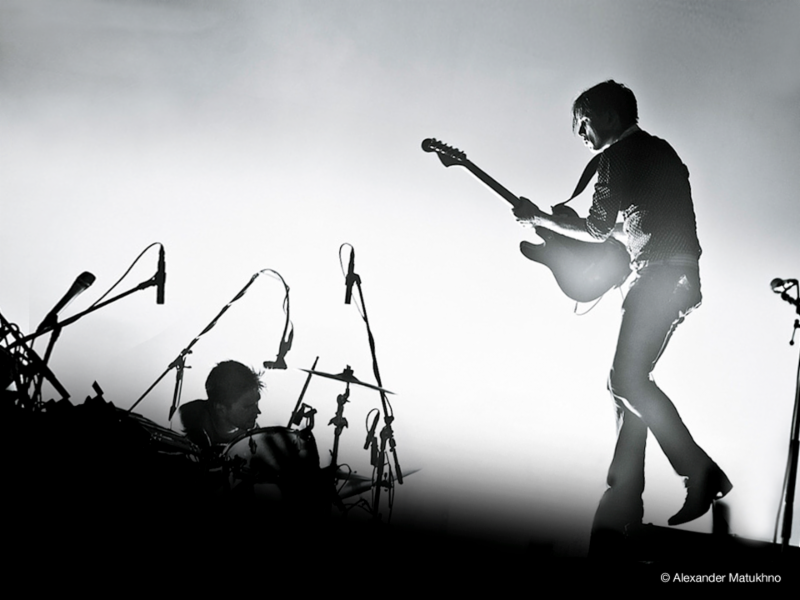 Over the course of 15 years, Scotland’s Franz Ferdinand have been one of the few bands to ride the ever-changing wave of rock music while always sounding exactly like themselves amd somehow never feeling stale.

They’ve seen a lot of change recently, too. After recording an entire album with cult ’70s band Sparks, Franz Ferdinand cofounder and songwriter Nick McCarthy announced that he would be leaving the band to focus on his family, leaving them to reshape in his absence. But as their recent Trump protest song, tour, updated line-up and upcoming album indicate, they like to roll with the punches.

Drummer Paul Thomson spoke to me about the band’s breakneck writing speed, how they’ve handled the transition phase, what 15 years has been like and how politics has been the focus for the band in recent months.

Owen Maxwell: What’s kept you guys off the road and out of the studio over the past few years? What were you up to and what brought you back finally?

Paul Thomson: Well we did the FFS project and that came together fairly quickly. We did that for a while and then Nick left the group. We needed a new member, and we found Julian (Corrie) who records as Miaoux Miaoux. Since last August Alex, Bob and I had been writing — we had 10 songs before Julian joined. Then it was 16 to 18 songs, we started recording and just finished it in London. Now we’re back on the road for four weeks and we’re going to mix the record, do some touring and have it out early next year.

OM: How has writing changed since Nick left?

PT: It’s completely different. You take someone out and replace them, and it changes. Their personality really leaves an imprint on the process. Julian is great and I’m a big fan of his music, and he was working for the BBC as an audio engineer so that made things a lot easier, when we worked in Alex’s studio. When it’s just the three of us, we involve friends, like Sam Porter of Late of the Pier, he was involved for a while and we hung out with him before moving on. We met Julian in Glasgow, we went for a curry together and the next day played in Alex’s studio and clicked immediately.

OM: What are the most interesting and unexpected changes that bringing Julian and Dino (Bardot) onboard have brought?

PT: Before we played together, everything was unexpected. We’re five shows deep at the moment so it’s getting better each night; it’s really solid at the moment and we’re having a great time. Little things happen when you’re not conscious of it and it’s the best part of playing live. It’s difficult to explain.

OM: Considering you guys are from Glasgow and the U.K. has dealt with its own fair share of political turmoil recently. what made you guys feel so compelled to write “Demagogue” about Trump?

PT: Initially the music was written, and the writing went on in the background. We made a decision whether the impact from the lyrics was going to be obvious or not. It was pre-election, and it wasn’t explicitly about Trump, so we knocked it together in a week and put it out digitally. Alex had Shepard Fairey’s email and asked if he would do the artwork and he said he’d love to — he’d done the Obama’s “Hope” campaign poster. We didn’t foresee what would happen so it’s all still out there.

OM: How was it seeing Jacqueline (on whom their 2004 track of the same name was based) taking a stand in politics recently?

PT: I used to go out with Jacqueline and lived with her. She’s worked for years helping people anyway so it’s not a massive jump. It’s amazing to see her as her council member so best of luck to her.

OM: What was the biggest lesson you guys pulled from working with Sparks? Any plans to collaborate with them again?

PT: It was a really positive experience because it was supposed to be a couple tracks, and with the speed it came together, we had 18 tracks. We decided we wanted our next record to go that quickly as well, so we used the same studio, RAK Studios. We ended up writing more stuff and worked with Philippe Zdar, who we’d approached before the third record. The whole production style was to make friends with us — he was just hilarious every day. Calling him a force of nature is putting it mildly.

OM: Since you’ve been playing for 15 years, what do you guys do to keep things fresh and exciting this far down the line?

PT: Certainly, going by the shows we’ve played the last couple days, the band has never sounded this good. It’s mostly just rehearsal, too. I played with Dino in another group, too, but the combination of personalities really seems to work. I don’t want to say it felt fairly effortless, because it took a lot of work, but the work part of it was really fun, so it felt easy.

OM: What’s your biggest hope for the next 15 years?

PT: The next 15 years? Just to continue writing. The creative process has been so fun for us, and so rewarding over the past months. It still feels fresh and new, especially with the new line-up, so everyone’s revitalized. We’ll probably continue writing this year as well. It’s not something we tend to do as much on the road — we just solely focus on the live show and enjoying being in a different city or country every day. A lot of the time we don’t sound check we like to wander around, since we love the travelling aspect. ■