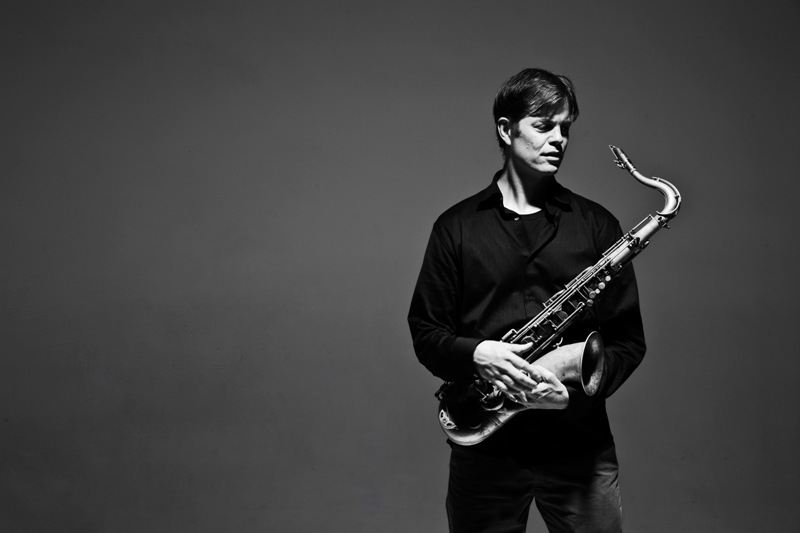 Although one name in particular has elevated him to full-fledged international stardom, Donny McCaslin’s resume is lengthy.  Having first made a splash at the Monterey Jazz Festival back in 1984 — when he was in high school — McCaslin has gone on to play with the likes of Gary Burton, Danilo Perez and Maria Schneider. The Montreal Jazz Festival is practically routine for McCaslin, whose saxophone playing specifically has three times garnered him Grammy nomination in the improvised solo category.

This year’s Friday night club date might court a little bit of a different audience by virtue of his participation in David Bowie’s final act, Blackstar. After Maria Schneider’s Orchestra (a group that McCaslin plays in) recorded a version of “Sue (Or in a Season of Crime),” Schneider’s recording schedule didn’t match up with Bowie’s and she suggested he look into McCaslin’s band, giving him a copy of their record Casting for Gravity. Bowie caught them at the 55 Bar in New York City and eventually Bowie’s ideas snowballed into an album.

I spoke with McCaslin last week about his whirlwind Bowie experience, his plans for future and his love for Montreal:

Donovan Burtan: Can you give us some general takeaways from the Blackstar project and the effect it’s had on you?

Donny McCaslin: It was about three months of me immersing myself in the music he was sending to prepare for the recordings and then the recording happened over another three-month period.  Once it was over, I didn’t know what was going to happen with it — with these things you never know. I just tried to do the very best I could with the work in front of me with Blackstar and be as creative as possible. Once that was over, I was really involved with writing my original music for Beyond Now which of course was influenced by that…as well as Deadmau5, Aphex Twin and Kendrick Lamar.

Fast forwarding to when Blackstar came out — David sort of put me forward to do some press interviews about it. It was remarkable to suddenly talk about this experience, which had been so profound and such a great connection between all of us musically and we hadn’t been able to talk about it.  Then the song comes out, the next song comes out, and then the record comes out and then tragically he passes away and it’s devastating emotionally.

Navigating through all that was a real whirlwind, but what I would say is it was a transformative experience and it’s changed my life.  The whole thing has raised my visibility and support with the press, audiences, promoters — it’s led to more touring opportunities as a bandleader. Last year, it was maybe about five months on the road and this year it looks to be about the same, so that’s an increase for me — I’ve been really busy presenting Beyond Now live.

DB: You have a Tiny Desk Concert and you talked about figuring out how to bring Bowie into your live sets — you did an instrumental cover of “Lazarus” there.

DM: That’s something we started once he passed away. I felt a real need to pay tribute to him from the stage. We had a weeklong engagement, about two weeks after he passed, that’s when we started playing “Warszawa” and it’s just kind of gone from there.  We’ve added different songs to our set-list from different points in his career often it is “Lazarus,” sometimes it’s “Warszawa,” we’ll do “Small Plot of Land” or “Hallo Spaceboy.” There’s five or six tunes that can rotate in and out of the set depending on circumstances.

DB: People constantly talk about Bowie’s big shifts in sound aesthetic and persona record to record and I think you’ve had a pretty eclectic career, too. For instance, the electronic influence on Blackstar was present on Fast Future, your record that came out before that. Do you think that this flexibility helped you connect with David in the studio?

DM: Absolutely. That’s a really good observation. Some of the early bylines were like “David Bowie does a jazz record,” but Blackstar is not a jazz record to me. Or even “…uses jazz musicians” and that’s true we’re jazz musicians but all of us have this diverse musical DNA. We have come up playing jazz music, improvised music, but also rock and electronic music and reggae — this wide base of influences. So that is a big reason why there was so much cohesion in the studio.

DB: I read that Bowie said something about jazz musicians being able to turn things on their head and put a different flair on a song. Was every tune something he wrote and then you guys sort of reworked it?

DM: They were all his tunes, and it wasn’t reworking. The demos that he sent were really strong. We were just basically realizing the demos and adding to them. For example, on “Lazarus,” that horn line that you hear at the beginning — that was David’s line. I just harmonized it, added a counterpoint line, put it in octaves — I orchestrated it, but that essential line that you hear was David’s line. The improvisation part was something that I did in the moment while we were playing.

Another example, the song “Blackstar,” I remember Mark Guiliana was talking about this — people would say “Guiliana comes up with this amazing beat for ‘Blackstar’” and Mark, being very humble, said “well actually I was just trying to realize the drum beat on David’s demo.” We were just realizing music that he brought in and he gave us complete freedom to do what we were hearing, but I think we were all starting with what he sent us as the template and just added to the template.

DB: What sort of things do you do to keep moving forward musically as you’re doing all these gigs?

DM: I’m listening to a lot of music and trying to find things that inspire my creative imagination. I’m actively writing songs, so I’m figuring out what the concept will be and trying to find stuff to listen to that will feed into that. That’s what’s going on on the creative side, and of course I just try and take care of myself when I’m out here and get some rest.

DB: The electronic music muse has continued with Beyond Now — do you see yourself continuing on that path in the future?

DM: I do. I mean I feel like there’s still a lot there. In the past couple months, my listening has kind of veered into the alternative/electronic vein, a little bit of metal, but yeah, I’m investigating different ways of songwriting so I still feel like there’s more to investigate, more to discover.

DB: You did bring in a vocalist for one of the covers on Beyond Now — do you see more of that in the future?

DM: I do. I’m a little reluctant to talk about it publicly, because it hasn’t totally come to fruition, but it’s in process, sort of TBA or something. I’m working on it.

DB: You’ve played Montreal Jazz Festival in the past, and since we’re speaking about artistic flexibility, I mean we have Anderson .Paak closing things out on the main stage. What do you think of a festival that floods the streets with different styles?

DM: I love the Montreal Jazz Festival. One of the most memorable gigs of my life was the first time I played there in 1988 with Gary Burton’s group — I had just joined. I graduated Berklee and we were doing a few Canadian festivals and I got the chicken pox, so I was sitting in my room in Boston sweating with pox scars all over, but I recovered enough to come up to Montreal.

I hadn’t played for like a week and the special guest of the Gary Burton quintet was Pat Metheny, so I got to play with him — it was awesome, man. I’ll just never forget that gig; it was at the old Spectrum. That was my first of many times in that city and I love it, the atmosphere. Montreal to me is one of the great cities in the world and I just feel like I’ve had a real connection. I’ve grown a lot there with hours and hours of playing gigs with Montreal-based musicians I’ve worked with over the years and groups that I’ve toured with. I love the festival, it’s great, and I love the diversity. ■