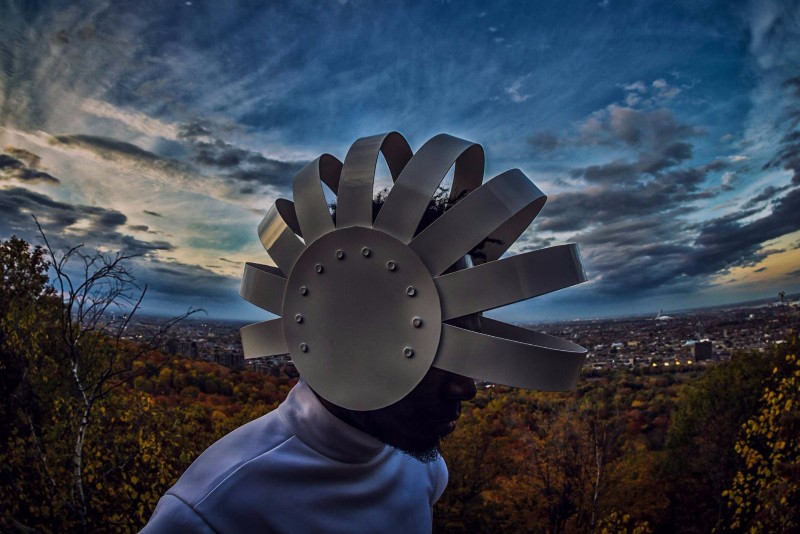 AfrotroniX is a busy character. The morning of our interview last Sunday, he arrived back from Europe from a quick trip involving record label meetings and a show in Martinique. The following day he is heading to the U.S. for festival dates, and returns to Montreal for a Jazz Fest show this Thursday.

He tours six months a year, so this grind is nothing new for him, but this week also heralds the arrival of his debut album, NomadiX — listen to it here.

Born in the Republic of Chad, Caleb Ritmobaye is a guitarist-vocalist born into a family of musicians. With his brothers and their band H’SAO, Ritmobaye’s family immigrated here after finding success in Quebec’s music competition scene. Without getting into details, the artist also mentions the struggles endured in his homeland and explains his family took the best opportunity they had to make a new home here.

His evolution as a solo artist working in the field of electronic music has been quiet but steady. American producer Brian Kennedy, who has helmed projects from Rihanna and Chris Brown, among many more, discovered AfrotroniX on social media and was so impressed by the sound that he flew to Montreal on his own dime to meet the talent and work with him in his Ville Emard home studio.

So maybe you don’t know AfrotroniX yet, but the rest of the world is paying attention. Before checking out his free show — in which Ritmobaye DJs, sings and plays guitar, accompanied by a drummer and dancer — get to know him in his own words. And then get ready to dance.

AfrotroniX: At its root AfrotroniX is a concept with a philosophy, and Afrofuturism is what I’m trying to bring to the forefront with that, or to present Africa in a different way, in another figure that is less represented. As you said, people’s ideas of African music can be diverse, but superficial. There is more than djambe and so forth. There are styles that are less known, but people don’t necessarily pay attention. So “African music” as a term becomes one reference that lacks insight.

DM: How do you keep the integrity of the sounds you’re looking for intact with the modern technology you use to create it?

AfrotroniX: Where I’m from, Chad, is between the North and South, so we are influenced (by both). I’ve always loved electronic music but when I was younger I had no way to make it, though I have always played guitar and piano and created music. In the 2000s after I had moved to Quebec I made beats for tons of rappers and soul singers and stuff like that. Then I decided to push myself because I really loved electronic music. I’m an electronic engineer, so anything digital is in my wheelhouse.

So Nomadix, my new album, is a voyage. It’s a little cleaner (than earlier AfrotroniX experiments) and is based in a style that is a little more laid back, but I wanted to stay rooted in sounds loyal to the African influences and use the electro to serve as a base with respect to that — a little less thrashy and a little more traditional or reserved.

It’s not really an EP I guess, but I had a mandate to fulfill and now I want it out, like let’s go. The record companies want something specific and they like it, but I have plans for the next moves and I have a message and I won’t compromise that. Whoever I work with has to understand what I am trying to do. People who come to me and understand distinguish themselves, but for now I am fine doing this alone.

DM: Obviously I can’t understand a lot of the lyrics. What are some of the themes explored?

AfrotroniX: Africa’s story was written by its conquerors, those that arrived and gave us names. “You’re Chad, you’re Cameroon,” as if no one existed. I’m trying to do what Sun Ra did, to give us back our heritage – an Afrofuturism where Africa decides for itself and everything is possible. I also talk a lot about women and their importance. In our culture, mothers are sacred. She is the most important person in the family. But in outside society, we don’t talk about that. That stays in the house, and outside, dad is the boss. So I have songs speaking about the power of women, and how we need to embrace it and not hide it or fear that.

Another big theme is spirituality. Africa went through a double colonization, if you will. The Arabs arrived first, and convinced our ancestors that their spirituality was false, that to worship nature was to anger God. People changed their names, adopted Islam. We had a name for God, but no religion before that. The word today would translate to “energy” in French or English. We felt God in the sun, in the energy of trees or water we drank, in the sounds of nature. God was everywhere and not one person could claim to “know” God. It was a religion with no prophet, and God speaks to each person differently. We did not have a concept of God belonging to one house or speaking in one voice. And I am singing about this because today in Africa, identities are so based in (organized) religion that if you say one wrong word about God, or Jesus, or Mohammed, it’s war. The question is: who were we before they came?

DM: Please explain your costume, specifically the helmet. It has a very Parliament-y feel.

AfrotroniX: For sure! It comes from a custom native to the Sar tribe, my parents’ tribe. To become an adult, male children go to the wild, to the bush, and spend three months enduring feats of self-endurance. It’s a little like the military, here. When they succeed, they have proven themselves valid protectors for a family and have the right to marry. And when they have succeeded, they wear a helmet like this, though it is made of straw. When I think of Afrofuturism and my place in it, I feel ready to perform the mission I have chosen, and I feel the helmet represents that. Also, it keeps me anonymous, because my mission is bigger than me. ■

AfrotroniX performs as part of the Jazz Fest at the Hyundai/CBC stage (Clark and de Montigny) on Thursday, June 29, 10 p.m., free