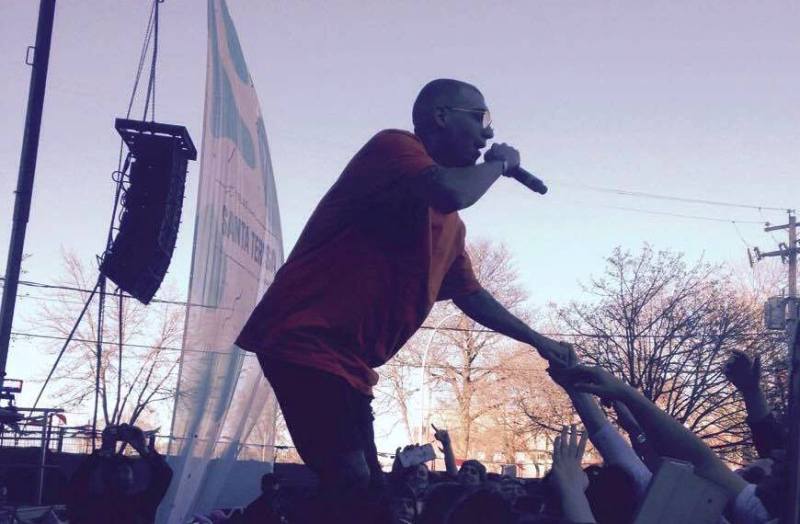 This past weekend saw the first edition of the Santa Teresa music festival, located off the island in the North Shore town of Sainte Thérèse, but close enough to court Montreal music fans. The three-day, multi-venue event brought in some serious talent from Montreal and elsewhere in Canada, making for a promising start for an ambitious festival.

The first two nights saw a lot of bar sets and late-night activity, which didn’t completely align with the transportation system — unless I had taken the 2:30 a.m. charter bus. On night one (Thursday, April 27), the headlining show by City and Colour was sold out, and the competing acts were pretty amateurish. But I caught a pair of fantastic bands on Friday evening and everything clicked in on Saturday, when I witnessed six really strong performances. The timing seemed great for some of the newer bands, late April being right in the heart of spring’s new release season — a handful of acts on the bill were pushing fresh albums.

Next year, it would probably be best to plan a Saturday/Sunday event with loads of outdoor activity, but overall Santa Teresa was a great success that could serve as an affordable way to get out of town and catch some music for years to come.

Saturday’s outdoor festivities kicked off with a bang from Rymz. Sporting drummer, hype man and auto-tune microphone-armed DJ, the young rapper’s crew delivered relentless energy to a small but exuberant crowd. Admittedly things got a bit formulaic and the group pandered to their crowd with a quick, messy encore. Still, a hype crew inspiring young fans always ought to bring a smile to one’s face and serves as a great start to a long day of music.

For a band fresh off their debut release, Hoan put together a smart set that showcased instrumental prowess without distracting from Alexander Nicol’s capacity for reserved vocal work. The set ended with stretched out grooves that made for a brooding cacophony with enough bite in the kick drum to get the crowd moving and inspire gut-spilling yelps from Nicol, but the group began things carefully to make for a nice development over the course of the performance.

At one point, Nicol took a step into the spotlight to offer beautiful tenor lines over gospely keyboard chords and delicate pedal work from lead guitarist Oussama Laghzaoui. The group certainly needs to go through a little bit of growing pains. Post-punk fills a lot of what they do and they haven’t forged an entirely unique voice, but they clearly have the talent to do so. 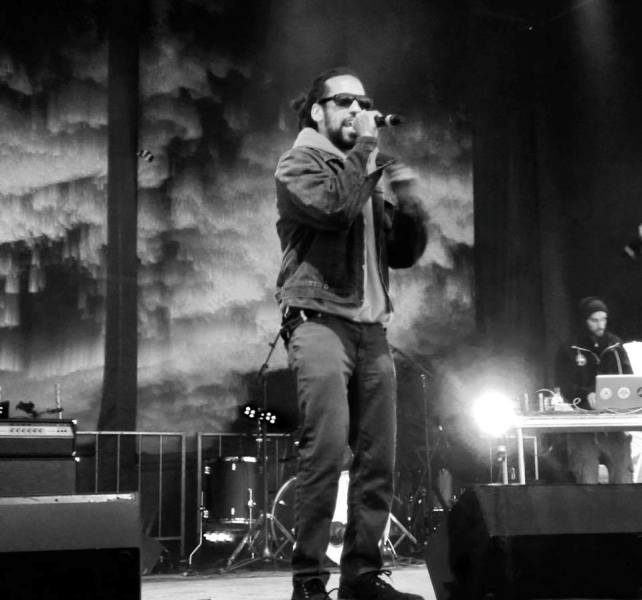 Alaclair Ensemble’s eccentric eclecticism made for a set of pure fun and bodacious hilarity. The quartet came out with choreography to the sound of “Jump on It,” before trading blistering bars for a string of hard-hitting, throwback beats. The group’s request for hugs for the  slow jam and some goofy dance moves epitomized their slightly tongue-in-cheek manner, but elsewhere the crew was all business with biting verses over pummeling beats.

I only managed to snag about 20 minutes of Aliocha’s performance, but that was enough to raise the young singer onto my radar. His slightly Western vocalizations find an interesting place against his band’s Radiohead-influenced approach to instrumental texture. Ear worm choruses were uplifted with freaky soundscape guitar playing and pulsing keyboard work and a couple of acoustic numbers showed promise in the Aliocha’s songwriting talents. They’re definitely an artist worth checking out as they hit all the bars over the course of the summer.

At first, Wilsen seemed to have a bit of trouble with the 50-foot-high ceilings of the town’s church venue. The huge excess of reverb made for a soupy mix for a couple songs, but when lead singer Tamsin Wilson took on one song solo, her songwriting seemed to come full-circle. A slightly left-field collection of chords underpinned eerie whistling that capitalized on the space for a truly breathtaking moment. Upon their return on the next tune, the band made some adjustments to better suit the space, complementing Wilsen’s climactic high notes with driving folk grooves. Like Hoan, Wilsen just released a record in Montreal this weekend and this performance deems it a must-listen.

Having been active on the scene for 10 years, Suuns are seasoned performers and their Friday evening set really brought the house down for an enthusiastic crowd. The quartet emerged in a hazy mess of noise, before sucking all the air out of the room with their smoldering, industrial grooves.

Each member of the band seems to bring a different flair of genre into the droning, immersive mix. Frontman Ben Shemie treats his guitar like a ragdoll, evoking noisy chaos against the stagnant, metal-rooted arpeggiations from guitarist Joseph Yarmush.

Drummer Liam O’Neill decorates his drum machine foundation with relentless passion and pummeling cymbal work to place a human touch atop the electronic mass of sound. Tunes off last year’s Hold/Still felt superbly fresh, and judging from the rousing crowd response, the group is sure to remain one of Montreal’s most exciting rock groups. 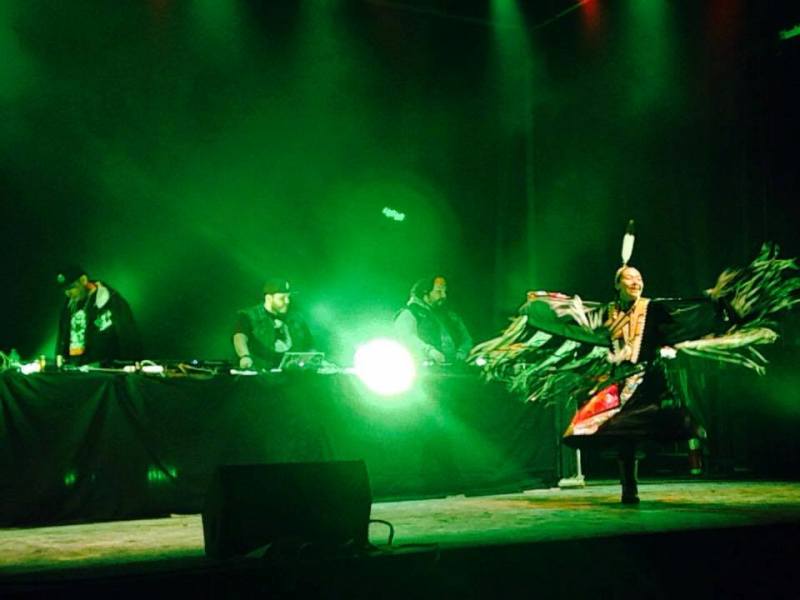 A Tribe Called Red’s latest project is a concept album with a clear narrative and more emphasis on verse/chorus pop form than the group’s past records, but their live set still operates in their usual DJ way. Save the sampling of a few melodies and features from We Are the Halluci-Nation, the set was a hard-hitting rave that didn’t let up for a complete hour — the perfect finale for a large, outdoor stage.

Besides their trademark incorporation of indigenous drums and chants, the trio pulled from all over the place including grime, reggae and hip hop, making for a wide variety of grooves and melodic content. Some of the more sing-able choruses were accompanied by their dancer, who combines b-boy and indigenous traditions — always sparking a wild response from the consistently rambunctious crowd. The group is highly multifaceted and their ability to both throw the hottest party in town and construct albums worth sitting down and digesting is sure to lead to continued success in the coming years.

Watson and company arrived armed and ready for the massive church setting. The set began ominously with a solo from one of his backing vocalists over pounding tom drums and abstract guitar styling, before Watson sparked up a collection of electrified rock tunes, interspersed with intimate moments at the piano or acoustic guitar.

Around the middle of the set, Watson and his band set up tiny-desk style around a single microphone with a bunch of acoustic instruments. Guitarist Joe Grass helped out on vocals for a couple of verses with a backing singer jumping in for some beautiful harmonies at the chorus. His drummer also took centre stage to offer an impressive and unexpected singing saw solo, before the group had a bit of fun making up a song based on an audience-inspired title. After that, Watson finished strong with his usual set-up earning him a rousing crowd response and certainly the most potent band performance of the day. ■