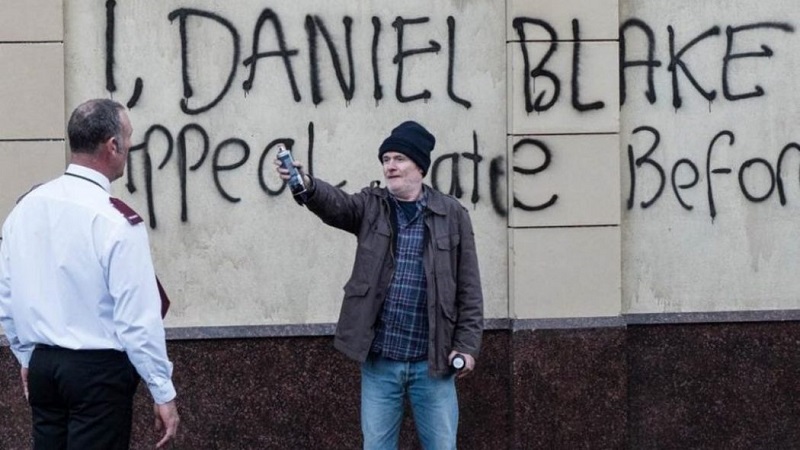 Dave Johns in I, Daniel Blake.

Audiences are trained to want consistency from renowned filmmakers. Those who deviate from what’s understood as their “typical output” risk not only alienating viewers but could technically put their careers in jeopardy. No one really wants, say, the Dardennes to make a sex comedy, but it’s also bizarre to assume that filmmakers are comfortable doing the same thing over and over again.

Though Ken Loach spent decades making thoughtful, minimalistic social dramas, his last few films have strayed considerably from that description. He directed a couple of uncharacteristically cheery, crowd-pleasing comedies (Looking for Eric, The Angels’ Share), a war drama with overt thriller elements (Route Irish) and a soporific let’s-save-the-rec-centre period piece (Jimmy’s Hall), all of which dealt with themes that recur in Loach’s work using genre trappings that do not.

One can’t really fault Loach (who’s in his 80s by now) for wanting to stretch his wings a little, but his new Palme d’Or-winning film I, Daniel Blake finds him back in familiar territory. I, Daniel Blake feels almost like concentrated Loach: all of his usual concerns and peccadilloes pared down into one lean cinematic protest song.

Daniel Blake (Dave Johns) is a middle-aged construction worker living in Newcastle. On leave following a serious heart attack, the recently widowed Blake finds himself needing to prove to the government that he isn’t fit to return to work yet in order to get benefits. Stuck in the byzantine application process, the technology challenged is put in a untenable Catch-22 position wherein he is deemed ready to go back to work by the government, yet unable to return to work by doctor’s orders. He befriends a down-on-her-luck young woman named Katie (Hayley Squires) who has recently been relocated to Newcastle after being kicked out of her London apartment. Katie and her two children become a source of devotion for Blake as he’s shuffled around in the English benefits system.

I, Daniel Blake is upfront in being an angry, accusatory film whose chief purpose is to call out injustice and social inequality. Again, nothing new for Loach, but what’s perhaps most striking about I, Daniel Blake is the precision and determination of its anger. The scenes of Blake trying to navigate the endless paperwork and beige cubicle culture of unemployment have a nauseating familiarity to anyone who’s ever been in that position (and, by the looks of it, our system works much, much better than the U.K.’s) — Loach spins quiet horror out of the most mundane situations. Unfortunately, I, Daniel Blake works much more powerfully as pamphleteering than fiction.

In their attempts to make the injustices of faceless bureaucracy the central thesis of I, Daniel Blake, Loach and his frequent collaborator Paul Laverty take the characters through some pretty hacky twists and turns. Though the film has the steady, unsentimental feel of Loach’s best work (unadorned camerawork, minimal music, naturalistic performances), the script takes some turns that are really more at home in second-tier Sundance also-rans. It’s really, truly impossible to discuss what happens in the film without spoiling it, but I, Daniel Blake never really follows through to the hacky, semi-sentimental ending it sometimes promises.

Part of that is due to Loach’s evident anger, and another is simply his mastery behind the camera. His style is deceptively simple, and yet it’s the only way to truly balance its venomous social critique with the more conventional aspects of its narrative. Loach also gets a terrific performance from Johns. As a stand-up comedian with relatively limited dramatic acting credits, Johns might seem like an odd choice for a dour social drama, but it’s precisely this lack of frills that takes the character of Blake from object of pithy to borderline folk hero. Prickly and easily angered, Blake seems hardly worthy of our pity (at least compared to Katie) ad yet it’s exactly this righteous anger and gruff misanthropy that makes him such a compelling figure. Johns brings some humour and levity to a film that easily could have gone without.

I, Daniel Blake was a surprise hit in the U.K., grossing $12-million U.S. (Loach’s career high) and sparking actual social debate about the flaws in the system. This, in itself, is remarkable in 2017. That fact pretty much cements whether or not I, Daniel Blake does what it intends. It’s heartbreaking, depressing and powerful… but it’s also definitely middling when it comes to Loach’s entire filmography. Still, when one of your minor works causes politicians to tear their hair out, it’s hard not to see it as a victory. ■

I, Daniel Blake opens in theatres on Friday, May 5. Watch the trailer here: