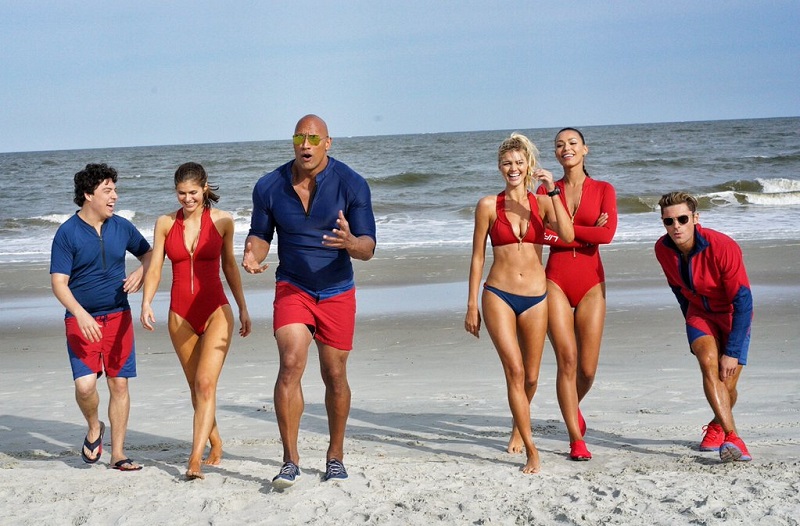 It’s logical to expect irony from a 2017 reboot of Baywatch. Though it remains an insurmountable cultural touchstone of the ’90s, it doesn’t really have a cult following. Baywatch is a punchline in itself, a knowing smirk shared by pretty much everyone who was ever on it and everyone else who watched it. The most logical way for this new Baywatch movie to exist is as a knowing, self-effacing comedy in the 21 Jump Street mold that uses the far-fetched premise as a jumping point.

That’s certainly what I expected from Baywatch, but it isn’t what Seth Gordon and the film’s writers delivers. Baywatch is weirdly respectful of its source material, so much so that it instead comes to life as a lightly comedic action movie about lifeguards. Large swaths of Baywatch are entirely unfunny — and not because the jokes suck, but because there are basically no jokes.

And also what jokes are there suck. But we’ll get to that.

Lieutenant Mitch Buchannon (Dwayne Johnson) runs the lifeguarding department of “the Bay” with an iron fist. He’s great at lifeguarding and super buff, but what he prides himself on the most is how well-oiled his department is. One new recruit is hired annually, but this year they’ve made space for three: chubby-but-determined dork Ronnie (Jon Bass), lifelong aspiring lifeguard Summer (Alexandra Daddario) and Olympic swimmer Matt Brody (Zac Efron), a disgraced champion who takes the job as part of a plea bargain. Mitch’s higher-up (Rob Huebel) thinks taking on Brody would be good for PR, but the two shredded-like-lettuce leads butt heads over their rather different work styles. Meanwhile, a rich socialite (Priyanka Chopra) may be running drugs and planning to buy out all the property in the bay, taking the beach from the people and putting it in the hands of the elite, which angers Mitch greatly.

All of the Baywatch signifiers are here: slow-motion running, babes in red swimsuits, extremely oily men with tanned torsos like greasy walnuts, elaborate dramatic scenarios (that would never in a million years be handled by lifeguards) and cheesy power ballads. Even though the characters often directly comment on the absurdity of their being embroiled in matters that should generally be the domain of police, the meta-reflexivity of the film is mostly lazy and uninspired. Though weirdly beholden to aspects of the original (like keeping character names), it often feels anonymous and safe.  Both David Hasselhoff and Pamela Anderson appear in cameos so completely superfluous they could have just added their names to the credits and never bothered actually filming any scenes.

Apart from an early scene where Ronnie gets his boner caught in a beach chair that unfolds with sub-Farrelly panache (doubly bizarre that a movie starts with such a literal boner jam sequence never returns to anything remotely close to that; imagine The Fate of the Furious opening on the gang retrieving a butt plug lost up Tyrese’s ass), all of Baywatch’s setpieces are essentially straight action sequences with half-assed attempts at wit thrown in. There’s certainly a bias to my interpretation here; I was probably hoping to see a variation on the 21 Jump Street formula where both of the leads are ripped dudes (as opposed to just one). What I found instead is essentially a straight adaptation of a dumb Baywatch plot shot like a Toyota Yaris commercial where Efron essentially plays the dolt to Johnson’s straight man. There isn’t that much deliberate comedy here, which begs the question: why does anyone think that there’s an audience for a monotonous action-comedy about lifeguards that’s somehow completely reverent to a show that no one really seems to care about?

On one hand, it’s kind of weird to see a movie that has this kind of begrudging respect for its source material; on the other, it’s fucking Baywatch. By the fourth time the plot ground to a halt so the characters could perform some random-ass task like pulling some children from the bay, I lost all hope that this might be subversive in any way.

Though its cast is fairly likeable, much of the supporting players fall by the wayside as the film transforms into a begrudging-buddies action comedy with two stars that don’t have much chemistry in the first place. As always, I’m surprised by Efron’s comedic chops, but Channing Tatum does the ripped comedic dolt thing way better, and Johnson isn’t doing anything differently than he would in an ostensibly much straighter movie. This is a movie that manages to waste Hannibal Buress in a role that should have been nothing else but Hannibal Buress stealing some scenes in a crappy comedy.

But what exactly the fuck is the deal with Baywatch? Is it so deeply post-irony that it comes out the other side like some sort of poptimist freak show convinced that Baywatch is actually, somehow, deeply and very secretly dope? Is it some sort of attempt to appropriate the fundamentally lame aspects of Baywatch and make them cool again? Is it actually so bad at being ironic that it forgot to put jokes in? I’ll admit that it’s a lot of fun to think about exactly what kind of warped thinking led to a movie starring a pro wrestler and several supermodels being actually kind of boring, but it’s not fun to have to sit through the damn thing in order to have those thoughts. How can something feel like such a colossal clusterfuck and simultaneously be so safe and boring?

My expectations for Baywatch were not high. In fact, I doubt anyone on Earth is truly looking forward to Baywatch as anything other than a dumb, raunchy comedy that can be easily enjoyed while home sick with the flu. In fact, Baywatch is exactly the opposite of that: it’s an extremely boring action movie with funny people in it who sometimes do funny things but mostly do action things and once in a while touch a dead man’s penis or puke in a pool. I don’t think I would necessarily have enjoyed the ironic 21 Jump Street-ed version of the movie that I was expecting, but at least that one wouldn’t have a 10-minute-action sequence of the Rock saving people on a burning ship where the only joke is that one of the women he saves wants to kiss him. ■

Baywatch opens in theatres on Thursday, May 25. Watch the trailer here: