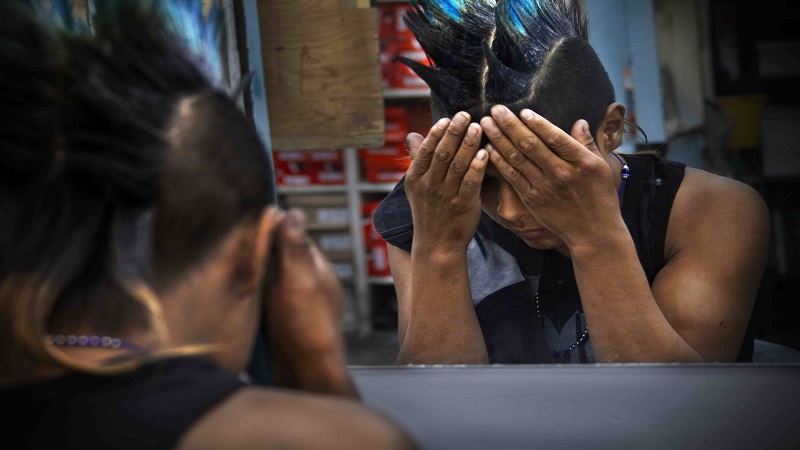 Juan Andrés Arango’s X Quinientos is a three-pronged look into the parallel lives of three migrants. In the first segment, we follow David (Bernardo Garnica Cruz), a young man from rural Mexico who moves to Mexico City and befriends a gay punk, leading him into an underground scene miles removed from his rural experience. The second segment follows Alex (Jonathan Diaz Angulo), a young Afro-Colombian man who returns from the U.S. and attempts to make an honest living as a fisherman, only to constantly bump up against Buenaventura’s tenacious criminal underground. In the third segment, we follow Maria (Jembie Almazan), a Filipino teenager who arrives in Montreal to live with her grandmother and falls in with a rougher crowd than she seems prepared to deal with.

The parallel approach also suggests that Arango could’ve picked any three places in the world to build his film around, but the choice is ultimately somewhat of an autobiographical one.

“I chose these three cities because all three are places that I’ve lived in as an immigrant,” he says. “I’m Colombian, but I’m from Bogota, in the mountains. It’s a very different world from Buenaventura, where the film was shot — the actors in that movie were from there. I discovered Buenaventura when making my first film, but recently I started going there more and more and exploring it in depth. That experience of coming in from the outside really informed the film.

“I lived in Mexico City for a year as well, and of course Montreal, where I live now. In X Quinientos, I wanted to explore identity, but also hybrid identities that grow in large urban centres. People — mostly young people — adopted imagery from elsewhere and adapt them to their reality. That mutates their identity.

“I also thought that Buenaventura, Mexico City and Montreal are especially charged with these ideas. Buenaventura is a port city with a lot of boats coming in from elsewhere, but it’s also inhabited with the imagery of African-American culture. The population is mostly black, mostly Afro-Colombians, and the younger people are more drawn to the imagery of American rappers or basketball players than anything Colombian. Mexico is so enormous, it’s like a hub that attracts every indigenous group from Mexico. It’s a very hostile environment in a lot of ways, and you wind up seeing young people inventing their own identities as a sort of resistance. Montreal, of course, is a place where multiculturalism is the status quo, and there are always groups immigrating and making a place in different spaces in town.”

It’s something of a challenge for Arango to make such a far-ranging film, one that unfolds in five languages (at least two of which Arango himself does not speak). To further complicate things, he utilized only non-professional actors culled directly from the communities depicted in the film. “First of all, I never made any of the actors learn dialogue,” he explains. “Instead, we’d find the dialogue together. We’d talk it out before filming each scene, explain their motivations and explore them together. They had a lot of freedom in that sense. I also had an interpreter with me for all the scenes in Tagalog or Mazahua. I knew what had to make it in and what had to be changed, and I worked with them on that. (…) I’d never done that before. My first movie was just in Spanish, and a lot of it had to do with finding the right person to work with, someone I could trust.”

Arango spent the better part of two years researching for the film, particularly for the Montreal segment, which is set in a community further removed from his own experience as a South American. “I started doing research about ex-pat Filipino communities and I discovered there were some very interesting connections between the Montreal Filipino community and how they felt excluded and could not relate to their own national identity, and how some young people start dressing like Latin-American street gangs in order to forge their identity.

“For two years, I was slowly contacting people in the community in order to establish contact. I’d get in touch with community centres, unions, cultural centers, seniors’ homes in Côte-des-Neiges, and then I started spending a lot of time there, observing interactions between people in public spaces. I also spoke a lot with people, but not really formal interviews in any sense. I just started chatting with people and befriending them, if you will, in order to go eat where they eat, dance where they dance…

“It’s through all of these stories and observations that I wrote the first version of the script. Once that was done, though, I returned to those places and started casting and testing the version of the script that I had against this pre-casting that I had done. That allowed me to really see what worked and what didn’t. I could figure out what looked organic when they did it as opposed to what looked artificial.”

In that sense, Arango spends much more time on pre-production than on the actual physical act of filmmaking. “It’s one of the aspects of my work that I like the most,” he says. “It allows me to live in a reality that isn’t my own and be able to talk about these realities. But to be able to talk about those realities, you have to make sure that you have something to say, and that what you’re saying is pertinent.” ■